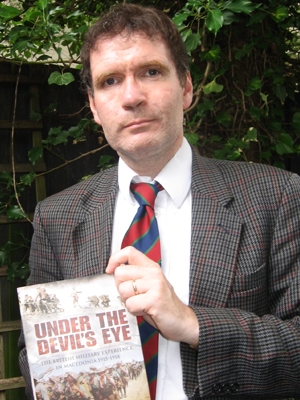 Alan Wakefield was born in Marlborough, Wiltshire in 1968. He graduated from the University of Reading in 1990 with a degree in History and followed this with an MA in War Studies from King’s College London. Having worked as a curator at the National Maritime Museum and RAF Museum, Alan qualified with an MA in Museum Studies from University College London. Between 2000 and 2016 he was employed as a curator and then Head of the Photograph Archive of the Imperial War Museum. In August 2016, Alan was appointed to the position of Head of First World War & Early 20th Century Conflict at the IWM. In this post, Alan is in charge of a team of seven curators and historians charged with responsibility for all historical and collections output at the Museum relating to the period 1900 – 1929.

In 2004 he co-authored Under the Devil’s Eye: Britain’s Forgotten Army at Salonika 1915-1918 for Sutton Publishing (republished by Pen & Sword in 2011) and in 2006 Christmas in the Trenches 1914 – 1918 for the same publisher. In 2009, Alan edited for publication by Haynes the diary of a Royal Field Artillery signaller who served on the Western Front, titled Plough and Scatter: the Diary-journal of a First World War Gunner. He is currently working on a book about First World War campaign in Mesopotamia. Alan currently holds the position of Chairman of the Salonika Campaign Society and is a member of the British Commission for Military History. He writes and lectures on various aspects of military history, with particular emphasis on the First World War and over the past decade has led many tour groups to the battlefields of the Salonika Campaign.