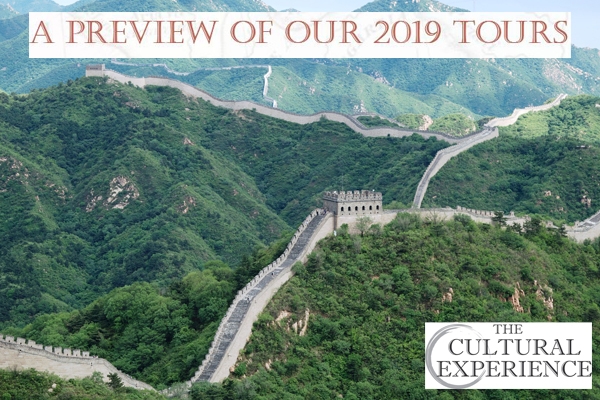 We have been working hard to come up with some brilliant tours that we are looking to run throughout 2019. You can register your interest in these tours by filling in the form at the bottom of this page.

By registering your interest in a tour you will be given an exclusive booking window to be able to book a tour before it goes on general sale so please do let us know if a tour interests you.

An exploration of impressive treasures and awe-inspiring archaeological remains of one of the world’s greatest civilisations. A story told through towering temples, vast pyramids, and everyday objects.

The long series of wars between Punic Carthage and Republican Rome is just one aspect of this extraordinary tour to some of Tunisia’s most famous archaeological sites. Discover the art and architecture that the Carthaginians, Romans and later cultures left behind.

The vast Roman colony of Timgad, often referred to as the “Pompeii of Africa”, is just one of the UNESCO World Heritage sites that we will visit on this tour. Other fascinating sites and museums on this tour feature artefacts and architecture from the Phoenician, Roman and Byzantine periods.

The Chinese Military Museum in Beijing, the Great Wall, and the impressive Terracotta Army are among the sites that tell the story of Qin Shi Huang, the first emperor of a unified China.

The Etruscans and the Rise of Rome

Discover the true founders of ancient Rome – the Etruscans. We explore spectacular rock cut tombs with their beautiful paintings, as well as exquisitely crafted gold jewellery and the remains of their temples and domestic architecture in Tuscany and Rome.

Ravenna, City of Mosaics. Glittering mosaics characterise Ravenna’s many churches and highlight the transition from the end of the Roman Empire to early Christianity

Amidst a plethora of archaeological sites we unearth gems such as the best preserved Roman city in Europe, Neolithic gold and beautifully painted Thracian tombs.

The Incas and Pre-Columbian Peru

Culminating at the iconic site of Machu Picchu we explore the Sacred Valley and its environs, the dramatic adobe city of Chan Chan, Trujillo and Lima.

Alexander the Great in Turkey

A mixture of military history and archaeology as we follow in Alexander’s footsteps along the Aegean coast: Granicus, Troy, Assos, Sardis, Ephesus, Priene and Miletus.

The Lost Legions. With fascinating sites and state-of-the-art museums - follow the Roman campaigns in the Low Countries and Germany, culminating in the disaster in the Teutoberg forest, and the destruction of Augustus' three legions.

The Land of the Assassins – mountainous north-western Iran. Visit the less trodden paths of north-western Iran and Iranian Azerbaijan, seeking out the high medieval forts of the ‘assassins’, Sasanian fire-temples and ancient cities of this lush and varied region.

The Greek and Persian Wars

Based on mainland Greece we look at the struggle between these two competing ancient cultures through visits to battlefields, archaeological remains and museums.

The Vikings in Denmark.

From where the invasions of Western Europe began we visit tombs, grave ships, long ships, forts and settlements, whilst we will marvel at many preserved treasures and artefacts.

Alfred the Great – The Pale Horseman

A tour through historic Wessex that follows Alfred’s struggle to unite England against the Viking hordes – Winchester, Ashdown, Athelney, Ethandun and more.

Explore the major battles of the war such as Poitiers, Crecy, Agincourt and Patay whilst staying in some of France’s most historic, medieval towns.
April 2019 with military and medieval historians Maj Gordon & Maj Imogen Corrigan

Wars of the Roses in the North

The sequel to this year’s popular tour in which we travel up country to visit battlefields such as Blore Heath, Towton and Hedgeley Moor.

English Civil War in the North

The Duke’s finest victories in both Bavaria and Flanders, including Blenheim, Lille, Ramillies and Oudenarde.

Frederick the Great in Germany

The last in our trilogy. The battles in Prussia and in Saxony including Rossbach, Zorndorf, Hochkirch, Torgau and Koenigstein.

‘Last of the Mohicans’, Wolfe of Quebec and the expulsion of the French from North America. From the colonial frontier to Louisbourg at the mouth of the St Lawrence.

May 2019 with historian Tim Clayton

A tour along the east coast of Spain to reveal the crucial role of the Royal Navy and the influence of Suchet’s French army on Wellington’s strategy.

May 2019 with historian Col Nick Lipscombe

Wellington over the Pyrenees

Follow Wellington on his invasion of France through stunning mountain countryside and picturesque towns.

Napoleon in Germany. A rich mix of fortresses, museums, architecture and, of course, battlefields. Including, Jena/Auerstadt, Kulm and Leipzig.

Explore sites in Colombia, Ecuador and Peru forever associated with El Libertador and the struggle for South American independence.

A detailed look at the Prussian successes of 1866 through the revealing scenery and baroque architecture of the Czech Republic.

A journey through a time of great change and upheaval that led to the creation of modern Britain.

An exclusive trawl through, and interpretation of, the Imperial War Museum art archives followed by visits to pertinent Western Front locations.

Poets on the Western Front

A juxtaposition of the idealistic beauty of poetry and music against the backdrop of the horrific realities of war.

We look at the four major battles fought in Poland: Tannenberg, Masurian Lakes, Lemberg and the Brusilov Offensive.

Through exploration of forts, tunnels, underground gun positions, trenches and museums we tell the tale of this desperate battle of attrition.

The rise and destruction of the Nazis

A short tour in Bavaria in which we see and understand where and how such an inhumane regime came to power and was subsequently held to account.

The battles of the First Army in the Northwest, the Eighth Army in the South, El Djem and Kairouan.

Operation Husky: the Invasion of Sicily 1943

The first in our Italian Campaign trilogy in which we visit the landing sites of both the British and American forces and the subsequent battles.

The second of our trilogy of Italian campaign tours -the river crossings, the battles for Cassino and the Anzio landings.

The story of the failed airborne offensive is described from a soldier’s perspective as we travel along Hell’s Highway from Eindhoven to Arnhem.

The end in Italy 1945. The final of our trilogy of Italian campaign tours exploring the battlefields amidst the rugged terrain between Florence and San Marino, the pursuit and final battles in the Po valley.

We follow the battles from the Russians crossing the Oder, to the fight for the Seelow Heights and right in to the centre of the city itself.

Both a cultural and a historical tour of Vietnam from Ho Chi Minh to Hanoi including Cho Chi & Vinh Moc tunnels, Marble Mountains, Nui Tanh, May Lai and Hamburger Hill.

An exploration of the palaces and grand houses that played a pivotal role in the life of Russia’s Royal family ending at Ekaterinburg.

We visit the palaces, houses, towns and villages that influenced this enigmatic country’s great artists, writers, musicians and thinkers.

A tour of the major sites associated with the Norman dynasty in Southern England accompanied by illuminating key-note talks from leading historians of this period.

Remember to use the form below to let us know which tours you are interested in.