The Archaeology of the Bay of Naples - a review by TCE guide, Amanda Pavlick 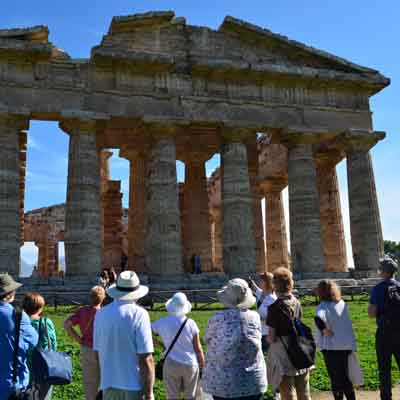 Earlier this year, popular TCE guide Amanda Pavlick, Professor of Classics at Xavier University, led a tour around the archaeological delights of the Bay of Naples. Her insight and knowledge on all things Roman helped bring to life the lost worlds of Pompeii and Herculaneum, as well as the beautiful villas of Stabia and the ruined and mythical Phlegraean Fields. Amanda recently took us through her favourite moments on the tour, from the groups’ reaction to Herculaneum to the jaw dropping, unforgettable memories of seeing new discoveries at Paestum and Pompeii. Here is what she had to say:

“Perhaps my favorite moment of the whole tour was in Herculaneum, where some guests were hoping to see the “sex bakery.” I really wasn’t sure what they meant for a while, and when we arrived at the building in question, they showed me the booklet we’d gotten at the gate - the bakery of Sex., meaning Sextus, a Roman first name. I mentioned this, and they were undaunted - “but what about the penises all around here?” To which I replied, quite seriously, “well yes, obviously; this is a bakery!” And everyone burst out laughing. Sometimes I forget that I am a Romanist and phallus images in bakeries aren’t things everyone else takes for granted (in theory, they helped the bread to rise…).

Our excellent tour manager, Shaun Smith got me and another guest, Scott McCracken into the downstairs, off-limits area of the museum at the Ruins of Paestum. He was approached by one of the museum directors who, after a lengthy conversation, took the three of us downstairs. He showed us a fully rebuilt chamber tomb from the 4th century BC, recently recovered from looters. It was one of the most stunning things I have ever seen - gorgeous, brilliantly executed paintings, and a tomb you could walk right into (a rarity; museums generally keep you away to avoid damaging the antiquities). My jaw absolutely dropped, to Shaun’s delight, and for the director to share this with Scott (an archaeologist) and myself was clearly a treat for him as well. It was an unforgettable moment.

The day where we visit Villa San Marco and Villa Arianna in Ancient Stabia, and Villa Oplontis in Torre Annuziata, is fun. To keep things interesting when we go to Oplontis, I set a mini scavenger hunt. So much of villa culture was and is about the beautiful frescoed wall decorations, and the artist who worked at Oplontis was potentially testing out designs later used in the Domus Aurea, the palace of the Emperor Nero, in Rome (Oplontis is possibly the villa of Nero’s second wife), so the frescoes there are particularly impressive. I mention a few scenes to look out for and those interested see if they can find them - primarily, I mention a glass bowl so perfectly executed you’d swear it couldn’t be two-dimensional, and a bowl of figs with the most transparent netting over it to prevent the landing of flies. This tends to be an enjoyable exercise; as we were readying to leave, I had three guests come up to me saying ‘oh no, I haven’t found the figs yet! Give me a hint where to go!’

Another lovely (but much more subdued) moment was being at the café at the furthest point on the crater of Vesuvius. The wind was whipping, and it was cold as anything, but a group of us stopped for hot cocoa and to take in the view. The vista, overlooking the Bay, Pompeii, and the modern areas around from the top of this mountain that threatens destruction but also preservation, together with a warm drink and wonderful company, was truly memorable.

By the time we were at Herculaneum on the fifth day, some of the guests were remarking on how I was training their eyes to be able to see like an archaeologist. We walked into an otherwise unassuming house near the entrance of the site; the house itself is largely still covered by eruption debris so you don’t see much before hitting a literal wall, with the modern town 15 feet above your head. I was able to show the guests with me how I was able to understand the use of the room we were in based on its location in the house, the columns preserved therein, and the decoration of that area based on the layers of wall covering and carbonized wooden beams still preserved. They learned where to look to find traces of upper storeys, toilets, furniture, construction styles, plaster casts of organic material (wooden doors, plant roots, people), and, in general, how to ‘read’ archaeological material.

My MA research had been on snakes on domestic shrines in Pompeii, and very few of these remain visible in the city, though some are if you know to look for them. The guests kept commenting on snakes and shrines whenever they saw them. As domestic religious worship was a crucial element of being an ancient Roman, they began to see and understand an aspect of antiquity that perhaps had not previously occurred to them. Karen Barrett told me that she had never given any thought to who was in the area before the Romans, and so learning about the indigenous people, the Greek colonists, and the history of Pompeii and other sites before the Romans took over was eye-opening.

The guests loved when I was thrilled to see something that had often previously been locked away or which I had never seen before; a small exhibition of wall paintings from a suburb of Pompeii had me gobsmacked, much to many people’s enjoyment.

Our coach driver, Franco, was absolutely spectacular. He was unflappable, even in some quite literally tight situations with a large coach, and being a local to Naples, had some amazing tips for us. His stalwart nature in the often chaotic Italian traffic was a frequent source of amusement for the group. I cannot say enough about Franco; the tour would have been much poorer for his absence.

Our hotel in the hills of Stabia, La Medusa, was absolutely lovely. The property is stunning, the rooms comfortable and the view of Vesuvius is spectacular. Having that view, in particular, for the welcome lecture on the second night was so deeply illustrative of the reason that we were all on the tour. I could never have provided a PowerPoint slide more evocative than that view. My room was beautiful, and every other public room I went into was beautiful and immaculately maintained. The staff I encountered were helpful and pleasant. The bar was excellent, and we availed ourselves of it more and more as the tour went on.”

Amanda will be returning to the Bay of Naples with The Cultural Experience in 2019. You can find more information about our tour to Pompeii and Herculaneum, along with our 2019 departure dates, on our website. You can also see other reviews and photos from the tour here.