New discoveries at the largest cathedral in the Ancient World 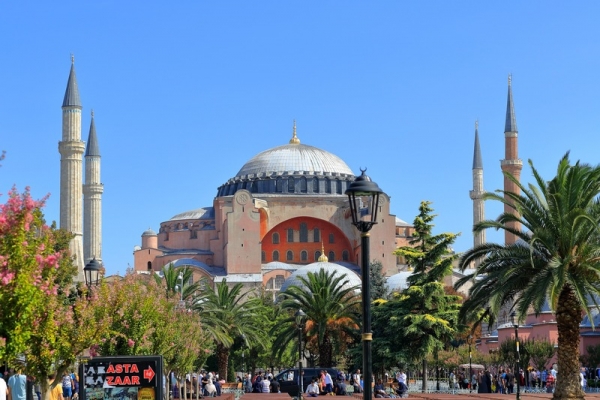 Previously undiscovered buildings have been uncovered at the Hagia Sophia in Istanbul, revealing new information about its construction and changing our understanding of the ancient building.

The project, led by Ken Dark and Jan Kostenec, has discovered what is believed to be the long-lost Great Baptistery, which would have been used over 1400 years ago to baptise the children of Byzantine Emperors. It has also identified the marked spot where the most famous Byzantine Emperor, Justinian I, once stood during ceremonies.

The original Hagia Sophia church was burned down during riots in 532. Upon learning of the destruction, Justinian I (reign 527 - 565) ordered the construction of a massive cathedral with the same name. Completed in 537, the complex was the biggest Christian cathedral in the ancient world. After the capture of Constantinople by the Ottomans, the Hagia Sophia was converted to a mosque, and remained in use until 1935 when it became a museum.

One of the most exciting discoveries was made while restoring the original Byzantine floor of the Northeast Vestibule. The archaeological team uncovered a circular shaped spot made of an igneous rock, a different rock type to the rest of the floor. The age and distinctness of the spot has led Dark and Kostenec to believe that it is where Emperor Justinian I was intended to stand during ceremonies and liturgies. When discussing their findings, they said that “…it is probably the only place where it is possible to identify anywhere the precise spot on which the most famous Byzantine emperor stood”.

As well as the baptistery, the presence of what could be a previously unknown ancient library was discovered under the Large Hall. Given the size of the structure, it could have held thousands of scrolls during that cathedral’s hey-day.

This followed the discovery that the structure known as the ‘Northwest Vestibule’ was much older than previously thought. After archaeological analysis of the building, it was concluded that the structure was part of the 6th century Justinian cathedral rather than an addition built by the Ottomans.

“Recognizing that the northwest vestibule was part of the Justinian church means that all previous plans of the Hagia Sophia are incomplete and their use should cease for scholarly purposes” Dark and Kostenec stated, adding that “this discovery of such a large ‘new’ part of Justinian’s church is unprecedented in recent decades…and alters significantly the known plan of that world-famous building.”

The project also looked at the exterior of the Hagia Sophia. Excavations unearthed the remains of many white marble slabs. The number of slabs found suggests that the exterior of the cathedral may have been covered in more marble than previously estimated. This means that the building would have had a strikingly different outside appearance to the red brick and painted surfaces that have decorated the Hagia Sophia in recent centuries. The marble slabs would have “reflected light both onto the building from its surroundings and off its white walls, enhancing visibility from a distance and in brilliant sunlight, creating an almost luminous quality.”

During the project, museum officials conducted substantial restoration work. More recent wall and floor plaster was removed, revealing the ancient and medieval original structures beneath. This revealed previously unknown mosaics, frescoes, sculptures, tiles and graffiti. Among these was a colourful gold and green mosaic in the ground level church interior that displays geometric swastika patterns, which appear frequently in art from the ancient world. Another was a fresco found on the northeast ramp which shows a large cross in a circle surrounded by a red, green and gold geometric pattern. The graffiti consisted mainly of masons’ marks on broken slabs or hidden under tiles on the walls. These marks are being documented by researchers to help build a clearer picture of the people who built the cathedral.

There are still many more discoveries to be made at this fantastic building. Several parts of the complex remain undiscovered, some of which will likely be able to shed more light on life during the Byzantine Empire. Dark and Kostenec believe that “the scale of the construction project is such that few, if any, comparisons in the world of late antiquity are possible.”

The findings of the project are being published in ‘Hagia Sophia in Context’, which is to be released later this month.