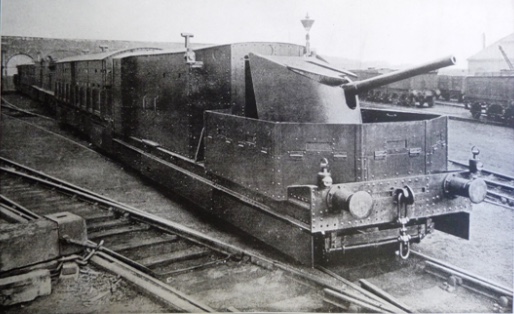 The last surviving armoured train used to transport supplies to the trenches on the Western Front during the First World War has been rescued from the scrapheap and restored.

Built in 1917, the 8ft high Simplex 40HP LR2182 travelled thousands of miles on the light railways laid to transport munition, supplies and men to and from the front lines. Resembling a tank, the century old locomotive had full armour plating to protect it from enemy fire and was fitted with a petrol engine to make it more discrete than her steam engine contemporaries.

The historically significant train was found in the back of a scrapyard in Cumbria by an enthusiast in 1971. The engine had fallen into disrepair and it had lost its number plates, works plates, carburettor, brake handwheel and brass Dorman engine works plate. LR2182 was displayed in several museums before being donated to the army in 2001. It was loaned to the Leighton Buzzard Railway in 2005, where the £20,000 restoration project began.

The project was a serious undertaking which took 10 years to complete. The main reason for this was that Greensand Railway Museum Trust, who run Leighton Buzzard Railway, insisted on restoring the original, and now unique, Dorman petrol engine, which had not been fired up for over 50 years.

Restoring the engine required replacing two of the four pistons which had broken apart on removal from the cylinder bores, the removal of the corroded steel framework, overhauling the gearbox, repairing the radiator, fitting a new fuel tank and constructing a new, distinctive, Cupola style steel roof.

The train only has room for one driver, who would have sat precariously on top of the engine, with the petrol tank on one side and a radiator on the other. It would have been swelteringly hot, filled with fumes and could ignite at any moment. The driver had to rely on small vision slits to see where they were going and while the armour plating would have withstood bullets and shrapnel, it would not have survived a shell exploding nearby.

Introduced during the later stages of the First World War, only 34 of these armoured trains were ever made. They were designed to take men and supplies the last 10 miles to The Front, where it was too dangerous, too difficult or too slow for horses and vehicles to make the journey.

After the war, the locomotives were used in heavy industry where they were run into the ground then left to rust away. LR2182 was put to use by Furness Brick & Tile Co Ltd of Askam Brickworks, Cumbria, who are still in operation today. The engine was used until 1963 when it was sent to languish in a scrapyard in Barrow.

“If an enthusiast had not stepped in and saved this one, it would have been scrapped like the others” said Cliff Thomas, chairman of the Greensand Railway Museum Trust. “I think it is a tremendous achievement for such a small historical trust to revive such an important historical treasure from the First World War.”

LR2182 will be based at Leighton Buzzard Railway and will be used for special demonstrations. It will also be loaned out to other museums in the future.