Ancient horse, saddled and ready to run, uncovered at Villa of Mysteries! 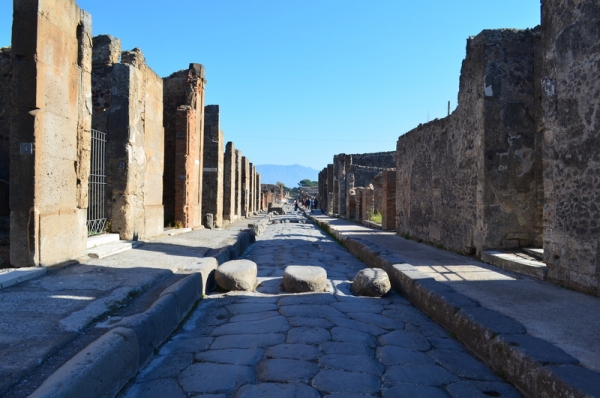 The remains of a third horse have been discovered during the excavations of a stable at Civita Giuliana, just outside of Pompeii. The horse was found with the remains of an ornate and expensive Roman parade harness, suggesting that is was being prepared to rescue those fleeing from the volcano.

The eruption of Mount Vesuvius in 79AD resulted in the deaths of thousands when the city of Pompeii and the surrounding towns and villas were submerged in boiling ash.

Excavation of the villa has been underway since March 2018, the initial phases of which discovered the stable, a wooden trough, the outline and skeleton of one horse and the legs of a second. The first horse was found laying on its right side, skull resting on its left foreleg. It is believed that the horse was tied to the trough and, like the famous Pompeii dog, was struggling to break free when the ash cloud reached the villa. The horse has since been taken away for analysis and cast in plaster.

The full excavation of the stable, started in July 2018, has revealed a third horse, surrounded by the remains of a decorative harness. Four half-moon shaped, conifer-wood finds, reworked and coated in bronze lamina were found on the ribs of the horse. Another object, made of hooks with rivets that were connected by a ring to a bronze disk, was found underneath the horses’ middle. Small traces of plant fibres were found behind the horses’ back, suggesting that the horse was wearing a cloth or mantle.

The finds suggest that the horse was wearing a ‘four horned saddle’. It was designed to give the rider more stability before the invention of stirrups and is known to have been used throughout the Roman Empire since the 1st Century AD. Records show that it was used primarily in military parades.

Analysis of the horses supports this. Massimo Osanna, Director General of Pompeii, said that the horses “must have belonged to the noblest breed of display animals, as indicated by their imposing size - likely the result of selective breeding - and the quality of their iron and bronze harnesses”.

This, along with other finds from the villa, suggest that it once belonged to a high-ranking Roman military official. According to Osanna, the villa must have been a “prestigious estate”. It had several colourful and elaborate frescoes, evidence of well-furnished rooms, extensive servants’ quarters and long terraces with views across the Bay of Naples towards Capri. The villa was also a working farmyard, with oil and wine warehouses discovered and evidence of cultivated lands surrounding the building.

However, there is evidence of damage and looting throughout the villa, including the recently excavated stable. Access tunnels and cement-filled cavities in the tunnel and villa walls have made it difficult to preserve some of the finds and has made it impossible to make a plaster cast of one of the horses. It is believed that parts of the parade harness were also stolen. The location of Civita Giuliana has been known since the early 1900s, rediscovered by landowner Maquis Onofrio Inperiali, but only two excavations have taken place prior to 2018. Both were brief and resulted in the villa being covered again. This made it ripe for grave robbers.

The current excavations were undertaken as a response to the prevalent grave robbing, in order to protect the archaeological area and what artefacts remained. It is part of the wider Operation Artemis, led by the Italian police to investigate and recover stolen artefacts - so far over 140 suspects have been questioned, including members of the Italian mafia, and nearly 2000 ancient artefacts have been recovered.

The project at Civita Giuliana will continue until the villa has been fully excavated. Osanna said that later in the year, 2 million euros will be allocated to the project for the “expropriation of land and continuation of excavations, with a view to an eventual opening to the public.”

You can find out more about Pompeii and its surrounding areas through our tour diaries, written about our latest visit to the Bay of Naples.