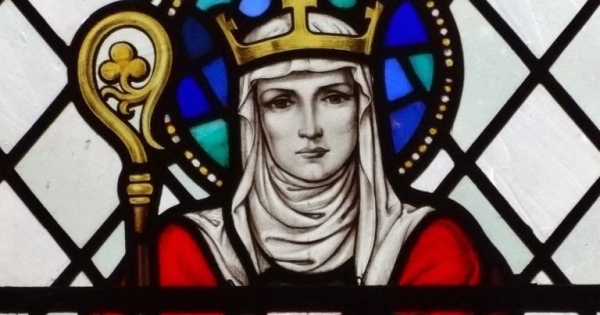 Archaeologists are currently conducting scientific tests on remains which have been treasured for centuries and kept in a church in Kent.

Initial data from these tests suggests that the bones are from one of the earliest English saints, Eanswythe, the patron saint of Folkestone.

Eanswythe was the Anglo-Saxon princess of the Kentish royal family, and she is said to have founded one of the earliest monastic communities in her lifetime, before passing away in her late teens or very early 20s.

As her father Eadbald died in late 640 AD, she must have been born before 641 AD and is believed to have died before 663. Radiocarbon dating results suggest that the bones date from between 649 and 673 AD.

If further testing confirms these results, then the bones will be the earliest remains of an English saint which have been identified, and the only identified remains of a member of the Kentish royal family.

Eanswythe's grandfather Ethelbert became the first English king who converted to Christianity; his tomb and others which contained the rest of the royal family were destroyed with Augustine's church in Canterbury.

The bones were tested after the diocese of Canterbury gave special permission. The bones had been examined by archaeologists in the 1980s but were not tested.

Almost all of the archaeologists working on the remains come from Folkestone and grew up hearing about the story of Eanswythe.

The remains had been missing for centuries until workmen found them hidden inside a wall near the altar in 1885. Archaeologists believe that they were hidden here to save them from the iconoclasm of the Reformation, which destroyed many of the oldest monuments.

Find out more about Anglo-Saxon England and how Anglo-Saxon kingship worked during this crucial period in English history on our Pale Horseman tour in June 2021.