Could a study in the Wadi Rum save the Middle Easts conflict damaged heritage? 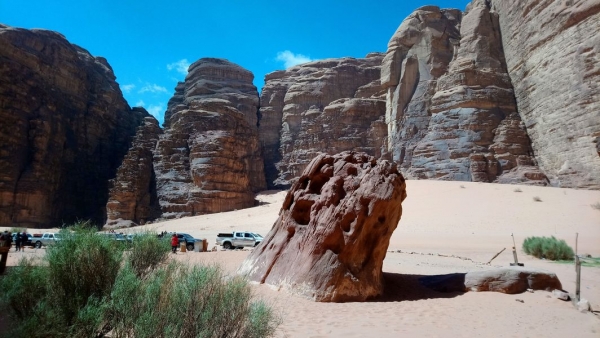 Jordan’s Wadi Rum has suffered from decades of conflict and vandalism which is causing the destruction of its mysterious 3000-year-old petroglyphs. However, a preliminary study into the impact of ballistic damage to rock art and, more broadly, the impact of conflict on heritage, has revealed three risk factors that can help predict the severity of rock deterioration and inform damage mitigation measures.

The research study, which started in September 2018, ultimately aims to “uncover the physical, as well as the social, impact of gunfire on stone heritage” according to Lisa Mol, a geomorphologist from the University of the West of England and leader of the project. Studying the science behind rock deterioration that is affected by bullet damage will help to provide an understanding of the damage caused by conflict and the long-term consequences of arms use on built heritage.

“It is essential that the initiatives to stabilize and either conserve or restore damaged heritage are grounded within a detailed understanding of the mechanisms and extent of stone damage.”

This is particularly pertinent now as many Middle Eastern heritage sites are affected by ongoing conflict. This study could ensure that there are suitable restoration programmes in place for when there is safe site access for conservation work to start.

One factor is the consolidation of the rock surface prior to impact. The more deteriorated the rock is by natural weathering, such as the freeze-thaw effect, the further the bullet can penetrate the surface.

Another is the angle of the bullet’s impact. A bullet hitting the rock at an angle causes the impact to resonate diagonally through the surface. This causes damage across a larger surface area than if the bullet hit the rock straight on. This is an important factor in determining the surface removal of patterns on the rock, and any subsurface damage.

Finally, the field team found an increasing extent of ballistic impact zones over time, which correlates with an increase in gun firepower. Modern weapons such as AK-47s are considerably more powerful than the rifles used during the Arab Revolt. This is perhaps the most significant risk factor as, according to Mol, “powerful modern weaponry appears capable not only of penetrating farther into a given surface, but also of pulverizing the material surrounding the impact.” The larger impact zone makes the rock more susceptible to natural weathering, resulting in a faster deterioration. In many cases, this degradation can be as damaging as the initial bullet.

The Wadi Rum was the perfect location to carry out this research. The ballistic damage inflicted to its ancient petroglyphs, and its World Heritage Site status, meant that it had the right rock deterioration conditions and that it can be used to trial conservation techniques developed as a result of the study. This will prove to be a challenge as the damage caused by gunfire during the 20th and 21st Centuries is extensive.

During the Arab Revolt of 1916 - 1918, the Wadi Rum was used as a base of operations for the Bedouin guerrilla forces, aided by T.E. Lawrence, a young liaison officer better known as Lawrence of Arabia. As such, it is home to many attractions such as Lawrence Springs and Lawrence House. It was in the Wadi Rum where Lawrence, jointly with Auda Abu Tayi, planned and launched the bloody Battle of Aqaba, which turned the tide of the revolt against Ottoman forces in Jordan.

More recently, the otherworldly rock formations and the ancient engravings upon them have been subjected to target practice by the local Bedouin population. Along with depictions of human activity and animals such as ibex, cheetah and hyenas, all of which are now extinct in the area, there are traces of Thamudic and Nabataean inscriptions, as well as Arabic script that pre-dates the Koran. Despite the banning of firearms when the Wadi Rum was awarded UNESCO World Heritage Site status in 2011, the resultant damage is widespread.

These are only the first steps towards understanding the impact of conflict on rock deterioration. The study will now move on to quantifying the damage of ballistic impact on rock, which will help to determine a scientific response to restoring damaged heritage and conserving what is left.