Fortress Malta Tour - from The Knights of St John to WW2 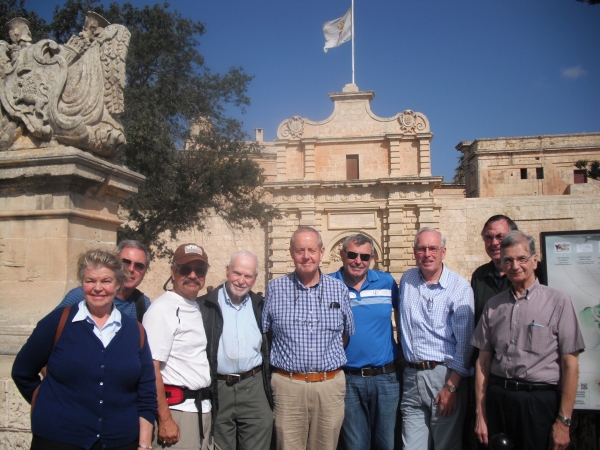 Group photo outside the town walls of historic Mdina, ancient capital of Malta

Following customer feedback from earlier tours, this year we expanded the former Second World War itinerary to include the Great Siege of 1565 and the British colonial period in between. Thus Malta is now a full week’s itinerary and as Malta has what is probably the greatest and most impressive concentration of military fortifications anywhere in the world – covering everything from Roman times to NATO – there is plenty to see. Add to that the warm Mediterranean climate, friendly English-speaking population, not to mention the beautiful architecture and relaxed ‘café culture’ of our Valletta base – and we now have what we believe is the perfectly balanced military history themed cultural holiday.

We started our week at the recently restored Fort St Elmo (key to the 1565 Siege) with its excellent new Heritage Centre and enjoyed gentle strolls through elegant Valletta, stopping off at the Grand Master’s Palace with its famous armoury and then the equally famous ‘Café Cortina’ for tea. A coastal drive took us to several picturesque bays (each with their own medieval lookout towers and stirring tales of pirate raids, defence or invasion) up to Marfa Ridge at the very northern tip of the island for sweeping views over the neighbouring islands of Gozo and Comino. An enjoyable central Malta drive covered the Victorian defences by visiting the famous Victoria Lines atop a dramatic escarpment that runs across the breadth of the island and then on to the Fort Rinella for re-enactments of Victorian soldiering. Visits to the ancient towns of Mosta (to view the site of ‘Mosta Miracle’ from World War 2), and to perfectly preserved Mdina (with its nearby World War 2 hospital and airfield – complete with museum) followed. But perhaps the highlight of the week was the morning cruise of magnificent Grand Harbour and walking around its historic ‘Three Cities’ – the crucible of both the great sieges in Malta’s history.

Wherever we went we ate well and felt very welcome – Malta is like that. It was a week of great variety and interest – both historical and cultural and everyone had great fun. It is particularly pleasing to see how, with each returning visit, Malta is making more and more of an effort to show off its rich historical heritage – with an increasing range of superb historical sites, museums and exhibitions to visit. The island is now firmly focussed on Valletta’s forthcoming status as ‘European City of Culture’ in 2018 – and we intend to capitalize on this on future tours – watch this space!