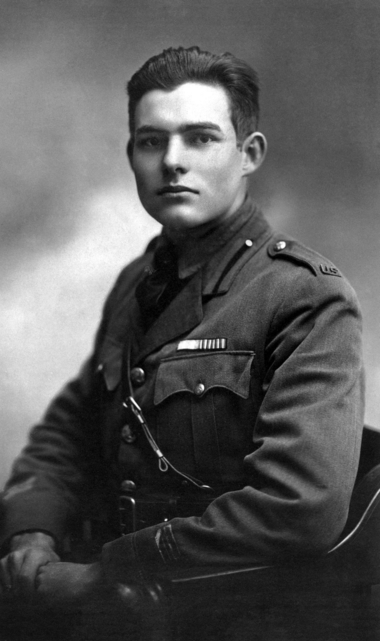 On July 8, 1918, a young American ambulance driver named Ernest Hemingway was distributing chocolate and cigarettes to the Italian soldiers in the trenches along the Piave River when the trench he was walking through was hit by an Austrian mortar shell. Hemingway was left unconscious, severely injured and buried by rubble, but alive because of the unknown Italian soldier standing in front of him. By taking the full brunt of the blast, the soldier inadvertently saved Hemingway’s life.

Hardly anything is known about the Italian soldier - until now. Research by author and historian James McGrath Morris and Italian historian Marino Perissinotto has identified the previously anonymous soldier that enabled Hemingway to become one of the 20th Century’s most beloved and influential American writers.

Hemingway described the explosion in a letter home: “Then there was a flash, as when a blast-furnace door is swung open, and a roar that started white and went red.”

He spent the next six months recovering in a hospital in Milan, where he was treated for the multiple shrapnel and machine gun wounds. The first he sustained from the mortar explosion; the latter he received when he carried a wounded soldier to the safety of the nearest aid station. He was awarded the Silver Medal of Valour from the Italian Government for his efforts, one of the first American’s to do so.

Hemingway’s experiences during the First World War formed the bedrock for some of his most famous works, especially ‘A Farewell to Arms’. His affair with nurse Agnes von Kurowsky is widely known as the inspiration for the epic affair between Frederic and Catherine, an American ambulance driver and an English nurse on the Italian front. His experiences are so seminal that there is a memorial where the mortar exploded that reads: “On this levee, Ernest Hemingway, American Red Cross volunteer, was wounded the night of July 8, 1918”.

The unknown Italian Soldier is not referred to or mentioned by Hemingway in any of the numerous writings of his experiences. Nor have any efforts been made to identify him in the decades of biographies and scholarly works on Hemingway’s life. By taking the worst of the blast, the soldier inadvertently saved Hemingway’s life. Without him, the world would never have received ground-breaking and era defining classics such as ‘The Sun Also Rises’ and ‘For Whom the Bell Tolls’, based on Hemingway’s experiences during the Spanish Civil War. One could argue that the emerging modernist writing style, where nothing of importance seems to be stated explicitly, merely alluded to, may have taken shape very differently, and that the way returning soldiers interpreted and reacted to their experiences could have been completely different altogether had Hemingway not been one of those leading the way.

At the end of his 2017 book, ‘The Ambulance Drivers - Hemingway, Dos Passos and a Friendship Made and Lost in War’, Morris lists the eighteen Italian soldiers who died on the night of the mortar attack and challenges the world to continue his research.

“To be nameless is to be forgotten” McGrath Morris wrote in The Washington Post, “Failing to name the combat dead or chisel their names into stone is like leaving a soldier behind”.

His call to arms was taken up by Italian historian Marino Perissinotto. Together, they narrowed the list down by identifying the units each soldier was a part of, eliminating those who were stationed elsewhere. They were left with just three names. Of these three, two were stationed two miles behind the front line, leaving only one possible name: Private Fedele Temperini of the 69th Reggimento Fanteria. The unknown Italian soldier had been found.

Perissinotto found further evidence that Temperini is the unknown soldier in a military report from an officer at a Red Cross aid station. It states that the station had treated the first American wounded on the battlefront, alongside an Italian soldier from the 69th Infantry who had died from ‘wounds sustained in combat’. He was the only soldier from the regiment killed that night.

Fedele Temperini was only 26 when he died. From the small town of Montalicino, Tuscany, he was one of many conscripted Italian soldiers who were sent to fight against the Austrians along the Piave River. Over the course of the First World War, there were more than 600,000 Italian casualties across the front.

Morris called Temperini’s story a “cold reminder of history’s cruelty. The lives of the less accomplished are often forgotten, even when they change history”.

Morris is lobbying for Temperini’s name to be added to the Hemingway memorial along the Piave River, and that his name be remembered in Hemingway’s biographies so that “he too will have the distinction he deserves”.

You can learn more about the Italian Front on our First World War tours, and the operations Hemingway reported on as a journalist on our Spanish Civil War and D-Day: Operation Overlord tours.