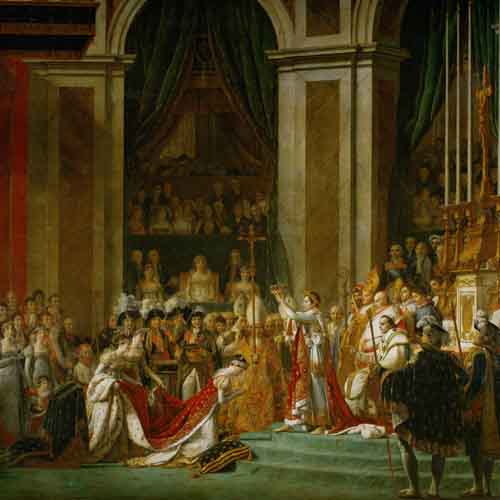 In the illustrious Notre Dame Cathedral in Paris, Napoleon crowned himself Emperor of France. Despite already having absolute power through his position of First Consul for Life, Napoleon chose to hold a lavish and elaborate ceremony as show of strength to cement the legitimacy of his regime and satisfy his allies and the powerful French elite. In doing this, Napoleon finally did away with the flimsy illusion of the French Republic and secured his position as the highest authority in the country, a king in all but name.

Napoleon was crowned in the presence of Pope Pius VII, his supporters, doubters and the public. After the consecration, the anointing of a monarch with holy oil, Napoleon took his crown from the Pope and placed it upon his own head. Napoleon then crowned his wife, Josephine, Empress of France.

By crowning himself, Napoleon symbolically showed that he would not be controlled by Rome or submit to any power other than himself. This was very important, both as a show of strength to reassure his allies and to quell any potential uprisings or anarchy by proclaiming himself the highest authority in France. This only worked because of the Pope’s presence. Despite the revolution, France was still a deeply religious country, and the traditional twin powers of authority, the monarchy and the Catholic Church, were strong in the French psyche and society. Becoming Emperor took control of the pillar of monarchy, and by crowning himself, Napoleon reduced the authority of the pillar of the Church. The Pope’s presence at the ceremony gave the coronation a sense of religious approval for the public. This enhanced Napoleon’s intended impression, that he was the highest authority in France, and therefore more powerful than the Church.

Pope Pius VII wasn’t there simply to be snubbed. He also played a key role in anointing Napoleon. An act usually reserved for coronating kings, the anointing with holy oil is the most important part of the French coronation ceremony. By including this stage of the ceremony, Napoleon sought to satisfy and gain the support of the powerful Royalist French elite, which he had lost completely after executing the Bourbon Prince, Louis Antonine de Bourbon, Duke of Enghien, in March that year. It showed a willingness to maintain tradition, and helped to re-establish the French aristocracy, with Napoleon in charge. This was reflected in his later actions of reintroducing the French Court, and in 1808 by granting titles and land to those that served him well throughout his campaigns.

The ceremony was also important for establishing the legitimacy of Napoleon’s hereditary rule. As First Consul for Life, Napoleon was granted the power to choose his own successor. Despite being proclaimed by Napoleon’s handpicked senate in May earlier that year, a national plebiscite was held on the 6th November. The doctored result was 99.93% in favour, but in reality, half of the potential voters abstained.

Holding the plebiscite gave the proclamation more validity, but the power itself was intended to ensure peace in France. It was designed to remove discord as there would always be someone in an assured, permanent position of power, with no reason for conflict or doubt to arise over who should rule after Napoleon had gone. This reassured Napoleon’s supporters that the gains they had acquired in the revolution were secure and dissuaded his dissenters from assassination attempts or a Bourbon restoration.

For all of the benefits that it gave Napoleon, power, legitimacy and domestic peace, the ceremony itself was not without its problems. Pope Pius VII was initially reluctant to attend, despite the key part Napoleon needed him to play. Some sources say that Napoleon had to pay the Pope to attend, and that the Pope only came because he wanted to get concessions from Napoleon towards Rome. This may well have been true as the political manoeuvre of crowning himself was planned and discussed at great length before the ceremony.

Napoleon had several familial issues in the lead up to his coronation. His sisters did not want to carry Empress Josephine’s train as she entered the cathedral, and he had to resort to threatening to take away their titles if they did not comply. Even then, there are rumours that at one point they tugged on her heavy train, causing her to stop walking up the aisle. Napoleon’s mother was absent from the ceremony, instead choosing to spend time with Napoleon’s brother, whom he had exiled to Italy for marrying without his permission.

The day itself started in chaos. People had arrived at the Notre Dame at first light to get a good seat, but there was no one to control the growing crowds. This delayed the set up and final preparation for the ceremony. It was only after an hour and a half that order was re-established, the master of ceremonies having to ask the military guards present at the cathedral for help. The weather was cold and snowy which, along with the large retinue and heavily crowded streets, made Napoleon late to the cathedral by over two hours. However, it is said that as his coach pulled up to the Notre Dame, the clouds parted, and the sun shone through for the first time that day.

By crowning himself andtaking the title of Emperor of France, Napoleon established the legitimacy of his position and hereditary rule. He secured the faith of his supporters, the compliance of his Royalist dissenters and did away with the last vestiges of the revolution to become the highest authority in France. Napoleon went from strength to strength. A year later, almost to the day, he won his most triumphant victory at Austerlitz and had initial successes in the Peninsula War. However, his popularity and power declined with his disastrous campaign in Russia, the loss of Spain and his abdication in April 1814. You can see some of the spectacular images from our tour to Austerlitz last week on our website, including the fabulous battle re-enactment, as well as our upcoming Napoleonic tours.

Title image is a scene taken from Jacques-Louis David’s Consecration of the Emperor Napoleon I and Coronation of the Empress Josephine in the Cathedral of Notre-Dame de Paris on 2 December 1804 (1808).