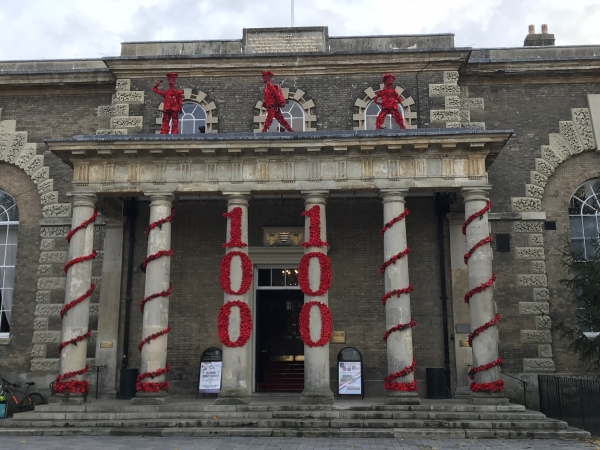 This weekend, as well as remembering heroes from all over the world, The Cultural Experience have also been looking in to the stories of local soldiers who lost their lives during the Great War.

Below are the names of the soldiers who are commemorated on the Lynchgate War memorial at St Johns Church, Lower Bemerton, Wiltshire, UK

Named after his father but known as Garry, he was killed in May 1918 leading his troops in the Battle of Aisne in France and is buried in Ville-Aux-Bois British Cemetery near Reims

Rifleman Benjamin Bucknall of Bemerton, age 20, was killed in action on 28 August 1918 in an attack on the Hindenburg Line. He is buried in Queant Road Cemetery, France.

Tom Cake of Bemerton, aged 19, was killed on 21 March 1918, the first day of a major German offensive in the Somme region. His body was never found and heis commemorated on the Pozieres Memorial along with 14,000 others from the UK and 300 from South Africa who lost their lives there between 21 March and 7 August 1918.

William Cake was killed on 24 August 1914 and is commemorated at Hautrage Military Cemetery Belgium.

Private Arthur Cannings of Wimborne St Giles and Fuggleston died of wounds on 21 April 1916 in modern day Iraq as the 5th Battalion tried to relieve the siege of Kut. He was 19.

Arthur Case, 22, died of tuberculosis at home in Quidhampton on 8 October 1917, ten months after being discharged from the army. After several appeals it was decided that his war service aggravated the disease but St John’s Church is the only place where his part in the war is comm0emorated.

Herbert Castle served in the naval reserves and was called up when war was declared. In May 1916 he was discharged with TB and died in Bemerton on 1 March 1917, aged 37.

Private John Thomas Cook, a married man with three children, was killed in action on 11 August 1917 during the Battle of Passchendaele. His name is one of more than 50,000 on the Menin Gate at Ypres with no known grave

Private Sidney Cousins, of Quidhampton, was killed on 26 September 1916 at the battle of the Somme. He was 34.

Stephen Crockett was the first man from Quidhampton to be killed in the First World War, and the first to have been born in the parish. He died, age 26, on 27 October 1914 in Flanders.

Richard Crockett died of wounds at the base hospital at Boulogne, on 22 May 1915, age 24 and was buried in the Commonwealth section of Boulogne Eastern Cemetery, the first of our servicemen on active service to have a named grave. Richard was the younger brother of Stephen Crockett, killed in October 1914.

Corporal William Curtis was killed in action in Belgium on 11 June 1917, aged thirty. He is buried in Wulverghem- Lindenhoek Road Military cemetery near Ypres.

William Elkins was killed at the battle of Cambrai in Northern France on 2 December 1917. He was 28. His body was not found or identified and he is commemorated on the Cambrai Memorial, one of more than 7000 men who died in that battle and who have no known grave.

John Foster served as a private in the Royal Marine Light Infantry for 21 years, then joined the reserves. In August 1914 he was drafted to the transport staff at Le Havre, France where he died from disease on 3 August 1917 and was buried in Etaples Military cemetery.

Joseph Fricker, of Wilton Road, aged 23, lost his life in the North Sea when HMS Cressy was torpedoed on 22 September 1914.

In 1917 Charlie Gasper, aged 26, was called up from the territorial reserves to join his battalion near Gaza. He was killed soon after he got there, officially on 7 November: but the actual date is not known. He is buried in the Gaza War Cemetery.

George Gilbert, from Bemerton, and a private in the Royal Marine Light Infantry, died aged 43 of pneumonia in Haslar hospital on 21 October 1918.

Private William Hayter, aged 23, was killed on 9th April 1917 on the first day of the attack on the Hindenburg line. He was buried in Bucquoy Road Cemetery near Ficheux but later rearrangements, including bringing in burials from surrounding battlefields, meant not all the graves could be identified. William Hayter’s name is one of 23 on a special memorial for those known to be buried in an unidentified grave.

Lance Corporal Hearn of Bemerton died aged 20 of illness in Arquata, Piedmont Northern Italy on 28th October 1918 and is buried in a military extension to the communal cemetery there.

Private Reginald Hibberd of Burcombe, age 21, was killed in action in Mesopotamia on 25 January 1917,

Private Robert Huggins of Quidhampton, aged 19, died in a prisoner of war hospital in Hamburg, Germany on 3 September 1917 after taking part in the battle of Passchendaele.

Private Walter Inkpen of the Army Service Corps, aged thirty, died of wounds in France on 27 July 1917 and was buried in the Menin Road South Military Cemetery.

Alfred Knight of Bemerton age 20, was killed on 17 November 1914 at Hooge, Belgium near Ypres.

RSM William Leach died of typhus in a Turkish prisoner of war camp on 2 May 1918. He is buried in the North Gate War Cemetery, Baghdad, headquarters of the Turkish army during the war.

Private Charles Payne of Quidhampton died of wounds, aged 21, on 22 November 1915 in Mesopotamia.

Private Frank Penny, whose family lived in Fugglestone, was killed in action on 25 October 1918 in Flanders, aged 19. He is buried in Heestert Military Cemetery in Belgium.

Private Walter Smart of Gillingham, his parents in Bemerton, was killed in action in Mesopotamia on 2 September 1916 as part of the ongoing Battle of the Somme. He was 21

Private William Stokes of Quidhampton, aged nineteen, was killed on 20 September 1917 during the battle of Menin Road Ridge, during the third battle of Ypres. His body was not found and his name is one of nearly 35,000 on Tyne Cot Memorial, which commemorates those men missing in Flanders after 16 August 1917.

Private Harold Stone, aged 22 was killed on 25th April 1917 fighting in Greece, close to the Macedonian border. His body was never found and he is commemorated on the memorial in Doiran military cemetery.

Private Albert Vincent, aged 30 was killed at the Battle of Passchendaele on 11th October 1917. He has no known grave but is commemorated on the Tyne Cot Memorial.

Able Seaman Arthur Whatley from Amesbury died when the battle cruiser Indefatigable sank during the Battle Jutland on 31 May 1916. He was 21 years old.

Signalman Frederick Whitchurch, aged 24, was killed in action on 11 February 1918 when HMS Cullist was sunk by a U-boat in the Irish Sea. He is commemorated on the Portsmouth naval memorial.