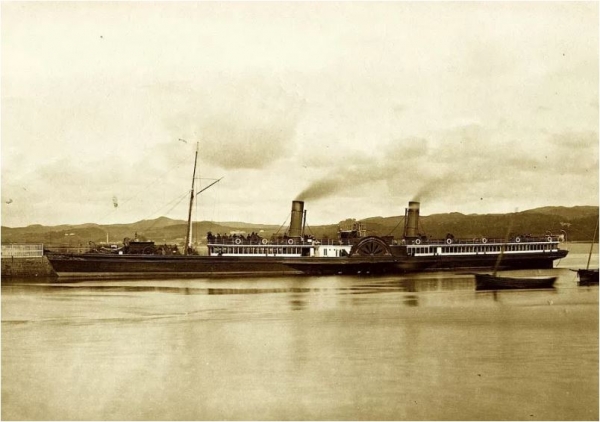 Launched in 1863, The SS Iona II had not even been in service for a year, but already this state of the art twin paddle steamer built to ferry Scots across the River Clyde had been snapped up for trans-Atlantic clandestine operations by Charles Hopkins Boster of Richmond, VA. On the night 19th January 1864, fully laden with coal and her mysterious cargo, she set sail to travel the short journey across the Irish Sea to Queenstown (Cobh) near Cork, where some say she refuelled again. Others suspect extra cargo may have been taken on-board. Whether because of this new cargo or the thought of crossing the Atlantic, her crew mutinied, putting back her departure by some days.

Confident that her recently reinforced hull would cope with the rough seas ahead, she finally departed for North America but as she lost sight of land she encountered pounding seas, began to take on water and decided to run for Milford Haven. The night was dark, visibility poor and the Iona II missed its safe harbour. As she took on more water, so she sank lower but managed to reach the lee of Lundy Island in the Bristol Channel by which time her boiler fires had been extinguished and consequently she lost power, her pumps became disabled and she drifted aimlessly to founder in 20 metres of water off that island. Fortunately her crew were rescued and the site of the wreck noted. Within days an open diving bell was taking salvage divers to the sea bed to recover her mysterious cargo. The ship had been observed leaving Ireland by Federal agents: had they been instrumental in the ensuing mutiny, perhaps even going on-board to sabotage the venture? Regardless another Confederate blockade runner had come to its end. It was not until 1967 that the wreck was discovered and partially excavated.

Today the wreck is protected by Historic England but can be visited by licensed leisure divers – indeed the Landmark Trust, owners of Lundy Island, have created a dive trail.

However, participation in our American Civil War Western Theater tour requires no need to dive in order to visit to the USS Cairo gun boat as it was raised from the Mississippi in 1965 and is now housed in its own museum. And neither do you need to dive to visit the HL Hunley Confederate submarine during our American Civil War Southern Heartland tour.

For much information about the SS Iona II see: