The Survivors of Vesuvius - what happened to them? 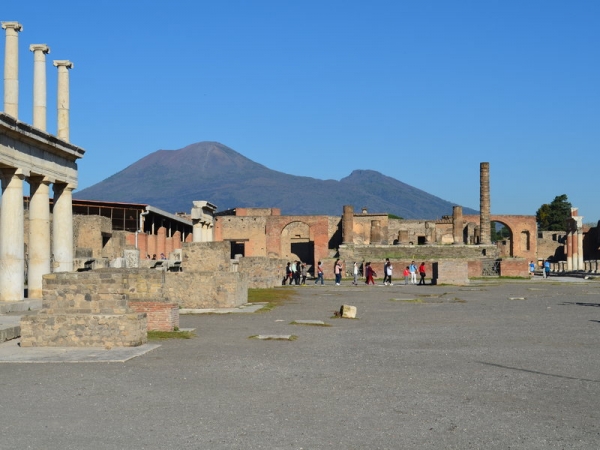 A new study has managed to trace some of the survivors of the eruption of Mount Vesuvius. Using evidence from inscriptions found throughout the Roman Empire, archaeologist and historian Steven Tuck has managed to build a picture of what happened to those who managed to escape a fiery end.

Mount Vesuvius erupted in 79AD, covering the nearby Roman cities of Pompeii and Herculaneum in ash. An estimated 2000 people died as a result, but with populations of 20,000 and 15,000 respectively, many more people escaped than died. So what happened to them?

Steven Tuck, Chair of Classics at the University of Miami, created a database of last names, taken from inscriptions found on tombstones and public buildings. He then compared them to the known names of people who lived in Pompeii and Herculaneum before the eruption, seeing where they appeared in settlements that weren’t affected by Vesuvius.

“I looked for names at Pompeii that were prominent in the later years of the city and inscriptions that were as near as possible post-80AD in the refuge communities.”

In creating his database, Tuck not only wanted to identify where the refugees went, but to also “draw conclusions about who survived the eruption, where they relocated, why they went to certain communities, and what this pattern tells us about how the ancient Roman world worked socially, economically, and politically.”

There are very few surviving personal stories written about the lives of those who both died and survived the natural disaster, making it harder for archaeologists to draw conclusions on what it must have been like. The most well-known surviving account is that of Pliny the Younger writing about the fatal journey of his uncle, Pliny the Elder.

Tuck was able to identify several survivors. One was Cornelius Fuscus, a Roman soldier whose tombstone was discovered in Roman Dacia (modern day Romania). The inscription on his tomb shows that he died in 87AD and that he lived in Pompeii and Neopolis before joining the army.

Tuck also identified the Sulpicius family, who settled in Cumae after fleeing Pompeii. This connection was aided by the discovery of a strong box on a road outside of Pompeii, seemingly dragged by the family as they escaped before being abandoned. The box contained financial records, showing that they had business connections in Cumae which might explain why they chose to settle there.

Tuck not only searched for names, but any evidence of culture or artefacts that are unique to Pompeii and Herculaneum. This included signs of worshipping Vulcanus, the god of fire, and Venus Pompeiana, the patron god of Pompeii. Through this he found Vettia Sabina, a female refugee who was buried in a family tomb in Neopolis. The tomb was inscribed with the word ‘HAVE’, meaning ‘welcome’ in the Oscan dialect, which was spoken in Pompeii. The most famous example is on the welcome mat outside the House of Faun, Pompeii.

Tuck explained that the Roman Government’s response to the refugee crisis was very different to the modern governments of today. Instead of immediate action, Emperor Titus waited until the refugees had settled in other cities then sent money to help build new infrastructure such as baths and aqueducts. In actuality, the money for these projects didn’t come from Rome, but had been claimed by the government from those that had died without issue in the eruption. While Titus took all credit for the infrastructure, the names of those who actually paid for it have long since been forgotten.

Unfortunately, there is no way to know just how many refugees survived from Pompeii and Herculaneum. Alongside the names that have been found from inscriptions, there were many foreigners, migrants and slaves who didn’t have their names recorded, making them harder to track. Tuck made it clear that it is something that we will likely never know:

“How many refugees escaped is a question that cannot be answered with any certainty; the evidence simply is not good enough to allow for anything like accurate counts.”