Was Napoleons defeat at Waterloo caused by a volcanic eruption? 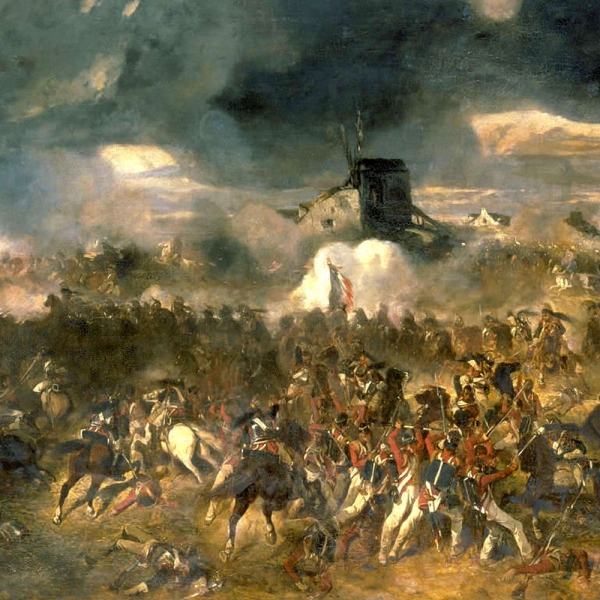 As we leave the summer behind and embark upon our autumn tours, one tour that never fails to excite is our classic “Walking Waterloo” tour in October. A staple for every Napoleonic enthusiast, the Battle of Waterloo is such an iconic, pivotal and well-debated event that it is unusual to uncover new information. However, that is exactly what has happened. A paper presented by Dr Matthew Genge in ‘Geology’ shows evidence of how a volcanic eruption, over 7,000 miles away, could have affected the outcome of the famous battle. One debate travelling in academic, literary and scientific circles is over the weather and the possibility it could have contributed to Napoleon’s dramatic defeat. Perhaps the most widely and well known is Victor Hugo in his 1982 novel Les Miserable: “…an unseasonably clouded sky suffices to bring about the collapse of a World”. Genge offers a scientific explanation for the unexpected cold and wet weather which is believed to have significantly influenced Napoleon’s strategy and, ultimately, his downfall.

The debate over the weather being a significant contributing factor in Napoleon’s defeat refers to several incidences over the course of the three days that affected the tactics used by both sides. June 17th, 1815 was a day of strategic retreat for the Anglo-Dutch and Prussian forces, aided by the ominously dark clouds and heavy rain. It made the conditions of retreat difficult, but encouraged hesitancy within the French forces, who did not overrun their enemy despite being in a stronger position. The controlled retreat along the Brussels Road meant that the Prussian forces were crucially able to remain within marching distance of Wellington’s forces, meaning that they could come to his aid within a few hours. It also allowed the Anglo-Dutch forces to occupy the defensive ridge at Mont St. Jean on the morning of the 18th.

Some partly attribute Napoleon’s decision to delay the start of battle on the 18th June to the bad weather. The soft ground caused by torrential rain throughout the night meant that it was nigh-on impossible to move artillery batteries through the mud quickly. The softer ground also reduced the impact and usefulness of traditional cannon firing tactics. Whereas cannon were usually fired so that the ball would skip over the ground to cause more damage to infantry, the conditions rendered the artillery less effective. This may have been why Napoleon’s army was not fully drawn up by the early morning, the intended time of attack, and why Napoleon supposedly took the advice of General Antoine Drouot, an artillery veteran and temporary commander of the Imperial Guard, to wait for the ground to dry out.

The night’s rain created a field of confusion and poor visibility, the genuine ‘fog of war’. The shallow valley between the Anglo-Dutch forces on the ridge at Mont St. Jean and the French forces on the ridge at Le Belle Alliance would have been filled with mist, damp rye fields, and the cloying smoke from cannon and musket fire which may have prompted Napoleon to wait until visibility became clearer. The sodden rye fields would have made it more difficult for the musket and rifle wielding infantry to advance as it would be a challenge to keep powder dry. It would have also made it more difficult for horses to negotiate the ground, slowing the cavalry charges. But, perhaps the most important upshot of the delayed start was the opportunity that it gave for the Prussian army to unite with the Anglo-Dutch forces under Wellington, unaffected and undeterred by Mashal Grouchy’s attempts to prevent them joining the battle.

Dr Matthew Genge has shown in his paper ‘Electrostatic levitation of volcanic ash into the ionosphere and its abrupt effect on climate’ that the eruption of Tambora, Indonesia a few months before the battle in April 1815, can explain the abnormal weather that affected the battle conditions. Volcanic eruptions are known to have potentially global climactic effects. In fact, Tambora is responsible for the 1816 ‘year without summer’, as the spread of ash in the atmosphere caused crop failures and multiple deaths through exposure and starvation in Europe.

However, more powerfully explosive eruptions can result in the electrostatic levitation of charged ash particles, the lifting of charged particles within an electrical field, into the Ionosphere. The Ionosphere is an electronically charged part of the Thermosphere in the upper atmosphere. It contains negative free electrons and positive ions which are briefly attracted to each other by electromagnetic force, then quickly separate as they are too energetic to fully bond. The introduction of more charged particles causes a significant disruption which ‘would likely have an abrupt global effect on cloud formation, and thus climate’.

Tambora was explosive enough to expel charged ash particles into the Ionosphere, measuring 7 on the Volcanic Explosivity Index (VEI). To put it into perspective, Mt St Helen, which erupted in 1980 measured at VEI 5, and the eruption of Eyjafjallajökull in 2010, which severely disrupted airways and air travel across Europe for months only measured VEI 4. This adds credence to the theory that the eruption would have had a sudden impact on cloud formation. This sudden impact, caused by the ‘suppression and subsequent recovery of cloud formation owing to levitation of volcanic ash’ could explain why there was unseasonably wet weather during May and June of 1815 and therefore, during the Battle of Waterloo.

While the weather may have influenced the tactics and strategy employed during the battle, there are many other, potentially more significant contributing factors to Napoleon’s defeat. Arguably, the delay on the morning of the 18th would have made little difference to the saturated state of the ground. Visibility on the field would have been obscured by the smoke of cannon and musket fire regardless of the mist settled between the two defensive ridges. Advisors and generals on both sides would have known this and been able to plan accordingly. Napoleon might have been more successful had he attempted to outflank Wellington instead of launching a daring full-frontal assault. Equally, it cannot be forgotten that Wellington had almost won the battle by the time Blϋcher’s Prussian army arrived. Napoleon’s undefeated Imperial Guard, his most elite fighting force, had already been defeated, greatly demoralising the French forces. The Prussian reinforcements could be seen as a confirmation of Wellington’s victory rather than offering any drastic contribution in creating the victory.

In conclusion, the explanation of how the eruption of Tambora in April 1815 affected weather in Europe through electrostatic levitation of volcanic ash into the Ionosphere provides a reason for the unpredictably wet weather during the battle of Waterloo. It shows how a natural disaster on the other side of the world impacted the human slaughter that would affect the military and political face of Europe for decades. While this adds another interesting layer to the argument that the weather was a significant contributing factor to Napoleon’s defeat, it does not make it more or less likely, or give it more credence over the many other contributing factors. Therefore, the strong debate over Napoleon’s defeat rages on.

If you would like to know more about the Battle of Waterloo and the different arguments regarding the tactics from both sides, join us on our classic “Walking Waterloo” tour where you will walk the battle lines and sites, or our new “The Hundred Days” tour which follows the Napoleonic Army’s last march from Paris to their fated defeat in Belgium.

Genge, M.J., 2018, Electrostatic levitation of volacanic ash into the ionosphere and its abrupt effect on climate: Geology,