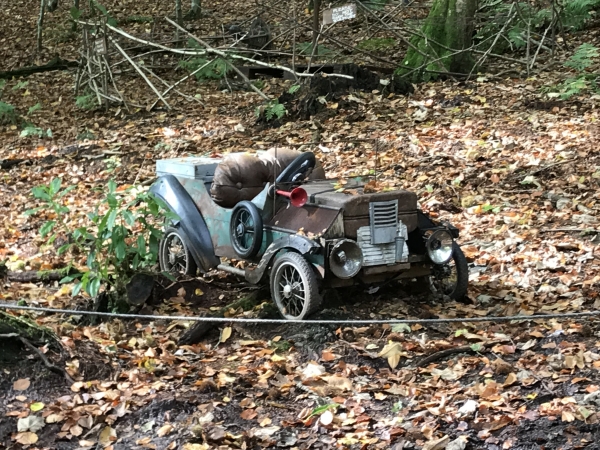 Commissioned by the National Trust to commemorate the effect of WW1 on the local community, The Scraptors Sculpture Group have created a sculpture trail in Stourhead entitled ‘Stourhead will never forget’ and our operations manager Emma took a trip to see it over the weekend.

The six installations at Stourhead are in the estate beyond the great lake. A giant bike near the house commemorates Ebenezer Stone, a stable boy who made a bike before World War 1. He lost both legs during the war and the installation features two giant crutches, one of which morphs into a gun and Harry Hoare, the heir to Stourhead, is commemorated with a late Victorian nursery scene, a carousel, a toy car and a toy train. The installation has references to his death at the age of 29 at Mughar Ridge, Palestine in November 1917 trying to rescue horses during a battle with the Turks.

There is a long 3D mural painted on a row of old doors and other bits of wood which shows the transformation of a landscape "From Arcadia to Armageddon." A life sized horse in the mural is ploughing a field in Arcadia but his head is hidden in a gas mask in Armageddon.

Another installation recalls Gallipoli and the Middle East where men from the Stourhead area served in the Dorset Yeomanry. There is a train bearing arms and camels, a tableau which was inspired by a photo in the Keep Military Museum in Dorchester, showing camels being transported by train through the desert.

You can visit the memorials until November and there is a detailed brochure available at the visitor centre.