Exploring Britains military history gives you the opportunity to visit a variety of sites stretcing from the days of the Roman empire to the Second World War. Numerous battlefields, monuments, and museums mean you can follow the evolution of warfare with realtively little travelling. Whether self-driven or with a private driver-guide, you can visit sites such as the magnificent Tank Museum at Bovington, Portsmouth Historic Harbour, RAF Uxbridge, Bletchley Park, the battlefields of Bosworth and Naseby or the Air Museum at Duxford, plus numeous others of your choice. You can base yourselves in a number of towns and cities around the country, many of military importance themselves and also soak up some of the British culture along the way.

You may choose to make this a self-drive tour or we can arrange for your expert guide to pick you up and take you from destination to destination. We can also arrange train travel for longer journeys.

We can provide an expert guide, who can accompany you throughout your tour if you so wish.

Base yourself in any conviently placed town or city, whether it's a piteresque medeval town or a more vibrant bstling city, whatever suits you best.

You can combine any of these sites, along with any others (military related or not), to create your perfect itinerary.

"I wanted to thank you for helping to arrange the driver. Sebastian was great and made things much more enjoyable than us trying not to kill ourselves driving on the wrong side of the road."

This is merely a suggested itinerary and can be tailor made to your interests and needs;

Day 1 - Southampton. Drive or take the train from London to Southampton. Check in to your hotel for 3 nights.

Day 2 - Bovington. Spend the day at the Bovington Tank Museum. The exhibitions tell the story of armoured warfare from World War One to the present day. As you explore the Museum's six large halls you will come face to face with vehicles that have seen action in all the major wars of the 20th Century and hear first-hand accounts from those who fought in them. This unique collection of over 300 vehicles is regarded as the best in the world and includes the world's first ever tank - Little Willie, the feared German Tiger tank and the modern Challenger 2.

Day 3 - Portsmouth. A day exploring Portsmouth Historic Dockyard where you can visit the National Museum of the Royal Navy to learn about the Royal Navy’s amazing and diverse history, climb aboard Nelson’s flagship HMS Victory and visit the award-winning Mary Rose museum. Time permitting visit Fort Nelson, an imposing Victorian fort that is home to the Royal Amouries national collection of artillery, and Portchester Castle, the most impressive and best-preserved of the Roman 'Saxon Shore' forts.

Day 4 - Uxbridge & Bletchley Park. Travel from Southampton to RAF Uxbridge for a guided tour of the Battle of Britain bunker and museum. Visit the the No.11(Fighter) Group Operations Room at RAF Uxbridge which was responsible for planning and coordinating the air defence of London and South East England during World War II. Today the room is shown exactly as it was on 15th September 1940, the day on which Winston Churchill visited and witnessed the conduct of the most significant day of the battle of Britain.
After lunch, continue to Bletchley Park, until recently Britain’s best kept secret and now a treasured heritage site designed to preserve the important story of the Codebreakers during WW2
Check in to your comfortable hotel near Northampton for two nights.

Day 5 - Bosworth & Naseby. This morning we visit Bosworth Battlefield. Discover how the Plantagenet reign ended and the Tudor dynasty began when Richard III lost his life and crown on the battlefield at the hands of Henry Tudor’s army. Continue to arguably the most important battlefield in England, Naseby, where the Civil War was settled. Naseby was a victory for the army ‘new modelled’ – Britain’s first regular, red-coated soldiers and is, for many, the birth place of the British Army. The victory established Parliament’s right to a permanent role in the government of the kingdom. Explore this largely unspoilt battlefield and stand on the ground where democracy was won.

Day 6 - Imperial War Museum, Duxford (near Cambridge). This historic airfield and museum tells the stories of those who lived, fought and died in conflict from WW1 to 1969. Continue to London where you will say farewell to your driver.

Similar itineraries can be arranged throughout the UK. Please contact us with your requirements. 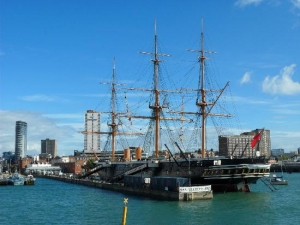