Our tour begins on the spectacular Greek Island of Santorini, formed by the caldera that resulted from a cataclysmic volcanic eruption of 3500 years ago, where we visit the impressive remains of ancient Akrotiri and Thira. Our adventure continues as we travel by catamaran to Crete, one of Greece’s most beautiful islands famous for its wildflowers, magnificent scenery and for being home to the Minoans, the world’s first advanced civilisation. Positioned at the crossroads of three continents, the island has held an important role in the Mediterranean region throughout history, both ancient and modern. A prized possession of major powers from the third millennium BC through the cultures of the Minoans, Mycenaeans, Romans, Byzantines, Venetians and Ottomans, and as an occupied territory of Hitler’s Third Reich.

The lost world of the Minoans has intrigued people for thousands of years. Europe’s first great civilisation, an advanced society of artisans and skilled civic engineers with a maritime empire so vast it rivaled that of the ancient Egyptians, was inexplicably, and at the height of its power, wiped from the pages of history. The predominant theory regarding that destruction was that it was provoked by something as violent and as sudden as the eruption of Santorini Volcano. Ever since Sir Arthur Evans discovered the lost Palace of King Minos in Crete, archaeologists and scientists have been trying to connect the two events. In the summer of 1988, however, archaeologists digging on the island of Mochlos in Crete uncovered architectural and ceramic remains indicating that the civilisation continued to flourish for some 150 years after the eruption in about 1600 BC. With the new discovery, archaeologists find themselves searching for an alternative explanation for the sudden fall of the Minoan civilisation around 1450 BC. If the Theran volcano was not to blame, what then did bring about the fall of the Minoans?

Depending upon your preference either fly from London Gatwick (easyJet) or Heathrow (British Airways) to Santorini and check in to our hotel for two nights.

We explore the extraordinary Bronze Age site of Akrotiri buried by ash following a volcanic eruption c1500. In the afternoon we visit the excellent Prehistoric Museum of Fira which houses finds from the excavations.

The ruins of Ancient Thera, which became the urban centre controlling the whole island once Akrotiri was destroyed, are located on the western slope of Mount Vouna. The site offers spectacular views over cliffs that drop into the sea on three sides. We take the late afternoon catamaran to Heraklion where we check in to our hotel for five nights.

Explore the Minoan palace of Knossos, with its hundreds of small, interconnected chambers, conjectured to have been the Labyrinth of legend. In the afternoon we return to Heraklion to visit the Archaeological Museum, one of the most important of its kind in Greece. Fully re-opened in 2014 following an eight-year refurbishment.

Drive to the south of the island to visit three Minoan sites: Gortyn, particularly noteworthy for its Law Code, a lengthy wall inscription created in the 5th century BC; Phaistos, the second largest palace complex after Knossos; and the small but impressive site of Agia Triada where some of the most important artefacts of the Minoan period were excavated.

Drive to Malia, the third-largest Minoan palace in Crete, built in a wonderful setting near the sea and Lato, the Dorian city state and birthplace of Nearchos, the admiral of Alexander the Great, from here the view down to Lato’s ancient port, Agios Nikolaos, is magnificent. In the afternoon we take a boat across to the island of Spinalonga, former leper colony and Venetian stronghold.

Travel to the east of the island to visit Gournia, the best example of a Minoan town in prehistoric Aegean, excavations continue today. After lunch we take a boat trip to Mochlos, one of the largest and most significant of the surviving Early Minoan cemeteries in Crete. Excavators have uncovered more constructed tombs here than at any other cemetery of any period.

Excavations have brought to light a Minoan villa, a well-preserved oil press and storeroom containing jars. The distinguishing feature of this archaeological site is a tripartite sanctuary that was found within the villa’s precinct. Continue to Heraklion airport for our afternoon flight to London Gatwick (easyJet or British Airways - there are no scheduled flights to Heathrow). 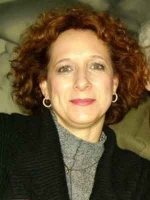 Dr Rita Roussos studied ancient Greek and Latin at the University of California, Berkeley and completed her PhD in History of Art at the Courtauld Institute of Art, University of London. For many years she was Professor of Art History and Classical Archaeology and Head of the Liberal Arts Department at the American University of Athens. 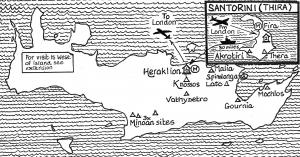 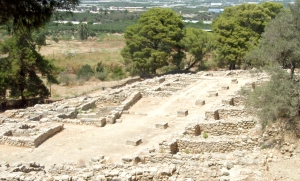 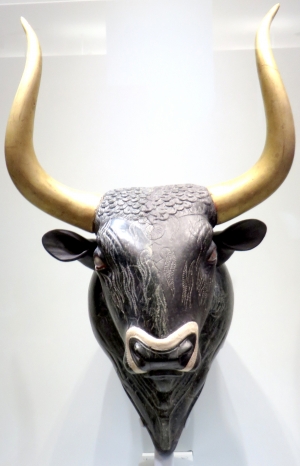 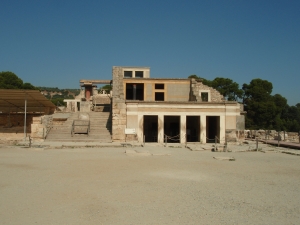 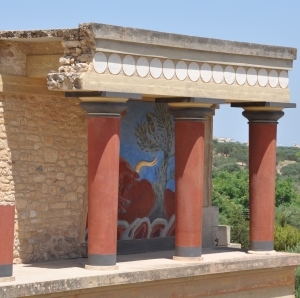