Travel through the ‘Big Sky Country’ of Montana, the vast plains and Bighorn Mountains of Wyoming and the imposing Yellowstone National Park to discover spectacular geological structures, gaze at awe-inspiring natural wonders, watch majestic wildlife roaming in their natural habitat and follow the footsteps of one of America’s iconic and controversial characters to the battlefield of the Little Bighorn where George Armstrong Custer made his legendary ‘last stand’. Immerse in ‘wild-west’ traditions, experience native American culture and witness the remarkable re-enactment of the battle which, amongst other things, features the descendants of the Sioux, Cheyenne and Crow, many riding bareback splashing through the River and emulating the war-cries of their ancestors.

Your expert historian will be Bob Kershaw, author of ‘Red Sabbath’, a definitive history of Custer’s ill-fated campaign, and who knows the ground intimately and will dispel a number of Custer myths and examine how the native Americans were able to check the vastly superior US Army in the West after a hard fought Civil War.

The years following the Civil War and up to the end of the century saw a resumption of the ’white man’s’ expansion into the American West, unsettling the Native Americans who were not prepared to let their hunting grounds and way of life be destroyed and they proved to be particularly worthy foes. The Sioux nation inflicted a series of unexpected reverses on the United States Army, culminating in the massacre of Custer's 7th Cavalry Regiment at Little Bighorn in 1876. In 1867 the Sioux wiped out an entire company of US Cavalry in the Fetterman Massacre and fought the iconic Wagon-Box action against overwhelming odds the following year. In 1871 the discovery of gold in the Black Hills accelerated the clash of cultures so that when the US Army attempted to force Indian 'roamers' onto government reservations, war ensued. The campaign was a debacle, Crook's column was worsted at the Rosebud on 17th June 1876 and nine days later Custer's 7th Cavalry command was massacred at Little Bighorn. Revenge was finally exacted at the Battle of Wounded Knee in 1890.

"Bob Kershaws expertise in both the subject matter and in the running of the tour shone through  Brilliant all round."

Fly London to Billings, Montana and check in to our hotel for one night. Introductory talk and dinner.

Drive to Cody and immerse ourselves in the Wild West Lifestyle! Visit the Buffalo Bill Historical Centre and the Old Trail Town, a reconstructed Wild West Village which includes original cabins used by Old West outlaws Butch Cassidy and the Sundance Kid. Check in to our hotel for one night.

Drive northwards to the Mammoth Hot Springs with its complex of cascading terraces. Admire the Tower Fall waterfall, cross over Dunraven Pass in to the majestic Grand Canyon of the Yellowstone River and enjoy a magnificent vista from Artist Point. Continue up the Hayden Valley to Yellowstone Lake from where we retrace our steps to Cody for one night.

Drive through the awe-inspiring Bighorn Mountains. On arrival we investigate the grim site of the Fetterman Massacre, the incredible Wagon Box Fight and visit Fort Phil Kearney. Continue to Sheridan and check into our hotel for the night.

Explore the remote battlefield of the Rosebud, where Crook's Column was worsted by the same Sioux who overcame Custer at the Little Bighorn. Continue to Billings and check in to our hotel for three nights.

A full day devoted to exploring Custer's Last Stand at the Battle of the Little Bighorn, including the Reno-Benteen fight, the museum and the National Cemetery. Like most battlefields in the US, Little Big Horn has been beautifully preserved, allowing a clear picture to be drawn of how the action unfolded from both perspectives. 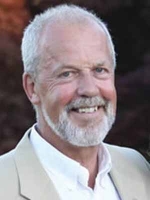 View images of our most recent Custer tour here 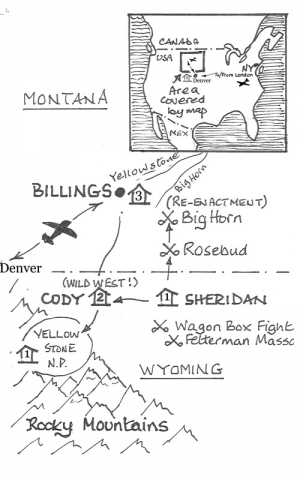 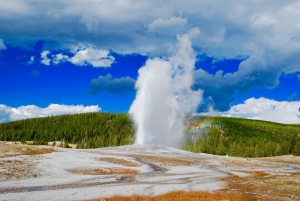 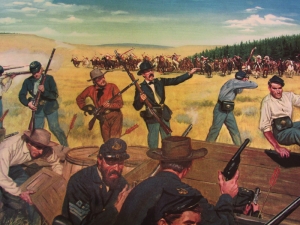 The Fight At Wagon Box 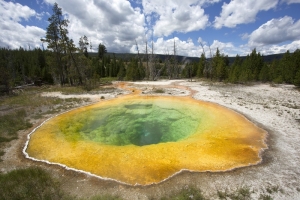 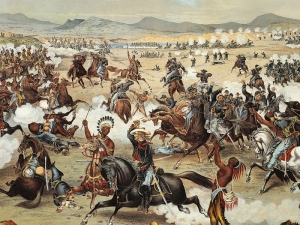 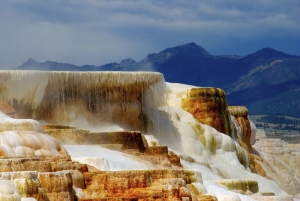 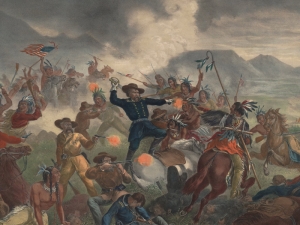 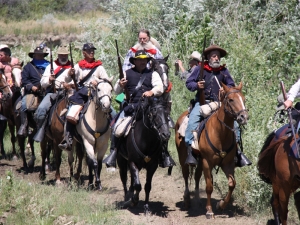