This five-day Western Front tour provides an overview of the major events involving British and Empire forces in Northern France and Belgium: it is both an introductory tour for the novice and an essential ‘aide memoire’ to those more familiar with the First World War. At selected key locations, cemeteries, monuments and memorial parks in and around Mons, Ypres, the Somme and Arras you will hear of the human experience, gain an appreciation of the ground, discuss the effectiveness of the tactics and weaponry employed, challenge the strategy and capability of the commanders and question the impact of logistics and morale. Our list of sites is not exhaustive, so if we have missed a particular place that you would like to visit, please ask us if it is possible to be included in the itinerary when you book.

The battlefields of the Somme and Ypres saw the shedding of the blood of almost one million British and Commonwealth soldiers during the First World War. Their names are synonymous with the horrors and sufferings of that conflict and the size of the monuments to the Missing at Thiepval, the Menin Gate and Tyne Cot are testament to the scale of devastation of human life. But the war was not always one of continuous static stalemate. Starting as a war of manoeuvre, the fast-moving German armies inexorably swept through Belgium outflanking all before them until the battles for the Frontiers gradually brought them to a halt and trench warfare ensued as they determined to hold the ground they had won. The next 3 years saw the Allies attempt to break the deadlock through a succession of costly and indecisive battles: Ypres, Loos, Neuve Chapelle and The Somme. But during those years both sides also significantly developed their armies, weaponry and tactics to such an extent that the final months of the war saw armies once more on the move engaging tactics that would develop in to the German Blitzkrieg of the Second World War.

We take a morning Eurostar to Lille and drive to Mons, via Casteau, where the first British shots of the war were fired on 22 August 1914. Explore the line of the Conde canal: Nimy railway bridge, where the first VCs were won; Obourg where the Germans crossed; and St Symphorien Commonwealth War Graves Cemetery where many of those who fought rest. After an absorbing day we will check in to our hotel in Mons for one night.

We will visit war poet Wilfred Owen’s grave at Ors. Owen died just one week before the armistice was declared in 1918. We then explore the rolling fields to the west of Le Cateau where the outnumbered British II Corps held the German 1st Army at bay for 24 hours on 26th August 1914. To the Somme: the great crater of Lochnagar at La Boiselle; the old front line at Mametz; the Delville Wood South African Memorial at Longueval; the Australian and Tanks Corps memorials at Pozieres. At the end of the day we will check in to our Amiens hotel for two nights

Weather permitting, we will enjoy a magnificent vista of the August 1918 Amiens battlefield from the top of the Australian National Memorial at Villers-Bretonneux. At Cachy we see where the first tank battle was fought on 24 April 1918. Returning to the events of 1916, we visit the Memorial to the Missing at Thiepval, the preserved trench lines at the Newfoundland Memorial at Beaumont-Hamel and the Sheffield Memorial Park near Serre from where the Pals battalions launched their attacks on 1 July.

In addition to the British 1915 Loos battlefield, many of today's sites featured action by Dominion and Colonial troops, including the Canadians at Vimy Ridge; Fromelles, where the newly arrived ANZACs received their 1916 baptism of fire; and Neuve Chapelle where the Indian Army made the major contribution in the 1915 victory against the Germans. Continue to Ypres for one night. We take an early evening walk around the ramparts and visit some of the less well-known sites before stopping at the Menin Gate to watch the emotional Last Post ceremony.

Our last day will include a visit to Hill 60 with its massive mine craters, Hooge Crater, John McCrae’s medical station at Essex Farm, the gas attacks at Vancouver Corner, Langemark German cemetery, Vancouver Corner, Passchendaele Museum and Tyne Cot cemetery. Drive to Lille for our return Eurostar to London. 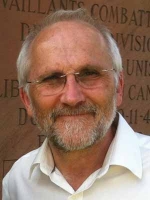 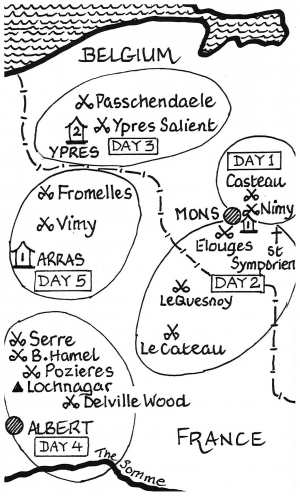 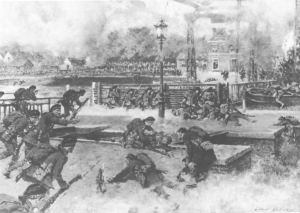 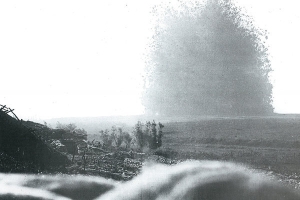 Explosion on the Somme 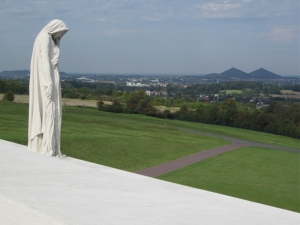 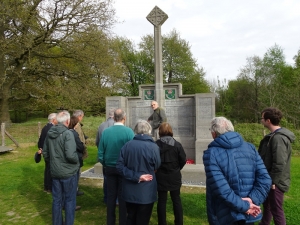 Dr Cherry in action at Hill 60 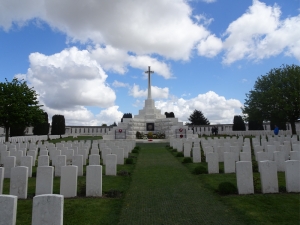 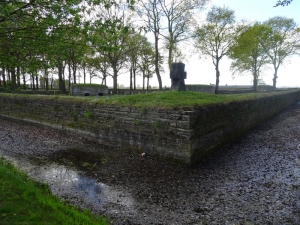