This tour showcases one of the oldest standing ensembles of military architecture in Western Europe and includes watch-towers and castles like Gormaz, a massive edifice with sides ¼ mile long, and the double castle at Berlanga both once held by the Cid. The area is full of early Romanesque churches which bear witness to the faith of these warriors who saw themselves as crusaders, just as important as those who fought in the Holy Land. And our four-star accommodation is no less historical, most having been built hundreds of years ago: respectively a former monastery, hostel, contemporary hotel and a university all situated in the heart of some of Spain’s oldest cities.

The tour is accompanied by leading academic, Dr Andy Fear, of Manchester University, who combines his extraordinary knowledge of Medieval Spain with his huge personality to create a fascinating narrative of El Cid, his times and the Christian's Reconquista of the Iberian Peninsula.

The recovery of Spain from Moorish rule was a long and complex process. This tour starts at the beginning of the story by visiting the site of King Pelayo’s victory over the Moors at Covandonga in AD 722 and then follows the expansion of the kingdom he forged first in Oviedo. Here we’ll see the palace complex built by King Ramiro I in the ninth century and the pantheon of other early Asturian kings, along with the sacred crosses they believed brought them victory in battle and the “Spanish Turin Shroud.” We then cross the mountains to the old Spanish capitals of Leon and Burgos where the figure of the Cid comes to the fore. An extraordinary soldier of fortune whose turbulent life was lived out around the Burgos and encapsulated in Spain’s national epic here.

En route we will also meet the Cid’s King Alfonso the VI, Fernan Gonzalez, the founder of Castile, Alfonso X, Spain’s answer to Alfred the Great, and bones of the saints who inspired them.

"Awesome is a word easily banded about but it fits my experience, inspired & at times totally flabbergasted by the history"

Drive to Covadonga, the site of Pelayo’s victory over the Moors and his final place of rest. Continue to the Parador of Cangas de Onis, a former monastery and our base for the first two nights. Introductory talk and dinner.

This morning we travel out to Oviedo, the medieval capital of Asturias, where within its San Salvador Cathedral we find the Camera Santa and its “holy chest” of relics, opened in presence of the Cid and containing two war crosses and its Holy Shroud, the Sabana Santa. The cathedral also houses the “refugee” relics of Santa Eulalia and the Pantheon of early Asturian kings. We visit the pre-Romanesque church of San Julian de los Prados with its well-preserved wall paintings and the Naranco Hill complex, another pre-Romanesque church adjacent to a royal audience hall. We return to Cangas de Onis and visit the tomb of Favila, the 2nd King of the Asturias who was killed by a bear!

We move on to Leon, via Sta Cristina de Lena where we find a fine example of a Cid period church. In Leon itself we explore the Basilica of San Isidore, the French gothic style Santa Maria Cathedral and the city’s museum. Check-in to the magnificent 16th century Parador, the Hostel de San Marcos for one night.

We drive to the uniquely styled San Miguel de la Escalada church, built by refugees from Moorish Spain, Mansilla de las Mulas with its fine mediaeval walls alongside the river, the tomb of Alfonso VI and brick-built Mudejar churches in Sahagun and Palencia, where the Cid was married and which boasts an ostentatious cathedral housing a crypt and a museum. Continue to Lerma, and check-in to its amazing Habsburg era ducal palace, our Parador hotel for the next two nights.

This morning we explore Burgos, in particular the Santa Maria cathedral, which houses the tomb of El Cid, Santa Gadea where he forced Alfonso VI to swear his oath and Sta Maria de las Huelgas where Edward I was married, which now houses a fine collection of medieval textiles. After lunch we visit San Pedro de Cardena monastery, Cid’s initial burial place, Bivar where he was born, Mecerreyes with its wonderful statue and Covarrubias where Fernan Gonzalez, the founder of Castille, is buried.

To San Millan de Cogolla and the outstanding UNESCO listed Yuso Monastery. Thence to the excellent Clavijo castle and ruined monastery, the site of a mythical battle in which Santiago appeared. We end our day at the ruined cloister of San Juan de Duero in Soria before travelling to Burgo de Osma, with its fine medieval streets and walls and check-in to the Renaissance-era former university, our hotel for the last two nights.

We head to Calatanazor a medieval village complete with castle and rock-cut graves, where the great Moorish warlord Almansur was fatally wounded in battle. We then explore a number of castles and churches that came under the influence of the Cid: the spectacularly sited Gormaz, Berlanga, Carecena, likely site where the poem of the Cid was written and the church of San Baudelio with its palm roof.

We explore the fine Moorish walls of Buitrago dating from the period of the Cid and the 14th century Mendoza castle. Thence to Madrid and our flight home. 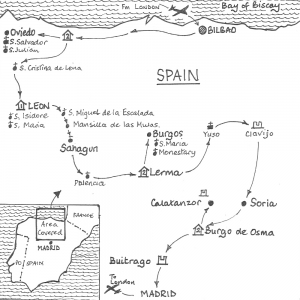 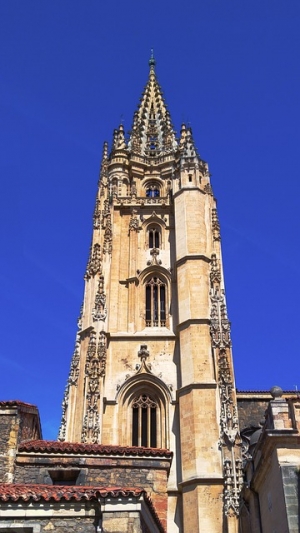 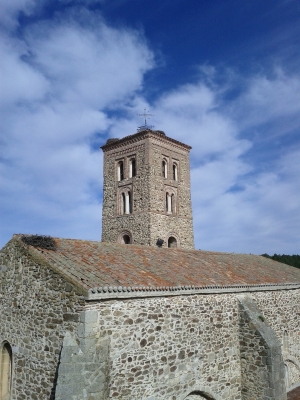 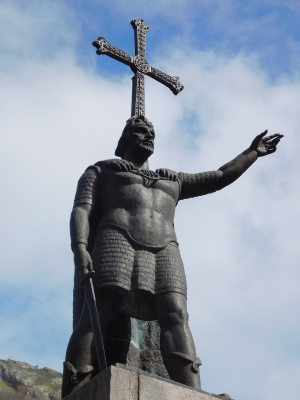