By a poignant quirk of fate, British forces fired their first and last shots of the Great War in the Belgian city of Mons. Today, the first and last British casualties from 1914 and 1918 lie buried, together with their former German foes, in the remarkable St. Symphorien Cemetery.

The stand along the canal at Mons on 23rd August 1914 against massed German armies by the tiny British Expeditionary Force (BEF) resulted in the first four Victoria Crosses of the war being awarded. A second heroic defence at Le Cateau three days later could not halt the 'Retreat from Mons', which continued until the German advance was defeated at the Marne.

In 1918, the dramatic Allied advances in the last months of the war saw Le Cateau retaken in October, followed on 4th November by the capture of the fortress town of Le Quesnoy and the crossing of the Sambre Canal. Canadian forces were advancing into Mons on the morning of 11th November when, at 11am, the Armistice came into force. They were back where it had all begun, more than four years before.

The armies of 1914 looked for inspiration from the battles of Napoleon, but the British Army, bloodied in the Boer War, had developed 'Fire and Movement' tactics with rapid and accurate musketry. At Mons and Le Cateau, the tiny BEF could only momentarily slow the German juggernaut, which the Schlieffen Plan had directed through Belgium. By the end of 1914, the original BEF of professionals and reservists was all but destroyed.

The BEF of 1918 comprised experienced veterans and teenage conscripts in a British Empire force which spearheaded the advance to victory. The Battle of the Selle broke the German line in October 1918 and was followed on 4th November by the Battle of the Sambre, which resulted in an advance on a 25 mile front to within 15 miles of Mons.

We depart London St Pancras by Eurostar to Lille and drive to Mons along the highway on which the dramatic first skirmish occurred on 22nd August 1914 between the Royal Irish Dragoon Guards and German Uhlans. This is commemorated by a memorial standing just across the road from a plaque marking the final outpost of the Canadian 116th Battalion on 11th November 1918. We explore the battle along the salient formed by the Mons canal on 23rd August 1914, from the 4th Middlesex at Obourg Station to the 4th Royal Fusiliers at Nimy Rail Bridge where Dease and Godley won VCs. Check in to our hotel in Mons for the three nights of the tour.

We follow the canal line on the British left flank to Les Herbières, where the East Surreys were surrounded and many now lie in the nearby cemetery. A costly rear-guard action at Elouges on 24th August by cavalry, infantry and gunners aided the withdrawal. We have a lunch break in Le Cateau where, on 26th August, Smith-Dorrien halted and fought once more. We study the battle at key locations, including the Suffolks' Memorial, where the guns and infantry held out side by side. On 17th October 1918, Le Cateau was retaken in a daring assault, the River Selle was crossed and another German defensive line breached.

We focus on the last major offensive of the war at two dramatic locations. At the picturesque fortress town of Le Quesnoy we retrace the route of the New Zealand Rifle Brigade through Vauban's ramparts to the exact spot where they scaled the walls with ladders. After lunch, we travel to Ors where four VCs were won during the crossing of the Sambre Canal on makeshift rafts under heavy fire. Here the poet Wilfred Owen lost his life and we also visit the original cellar in which he wrote his last letter and his grave which is alongside those of two of the VC winners.

We trace the painstaking advance into Mons by Arthur Currie's Canadians on the 11th November and the spot where the last man to be killed, Private George Price, was shot by a sniper. In St. Symphorien Cemetery we see his grave, close by that of Private George Ellison, also killed on the morning of the 11th. Both lie just a few yards from Private John Parr, the first British soldier killed on 22nd August 1914. With a lunch break in Mons and a visit to the innovative new Mons Memorial Museum, we drive to Lille for our Eurostar home. 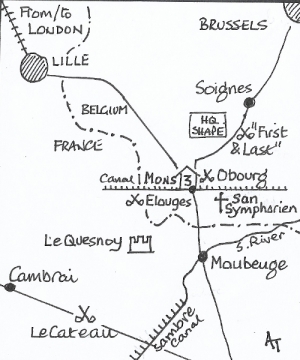 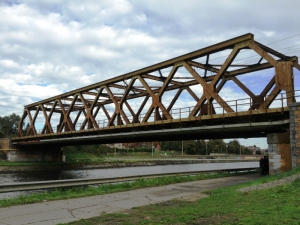 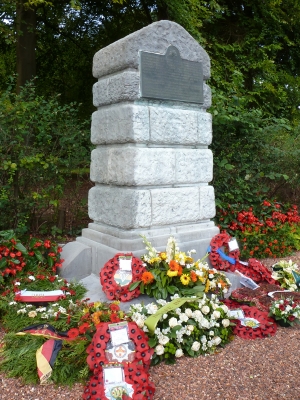 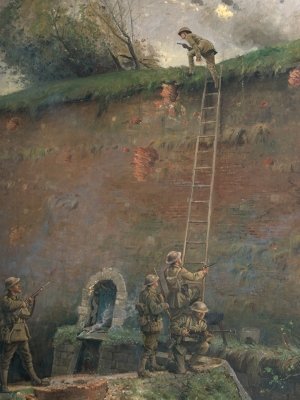 George Edmund Butler - Scaling of the walls of Le Quesnoy