Georgia is one of the great undiscovered tourist destinations of this century. See the fabulous monasteries and cathedrals that characterise the landscape, history and society of this mountainous country, from the recently finished Sameba Cathedral to the ancient Anchiskhati Basilica. Witness the steadfast forts of Nokalakevi, believed to be where Jason and the Argonauts stole the Golden Fleece and Khertvisi, destroyed by Alexander the Great and rebuilt in the 10th Century. Climb through the cave cities of Uplistsikhe and Vardzia, once the refuge of whole nations now the home of fabulous frescoes and wall carvings. Discover the isolated medieval communities of Svaneti and their curious tower houses, and wander the vibrant streets of Tbilisi and Kutaisi.

Georgia’s history has a length and breadth that many countries cannot hope to compete with, from evidence of the earliest humans outside of Africa some 1.8 million years ago to the disturbingly violent clashes with separatist movements and fractious political protests throughout the last thirty years. Initially the two kingdoms of Colchis and Iberia, Georgia has an ancient history full of legend: home to the Golden Fleece, ravaged briefly by Alexander the Great’s armies and the setting for countless wars between the Persians and the Byzantine Empire. The 10th – 13th centuries offered a reprieve and the birth of a Golden Age of culture and learning under the rule of King David the Builder and his granddaughter, King Tamar. Subsequent invasions by Mongol Hordes and the occupation by the Ottoman Empire destroyed this Golden Age, making Georgia a divided nation characterised by border squabbles and constant wars between the Ottomans and the Persians.

Initially encouraged in the early 19th Century as a means to gain independence, Russian suzerainty developed into the steady annexation of Georgian regions from the Ottomans. After a series of brutally suppressed nationalist uprisings, Georgia briefly gained independence, but the refusal of membership to the League of Nations in 1921 helped to drive the Georgians to the Bolshevik Red Army, who invaded and established a Soviet Regime shortly afterwards. Georgia declared independence in April 1991 after the fall of the USSR, beginning a long process of peaceful and violent protests, including the Rose Revolution of 2003.

Fly London to Tbilisi and check in to our hotel for two nights.

We will spend the whole day in the capital, enjoying a walking tour of the old town. In the afternoon visit the National History Museum, with its spectacular Gold Rooms.

We will travel to the religious and spiritual centre of Georgia, starting with the beautiful and spectacularly sited 6th century Jvari monastery that overlooks the town. We continue with a brief walk to the town’s ancient citadel of Armaztsikhe (modern Bagineti), before visiting the UNESCO World Heritage Site of Mtskheta for lunch. Walk around the imposing 11th Century Svetitskhoveli Cathedral, still the site of important Georgian ceremonies today. According to legend, King Giorgi amputated the architect’s hand so that he could never design a rival to it. Travel onwards to the 18th century hilltop town of Sighnaghi for dinner before continuing on to our hotel in the enchantingly beautiful wine region of Kakheti.

Our first stop discovering Kakheti is the 16th–17th century royal capital of Gremi, with its caravansarais, small museum, impressive castle and the frescoed Church of the Archangels. We continue our tour of this picturesque province with the 10-11th Century Alaverdi Monastery, home to the second tallest cupola in Georgia, early frescoes and a long wine-making tradition. After a lunch break in the charismatic town of Telavi, we head to the sprawling estate of the princely Chavchavadze dynasty. A literary family, who helped bring enlightenment ideas to the South Caucasus, we will visit the house museum to learn about their history with Russian Tsars, savage attacks, and — most importantly – wine, before walking through the decorative gardens reminiscent of Georgian England. Return to Tbilisi for the night.

Drive up the famous strategic “Georgian Military Road” through the mountains of the Great Caucasus to see the highest peak in the range, Mount Kazbegi. After lunch in the remote town of Stepantsminda we explore the nearby Gergheti Sameba (Trinity) picturesquely situated on the lower slopes of the great mountain. We drive to the limits of northern Georgia to see the mountain pass that controlled access to this region from Late Antiquity onwards and some of the fortifications associated with it. We return to Stepantsminda for dinner and for the night.

Drive to Gori, birthplace of Joseph Stalin and visit the palatial Stalin Museum. Completed after his death, its exposition of Stalin’s life and revolutionary career survived Khrushchev’s de-Stalinisation, making it a fascinating ‘museum of a museum’. Travel on to the late Roman cave city of Uplistsikhe. See the Pagan and Christian temples side by side with the famous Queen Tamar’s Hall, the so-called ‘theatre’, and other carved dwellings, shops and workshops. Continue to Kutaisi for the night.

In the morning we visit Kutaisi’s citadel, with its sixth century palace complex and the splendid 11th century Bagrati Cathedral. We then travel to the intriguing isolated province of Svaneti, high up in the Caucasus Mountains. This remote collection of communities will take us completely off the tourist track to medieval villages where the building, living and land use practices of centuries past are still employed today. On arrival take a short walk through the town to see the unique tower houses and visit the tiny frescoed Laghami Church before sitting down to a sumptuous traditional evening meal. Check-in to our Mestia hotel for 2 nights.

Today we will travel through unparalleled landscapes to reach the highest settlement in Europe, visiting ancient frescoed churches en route. Wander along the scenic roads of Ushguli, another medieval settlement and explore the colourful 12th Century Lamaria Church nestled in this village against a stunning alpine backdrop. We will see and learn more about the rich, distinctive history of this region. In the afternoon, we make our way to the Mestia Museum of History and Ethnography to see some of the riches secreted away during the multiple invasions and conflicts of the lower country and the alien, non-progressive lifestyles of these captivating people.

An early start sees us at the impressive 19th century Dadiani Palace, home to one of the earliest museum collections in Georgia, complete with curiosities connected with the life of Napoleon including a rare original death mask. Housed in a unique mansion, this palace still displays several national treasures. including archaeological finds from Dadiani’s mid-19th Century excavations at the major site of Nokalakevi, and it is to this ancient city we head next. The 4th Century fortress of Nokakalevi, is popularly believed to be Aia, the mythical capital whence Jason and the Argonauts stole the Golden Fleece. Today a working archaeological site, we see the impact of each historical period up close in the architecture and artefacts of this impressive defensive ruin. Move on to Kutaisi.

Today is National Unity Day in Georgia and we will spend the morning being guided around the busy streets of Kutaisi. Events today may be subject to last minute change, but we plan to visit the Kutaisi covered market and its town centre, where we will see preparations for the 9th April commemorations. Thence to Gelati Monastery, the final resting place of humble King David the Builder to see the fabulously restored, idealising frescoes and the glittering gold-gilded mosaic of the Virgin Mary, one of the largest and best in all of Georgia. We drive south to spend the night in Akhaltsikhe, through the impressive gorge of the Mtkvari River and countless clifftop fortresses such as that at Atskhuri.

We start the morning walking through Akhaltsikhe and its 9th Century castle, ravaged by Mongols, Ottomans and Russian-Georgian armies until its most recent rebirth as a cultural hub. Walk around the mosque, synagogue and darbazebi or traditional houses to see how the modern and the ancient have been blended together in this one place. Visit the museum with a particularly fine collection of artefacts from the bronze age through to the 19th century. Continue to the 12th Century cave city of Vardzia. Destroyed and exposed by an earthquake in 1283, some of these miraculous caves are still inhabited, with 600 intact dwellings along with a church, bell tower and frescoes of Queen Tamar. Stay in Vardzia overnight.

Drive back to Tbilisi through the spectacular upland provinces of Javakheti and Kvemo-Kartli. Check-in to our hotel for two nights.

Visit the open-air Museum of Ethnography where we will experience traditional living from each region in Georgia and witness some of the practices that are still employed today. We will also spend time at the Fine Art Museum and the Sameba Cathedral. 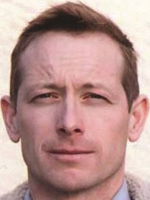 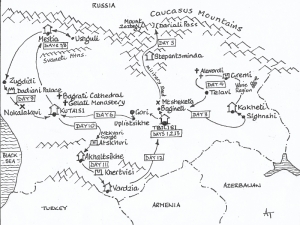 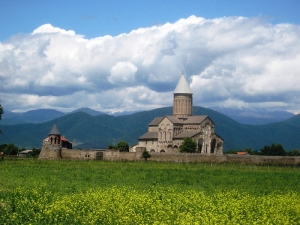 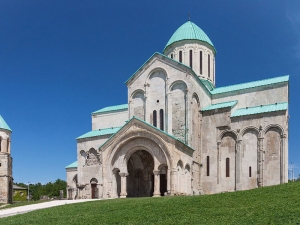 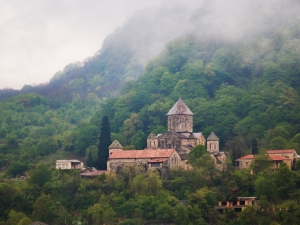 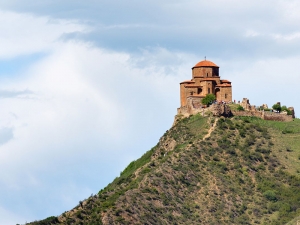 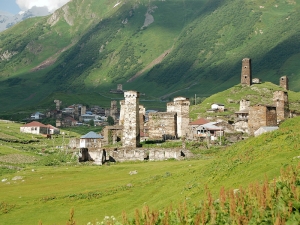 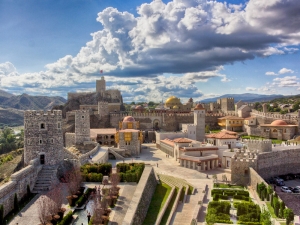 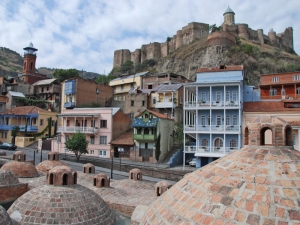 Tbilisi with Narikala Fortress in background 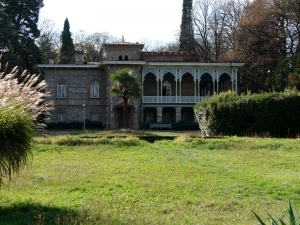