This tour is simply compelling. Your tour leader, Patrick Mercer, is the son of one of those who fought here and he spent much of his youth interviewing his father’s comrades. As such, his narrative is studded with personal stories and you will stand on the ground where men struggled, bled and died. Indeed, the evidence in this part of Italy is all around you. Dugouts, trenches, stone sangars, bunkers and tank turrets are all there to be seen - and in your expert historian you will have someone who knows exactly where to find, having walked and scrambled over this ground dozens of times.

Accordingly, the tour will traverse the mountains, rivers and streams of Cassino and central Italy right down to the coastal plain and dried up tributaries of the Molleta River north of Anzio - the infamous ‘Wadis’. Breathtakingly, we will finish in the Alban Hills at Nemi, close to the Pope’s summer palace - an idyllic spot from which German observers could see right down to the coast and Allied shipping.

After the bloodbath of Salerno and then the torture of the Volturno crossings, the US and British troops of Mark Clark’s 5th Army has to deal with the Axis Forces on the so-called Winter Line. At Camino and San Pietro the Tommies and Yanks battered their way through their enemies only to find Kesselring’s men firmly ensconced on the Gustav Line, anchored on the louring monastery of Cassino.

The epic battles to crack through the defences that lined the Garigliano River dwarfed anything that the Allies had experienced in Italy up until then. Then, spearheaded by Free French, Canadians and Poles, the offensive still had to sunder the Hitler Line before the road to Rome was clear.

Few people understand that the landings at Anzio were a daring, amphibious hook around the Gustav Line. Had they worked, had they been properly directed, the gallant German defence must have crumbled. In the event, the landings almost failed bloodily and it was only by 8th Army’s being brought to 5th Army’s help that victory was achieved.

Fly London to Rome and head to San Pietro. Having talked through the origins of the campaign and the combat leading up to the winter of 1943, you will be shown around the picturesque ruins of the village itself. Check in to our Cassino hotel for four nights.

The battles of the Winter Line are hardly understood, yet they were bloody and bitter. There should have been no pause at Christmas time, but General Clark allowed his exhausted troops to lick their wounds before closing in on the Garigliano and Cassino. First, we will see how the Guards and 56th Division took Camino. Then how the US 36th Division fought three battles for San Pietro before they failed to cross the Rapido - and the controversy that surrounded it.

Continuing the theme of the first attempt to cross the rivers whilst under the eyes of Cassino, we will examine both the British failures and successes on the Lower Garigliano. First, 128 (Hampshire) Brigade’s doomed crossings near Rocco D’Evandro before we study 56 (London) Division’s storming success at Castleforte and the shocking fighting for Damiano Ridge where Pte Mitchell of 1st Bn London Scottish won a VC. The day will culminate at Minturno CWGC Cemetery near where 5 (Yorkshire) Div crossed the Garigliano and, as an added extra, the Bourbon Bridge and Count Bayard’s exploits in 1503.

Today is concentrated around Cassino. First, we will examine the decision to bomb the monastery whilst looking at its opulent replacement. The New Zealanders’ fighting for the town of Cassino will follow, then the Polish thrust for the heights above the town. To finish the day, we will see the joint US and French flanking attack to the south of the Liri Valley before the main operation - Diadem - in May 44 to break through the Germans’ resistance. Fittingly, we will pay our respects at the Cassino CWGC as a prelude to the next day.

No account of the fighting around Cassino is complete without the Canadians’ and Free French epilogue between the towns of Pontecorvo and Aquino. The cracking of the bristling Hitler Line was a minor epic and the remains of the concrete bunkers and tank turrets which the Germans used can still be seen. From there, we will drive to the Anzio Beachhead stopping to examine the US Rangers’ attack on the Mussolini Canal and 3rd Inf Div’s bloody fight at Isola Bella and its bold assault on Cisterna in January 1944. Check-in to our Nettuno hotel for two nights.

Our penultimate day will start at Anzio and the landings there before we drive inland to Campoleone to see how 46 RTR, the Guards and 2nd Sherwood Foresters - as well as many other units - came within a whisker of capturing the town and rupturing the German line of communication down to Cassino and the Gustav Line. The mayhem at Aprilia and the Flyover before the German counter-attack was stemmed will be studied before we do what few other groups do. The ‘wadis’ fighting of Feb - May 44 epitomises Anzio yet few other guides go there and when they do they get lost! But we’ll do it and feel the atmosphere of fighting which many Germans thought was worse than Stalingrad or Sebastopol.

On our last morning we will drive up to the Alban Hills and the bijou village of Nemi where Lord Byron wrote Childe Harold. In 1944, though, it was altogether a more sinister place as the Germans used it for their artillery observers. In this wonderful eyrie, Patrick will sum up the events of those crucial months below Rome. Return flight to London. 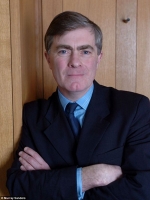 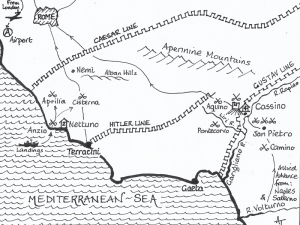 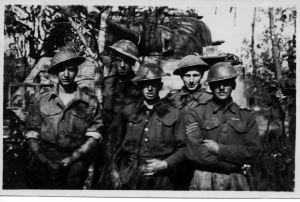 A Squadron at Anzio 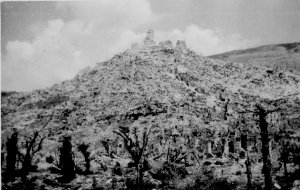 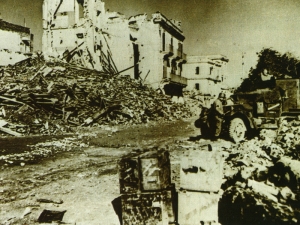 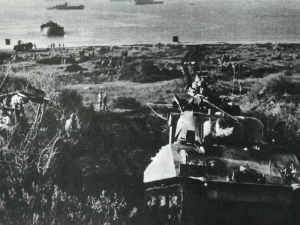 Sherman tank after landing at Anzio 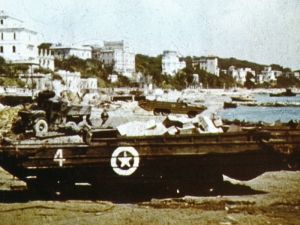