Whilst the focus of our tour is clearly on the Korean War, our journey takes us through some tranquil idyllic landscapes: pine-clad hills and mountains; emerald-green rice-paddies; stunning mist-shrouded coast-lines; glorious spring gardens. Experience the KTX ‘bullet’ train, cross vast waterways over modern awe-inspiring bridges and explore the heart of pulsating, glittering Seoul where 5000 years of tradition seamlessly intertwines with the modern. Visit magnificent palaces dating from medieval times, see classical wooden ‘hanok’ homes, savour international and local cuisine and immerse yourself in Korean culture and heritage. Get close to North Korea in the Demilitarised Zone or DMZ, explore North Korean Infiltration tunnels and learn about the latest negotiations between the two countries. Whilst no plans have been confirmed presently, we anticipate attending the 70th anniversary commemorations of the battle of the Imjin River on either Saturday 24th or Sunday 25th April. The tour will be accompanied by military historian and former infantryman Lt-Gen (Ret’d) Jonathon Riley who was Deputy Commander of NATO forces in Afghanistan (2007) and has recently published his biography of General Sir Anthony Farrar-Hockley, the much feted 1 Gloucester’s adjutant at the Imjin.

When the Japanese army in Korea surrendered at the end of WW2, the Allies agreed that those surrendering north of 38th Parallel would do so to the USSR and those below it to the USA. Capitalising on the situation, the Soviets speedily cordoned off their sphere of influence and thus Korea became a divided country. Five years of fruitless international negotiation followed, finally broken by the invasion of South Korea on 25th June 1950 by Soviet backed North Korea. Seoul quickly fell and a rapid advance by the North Koreans saw them laying siege to the perimeter of Pusan by the beginning of August, a siege that was to last for over a month. US reinforcements allowed for the simultaneous Inchon Landings outside Seoul and the breakout from Pusan on 15 September and by the end of October US forces, now reinforced by a polyglot of United Nations troops, had occupied Pyongyang and stood less than 100kms from the Chinese border. But at the end of November, a massive UN reconnaissance in force was surprised by a Chinese backed counter-offensive and by the end of 1950 both sides were facing each other across the 38th Parallel. Early 1951 saw a second Communist invasion of the South repulsed, but a redoubled effort in the Spring produced, amongst others, the heroic stand by the Gloucestershire Regiment on the Imjin River. By the summer of that year the frontline was once again running along the 38th Parallel. For the next 2 years, whilst peace negotiations stalled, a series of small-scale battles of attrition took place with neither side gaining material advantage. Finally, on July 27th 1953, an armistice was signed and the extant front-line became the agreed border, a border that still nervously exists today.

Early check in to our hotel. Morning at rest. Following a buffet lunch visit the traditional Korean village of Bukchon Hanok to amble along its narrow lanes and admire its beautiful age-old wooden ‘hanok’ houses. Take a stroll along Seoul Skygarden/park perched high above the city, returning to the hotel for an introductory talk before dinner.

Look at the first engagement of the war (5 Jul 1950) at the Task Force Smith memorial. This afternoon examine the battle for Taejon (14-21 Jul 1950), in particular the defence of the Kum River at Gongju. Visit the Gongju Museum with its ancient royal artefacts. Check in to our hotel in Taejon for one night.

En-route to Busan we stop at the Dabudong War Memorial Museum and discuss the defence of the Naktong river line at Deagu. Enjoy superb views from atop of the Chunghontop Tower and visit the nearby memorial hall. Check in to our Busan hotel for two nights.

Explore the 1950 perimeter defences, discuss the counter-attack/break out and visit the United Nations Memorial Cemetery. Cross over the 5 km-long Gwangan Bridge to Dongback island from where gain a superb panorama of Busan itself. Return to Seoul by express ‘bullet’ train and check in to our hotel for 7 nights.

A full day exploring the centre of this vibrant city: visit the magnificent Joseon Royal palace of Gyeongbokgung; witness the changing of the guard ceremony at the Gwanghwamun Gate; wander through pedestrianised Insadong with its tea-houses and shops selling a mixture of historical and modern goods; saunter along the banks of the regenerated Cheonggyecheon stream. This afternoon take a tour of the Korean War Memorial Museum which boasts 6 exhibition halls and has a wealth of aircraft, armoured vehicles and weaponry on display.

Head for Sondo Island to gain a panorama of Incheon Bay from Wolmido Hill and discuss the landings. Thence to Freedom Park to stand beside General McArthur’s statue which enjoys spectacular views over the bay and downtown Incheon. At the Inchon Landings Memorial Museum view contemporary films, a splendid amphibious diorama, weapons and poignant statues. An early afternoon finish may allow for some free exploration.

From the UN monument see where French/American forces halted the Chinese advance at Chipyong (13-15 Feb 51). Thence to Kapyong (22-25 Apr 51) to discuss the defence of the 27th British Commonwealth Brigade with visits to the Australian and Canadian monuments. End the day enjoying quiet contemplation in the beautiful ‘Garden of the Morning Calm’ which should be full of spring bloom and cherry blossom glory.

Drive to Solma-ri where, on the hills looking down upon the Imjin River, the 29th British Independent Infantry Brigade Group faced three divisions of the 19th Chinese army. Below Kamak-San Hill see where the 1st battalion of the Gloucestershire Regiment grimly defended Hill 235, visit 29 Brigade HQ at Yangyeon and drive up the former Route 11 in the wake of the 8th Hussars and the 1st Royal Ulster Rifles as they pushed forward to give support to the Royal Northumberland Fusilers defending Hill 398. With permission, we expect to attend the 70th anniversary commemoration of the battle at the Gloucester Valley Monument.

Visit the Chulwon Peace Observatory to gaze upon the hills that witnessed the pointless battles of the latter part of the war such as Pork Chop Hill and Baengma. Looking towards North Korea, see the abandoned buildings of Woljeong-ri station and the Korean Workers’ Party HQ.

Subject to access being granted (and signing a local disclaimer), visit the Joint Security Area (JSA) to visit Freedom House, House of Peace Conference Room and the Bridge of No Return. Within the wider DMZ see the Memorial to Korean War Abductees, The Last Train Out and The Bridge of Freedom. Gaze towards North Korea from the Dora Observatory and explore the 3rd Infiltration Tunnel. 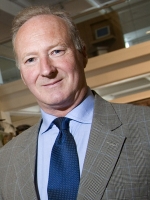 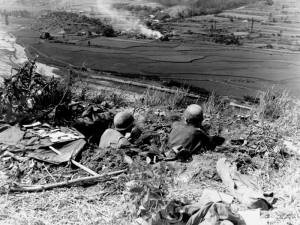 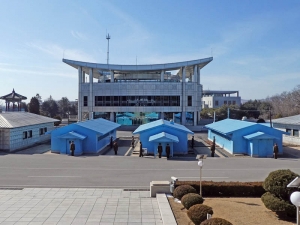 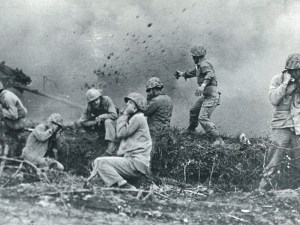 US Marine Artillery In Action 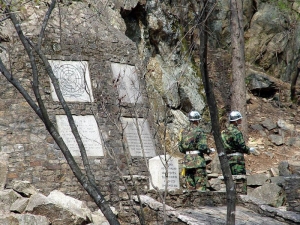 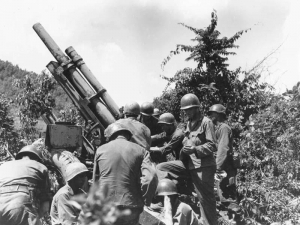 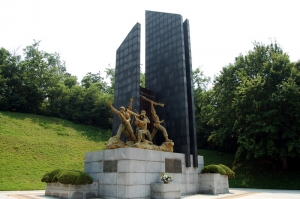 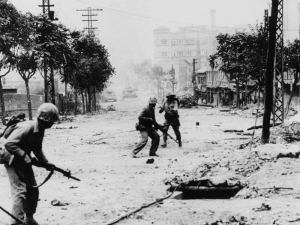 Combat On The Streets Of Seoul