The War Poets created some of the most powerful expressions of the human experience of the Great War, which have moved generations of readers ever since. This tour takes us to the trench where Henri Barbusse was a stretcher bearer, the hillside where Ivor Gurney was wounded and the Somme crucifix where he composed one of his finest songs, to the battlefield which inspired Wilfred Owen’s ‘Spring Offensive’ and the cellar in which he wrote his last letter. To understand fully the works of these great writers and musicians, we consider the context of the battles they were fighting, and hear their words and music in the precise landscapes which inspired them.

Our expert historian Simon Jones has taught literature and art of the Great War at Liverpool and Lancaster Universities. He is thus ideally placed to juxtapose the idealistic beauty of poetry and music against the horrific realities of war in a poignant and moving way that cannot fail to leave a lasting impression.

Between the patriotism and idealism of the volunteers of 1914 and 1915, to the bitter reactions after the Somme in 1917 and 1918, the literature of the Great War occupies a far wider spectrum of reactions than is often understood. Engendered by the Battles of Loos and Artois in September 1915, Charles Hamilton Sorley's poems and Henri Barbusse's novel Le Feu (Under Fire) seem avant-garde in their anger and explicit detail. In these early battles and on the Somme in 1916 we also see soldiers trying to prepare themselves for the test of battle and death and, for many, writing was a means of survival. In the works of Robert Graves and Siegfried Sassoon we also see disillusionment, intense friendships and grief for lost comrades. Poets like Wilfred Owen began to educate and shock those at home who seemed unable to understand the reality of the war, as well as to exorcise their own nightmares.

Depart London St Pancras by Eurostar to Lille. Travel to the Loos Battlefield and the deaths of Charles Hamilton Sorley and Kipling's son, my 'My Boy Jack' and the Zouave Valley beneath Vimy Ridge for Henri Barbusse. Check in to our hotel in Arras for three nights.

To Vadancourt for Gurney's poem 'The Silent One' and Fayet for Owen's 'Spring Offensive', Joncourt for his Military Cross, then his final days in November 1918 in the cellar of the Forester's House and the canal at Ors.

Arras for the deaths of Edward Thomas and Isaac Rosenberg, Thence back to the Zouave Valley for Ralph Vaughan Williams’ Pastoral Symphony. Continue to Lille for our return Eurostar journey to London. 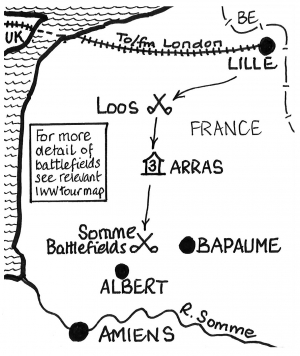 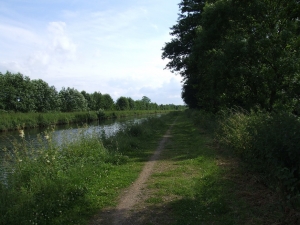 Sambre Canal at Ors where Wilfred Owen was killed in action 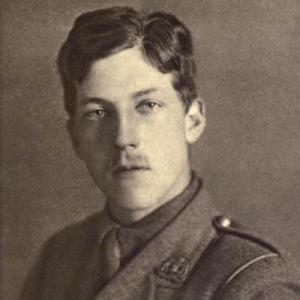