This wonderful Revolutionary tour of Paris and Versailles is mostly enjoyed on foot and by metro. And whilst many of the locations will be familiar to you, many of the events and stories associated with them may not be: what took place at the Champ de Mars, Jardin des Tuileries and the Palais Royal to name but a few, may permanently change your understanding of Paris. We will visit magnificent buildings such as Notre Dame, the Pantheon and Versailles to reveal a sinister side to their history; discover cafes whose cellars housed revolutionary tribunals; dine where the many of the era’s luminaries and sans-culottes ate; explore some of Paris’s seemingly innocent narrow streets to reveal their dark past. Paris is a must see for any traveller, a centre of art, fashion, romance and gastronomy, there’s no better way to enjoy it than a long weekend exploring its most important historical period.

Little did the people of Paris realise what they were unleashing when they stormed the hated royal symbol of the Bastille on 14th July 1789. The result was the creation of a new political order with marked ideological discontinuity and a process of irreversible socio-economic change. During the next four years Parisians would witness regicide, the creation of a republic, a major European war, a reign of terror and civil war. The French Revolution showed that no monarchy or central power was safe against the masses and it reshaped political thinking and European history from that point on. Paris, not for the first time and certainly not for the last, was the centre of the world.

Day 1 - Bastille. Morning departure with Eurostar from London St Pancras to Paris Gare du Nord. Visit Musée Carnavalet with its diorama of the Bastille and its extensive collection of revolutionary artefacts. Walk through the Marais with its extant pre-revolutionary streets and visit the very limited remains of the Bastille. Check-in to our hotel for 3 nights.

Day 2 - Versailles. Travel to Versailles for a guided tour of the staterooms of Louis XVI and Marie Antoinette in the Grand Palace. During an afternoon stroll around the town we visit the Royal Tennis Court where the famous oath was taken, see the hotel des Menus Plaisirs, which housed the Estates General and visit other significant revolutionary sites. This evening we dine with the sans-culottes in the Faubourg Saint-Antoine, a former hot-bed of revolutionary fervour.

Day 3 - Off with their heads! A walking tour in central Paris. Starting at the Temple of Reason on the Ile de Cité we visit the prison cells which held, amongst others Danton, Robespierre and Marie Antoinette prior to their execution at La Conciergerie. We discuss the fates of Lafayette, Robespierre and Bailly at the Hotel de Ville. Thence by Metro to the Palais Royal, St Roch, the Tuileries and the Place de la Concorde where Louis XVI and many luminaries of the revolution faced the guillotine. This evening we dine at the famous Le Procope restaurant, frequented in the past by such notables as Voltaire, Danton, Robespierre and even a young Napoleon. And then as dark falls perhaps you might enjoy a digestif amongst the ghosts of the revolutionary tribunals in the cellars of the Left Bank.

Day 4 - Rest in Peace. From the bloody Place de la Nation we walk to the small but poignant Picpus cemetery which contains mass graves of those guillotined. At the Pantheon we visit the tombs of Rousseau and Voltaire and discuss the controversial use of this former ecclesiastical building by successive French regimes. After lunch we catch our return Eurostar from Paris to London St Pancras. 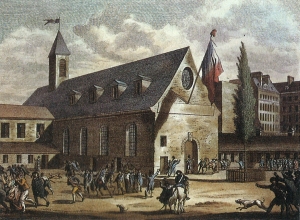 Prisoners at their tribunal 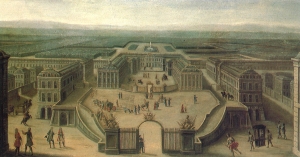 Versailles in the 18th Century 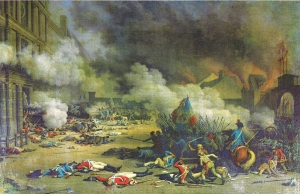 Attack on the Tuileries 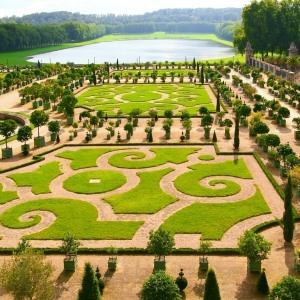