Our tour seeks to explain how and why such powerful and everlasting music emerged from the very bowels of the struggling black communities amidst the heat and oppression of the Delta’s cotton rich plantations. We trace the path of the early pioneers to see how they influenced and nurtured future luminaries who went on to inspire many icons of our current music industry, including Muddy Waters, Howling Wolf, John Lee Hooker and Elvis Presley. To this day Clarksdale and Memphis offer vibrant and historically rich hubs providing an ideal base for this exploratory investigation into the very land where the blues began: the Mississippi Delta.

But this tour is so much more than the history of Blues and the Delta: live and recorded music features regularly throughout the itinerary. We attend the two main days of ‘The King Biscuit Blues Festival’ which attracts musicians from all over the world to the banks of the Mississippi River in Helena, Arkansas. Featuring blues legends and up-and-coming acts, this iconic festival preserves and promotes the music of the Delta. And Bluesman Kevin Brown, with recordings and guitar in hand, accompanies us throughout. A veteran player of many of Mississippi’s Blues Juke Joints and respected within the music industry, Kevin is, according to Mark Knopfler, “so much more than just a great slide player”. He isn’t just a disciple of the heritage of Delta Blues, Kevin is part of it.
Find out more about Kevin and listen to some of his music at http://www.mykevinbrown.com/

For the average African-American, 19th century life in the Mississippi Delta, was disenfranchising and full of adversity: overcoming slavery, civil war, poverty and racism were just a few of the challenges faced. It is not surprising, therefore, that a visceral, emotional music with lyrics dealing with misfortune, betrayal and regret found its routes amidst the cotton fields, gins, factories and townships of the Deep South. The story of the Blues is inextricably linked with the struggle for Civil Rights and none more so than in Greenwood, where the lynching of 14 year-old Emmett Till in 1955 drew worldwide attention to racism in the Southern States whilst Clarksdale was at the fore of civil rights activities under the leadership of Aaron ‘Doc’ Henry.

Transfer to our Clarksdale hotel for 6 nights.

A relaxed introduction to the town as we take a walk through the cotton fields where mechanization was pioneered all the way to downtown Clarksdale passing the places that reflect the town’s fascinating music and civil rights history: New World, Haven Church, Aaron ‘Doc’ Henry’s drug store, the county jail and more. After exploring the historic town sign trail, we end up at the fabulous Delta Blues Museum with its collection of Guitar Greats’ instruments, recordings and memorabilia.

Day 3 - The Birth of the Blues

At Tutwiler Railway station we stand at where a mesmerised WC Handy heard and documented the first strains of what we know today as the Blues. We immerse ourselves in the era of the early Blues amidst the lovingly restored buildings at the influential Dockery Farms plantation from where a wealth of early talent was to emerge. At Indianola we explore the inspiring B B King Museum, watch and listen to the great man in its outstanding theatre and visit Club Ebony which hosted many an aspiring player. Thence to Cleveland, to discuss how a local three-piece band provided “the enlightenment of W C Handy” and to engage with the interactive exhibits at the Recording Academy’s Grammy Museum. We head back up Highway 61 to Clarksdale where we spend the evening in one or two of its many ‘juke joints’.

Day 4 - Robert Johnson and Emmitt Till

We head for Johnson’s hometown of Greenwood to explore his life, visiting the Baptist Town, ‘Back in the Day’ Museum, the back alleys in which he played and pay our respects to the great man at his graveside. This afternoon we visit Bryant’s Grocery store in the little town of Money, where a young Emmett Till gave ‘offence’ that would result in his lynching and ignite the early civil rights movement. Till’s story is interpreted at the cotton gin ETHIC centre in Glendora and, at Sumner courthouse, we discuss the travesty of justice that resulted in his murderers being acquitted. Returning to Clarksdale, we find the ‘crossroads’ where, allegedly, Robert Johnson made his deal with the Devil. This evening we dine at Ground Zero, the legendary live music venue and eatery established by Morgan Freeman.

We make a swift visit to Friars Point where a young Muddy Waters was inspired by Robert Johnson playing outside the drugstore and we catch a glimpse of the Mississippi embankments which inspired Led Zeppelin’s ‘When the levee breaks’. We continue to Helena, crossing the Mississippi River, to enjoy the King Biscuit Festival for the rest of the day/evening. Return to our hotel.

This morning we head for Tunica to visit the ‘Gateway to the Blues’ prior to our second day/evening at the King Biscuit Blues Festival. Return to our hotel.

We bid farewell to Clarksdale and travel to Memphis to visit Al Green’s Full Gospel Tabernacle Church where we enjoy a Gospel service and tour of the church. After checking in to our hotel we head for lively Beale Street, officially designated the ‘The Home of Blues’ by Congress, and stroll down the neon row, music spilling out of the bars and clubs, to watch the street performers, follow the brass notes and listen to the impromptu players in the W C Handy Park. This evening we will dine at one of Beale Street’s many atmospheric restaurants.

At the Mason Temple we hear a rendition of Martin Luther King Jr’s final ‘Mountaintop’ speech before visiting the Loraine Motel where he was assassinated the following day: today it houses the National Civil Rights Museum. Across the road we find the Blues Hall of Fame with its exposé of all that is blues culture before visiting renowned Sun Studio, the ‘birthplace of rock ‘n’ roll’, where countless musicians commenced their recording careers.

Drive out to Tupelo, where Elvis Presley grew up, to visit his first home, the dedicated museum and family church. Return to Memphis to explore Graceland, the private retreat of ‘The King of Rock ‘n’ Roll’, where we will enjoy a VIP tour that includes his mansion, his private jets, cars and the entertainment and exhibition complex. This evening we return to Beale Street for our final taste of the blues and dinner at the at B.B. Kings Blues Club. 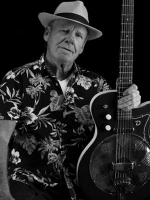 Your guide, Kevin Brown in action Lyndon B. Johnson signs the Civil Rights Act of 1964