This is a wonderful opportunity to enjoy a tour of the Loire and Pas-de-Calais in May, when the rolling countryside and imposing Gothic architecture are at their picturesque best. The late Spring sunshine allows us to combine this battlefield and cultural tour with pleasant countryside strolls, surrounded by flora and fauna and conjuring images of armour glinting in the sunlight. Travel is mainly by coach and rail where you will enjoy comfortable Standard Premier class with Eurostar and first class TGV in France. We stay in a variety of small medieval towns and cities where we wander along cobbled streets and through open market squares to enjoy wonderful food and wine in local restaurants.

The tour will be led jointly by Major Gordon Corrigan, well-known TV personality, military historian and author of the highly respected ‘A Great and Glorious Adventure – A Military History of the Hundred Years War’, and Imogen Corrigan, leading expert and lecturer in Anglo-Saxon and Medieval History.

The English claim to the French throne as the birth-right of King Edward III of England, the closest male relative to the last of the Capetian Kings of France, began the Hundred Years War which precipitated a revolution in military affairs. This allowed small English armies to defeat far larger French forces, and laid the foundation of a British way of waging war, which continued to Waterloo and beyond. In this tour we will examine how the English feudal array of mounted knights backed by a poorly armed and trained militia was transformed into a professional army of career soldiers fighting on foot, supported by the English weapon of mass destruction – the longbow.

Much myth and legend surrounds the Hundred Years War, particularly concerning Joan of Arc: contrary to popular belief she was not a poor peasant girl but the daughter of a local government official and she had a good basic education. Whether her voices came from God, as she alleged, whether she invented them or whether they indicated some form of insanity is still debated – and will be by us. Whatever the truth she was certainly an inspiration for a resurgence of French zeal before being betrayed, put on trial, and burnt at the stake in Rouen.

Our morning Eurostar departure from London St Pancras will whisk us quickly and smoothly to Lille. Picking up our coach, we drive to the battlefield of Crécy where, in 1346, King Edward III, faced by a far larger French army, took up a defensive position, waited for the French heavy cavalry to attack and then slaughtered them with a shower arrows that ‘turned the sky black’. Check in to our hotel in Montreuil sur Mer for one night.

This morning we tour the battlefield at Agincourt, where Henry V of England with a tiny, hungry and bedraggled army, utterly defeated a far larger French force. Later we travel to Amiens where we inspect the iconography of the Cathedral, built during the war and well known to the combatants on both sides. Continue to Rouen where we check in to our hotel for two nights.

Today we spend a full day in Rouen, the location of the main French shipyards during the war, which was besieged by Henry V in 1418/19. It was here that Joan of Arc was tried for heresy and burned at the stake in 1431. We will visit the modern church which was erected as a memorial, the Joan of Arc interpretation centre and the nearby wonderful Gothic cathedral, which houses the tomb of the heart of Richard the Lionheart.

We take a long scenic drive to Orleans, a city besieged by the English and Burgundians in 1428/29 and supposedly relieved by Joan of Arc, hence one of her many soubriquets ‘The Maid of Orleans’. Check in to our hotel in Beaugency for two nights.

Day 5 - The Loire Valley and Patay

We visit the Abbaye de Fleury, originally founded in 640 and well known to both sides in the war, and the Chateau de Sully, a typical fortified keep built in the late 1300s to defend the crossing of the River Loire. We will also inspect the location of the Battle of Patay, 14 June 1429, one of the few battles that the English, including a contingent led by Sir John Fastolf (the inspiration for Shakespeare’s Falstaff) lost, not as claimed by the French because of Joan of Arc, but because of the English commander’s over-confidence.

An early start sees us head to Poitiers, where Joan of Arc’s claim to divine guidance was examined, and tour Poitiers Cathedral with its 12th Century stained glass windows and modern memorial to Joan. We examine the Battle of Poitiers where ten years after Crécy, on 19 September 1356, the Black Prince, son of Edward III, campaigning from English Bordeaux to Calais, was attacked by a French army south of Poitiers. The French had learned something from Crécy and they attacked dismounted, but to no avail. Once more the professional English archers turn the French advance into a rout, taking the French king prisoner. Check in to our hotel for one night.

This morning we take the TGV to Bordeaux, capital of English Aquitaine and examine the Battle of Castillon, the last major battle of the war, where French developments in artillery defeated the English who had just recaptured Bordeaux. Check in to our hotel in Bordeaux for one night.

Return flight from Bordeaux to London.

This tour can be joined within France. Please contact us for more details. 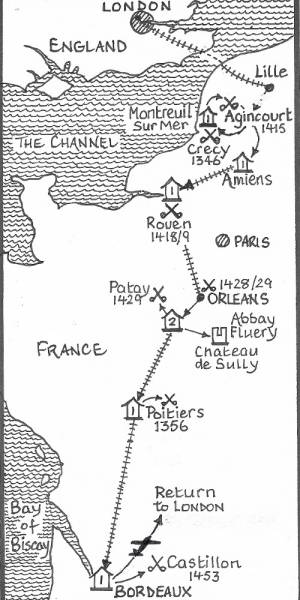 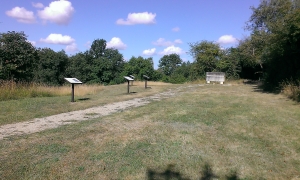 Poitiers from the Engllish Left Flank 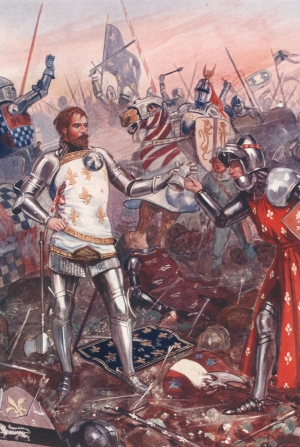 Poitiers - Surrender of King John I 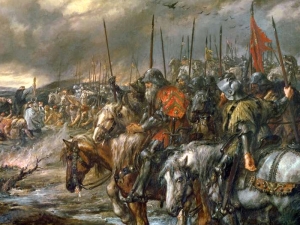 Morning Of The Battle Of Agincourt, 25th October 1415