Travelling and walking through some of the finest English landscapes, we will try to understand how Anglo-Saxon kingship worked during this crucial period in English history as the most famous son of Wessex, Alfred the Great, fought for survival against his Viking enemies. Examining the remains of ancient fortifications and taking the high ground as we search for likely battlefields, the tour allows us to explore the reality behind Bernard Cornwell’s popular novels, The Last Kingdom and The Pale Horseman, as Alfred moved from near total defeat to crucial victory. Situated in the heart of historic Wessex, we will enjoy stunning scenery, a series of short walks and one or two country pub sandwich lunches.

Our expert historian will be Dr Ryan Lavelle, author of a range of publications on the lands and politics of the Anglo-Saxon kingdoms, including Alfred’s Wars (2010). He was also historical adviser on the BBC TV adaptation The Last Kingdom.

Alfred of Wessex (871–99) is renowned as one of the great kings of medieval English history and is the only English king to be remembered as ‘the Great’. A major part of this reputation is built on his military leadership of the West Saxon kingdom, the last of the Anglo-Saxon kingdoms to survive the Viking onslaught of the ninth century. The youngest of five brothers to rule Wessex in turbulent times, Alfred’s accession to the throne of Wessex in 871 took place in a ‘year of battles’, the most important of which was the Battle of Ashdown, when the young prince proved his mettle against his enemies. A series of treaties with the Vikings bought time for the West Saxons but, after a surprise attack in the winter of 878, the king took refuge and finally rallied his forces to victory at the Battle of Ethandun. The peace treaty which resulted allowed the king to build a series of fortifications throughout his kingdom, which provided the heartland of the West Saxon kingdom with the strength it needed to withstand future Viking attacks.

Day 1 – Winchester.
We meet at midday to enjoy a sandwich lunch at our hotel in Winchester, the city most often associated with the memory of Alfred the Great and our home throughout the tour. Visiting Anglo-Saxon collections in the Winchester City Museum, we explore the layout of the old Roman city as it was converted to the master plan of a West Saxon burh. We begin our evening with welcome drinks, followed by dinner with an introductory talk.

Day 2 - Wantage to Wallingford.
We start the day at Wantage, now in Oxfordshire, Alfred’s birthplace, on the northern edge of the West Saxon kingdom. A short drive to the Ridgeway, one of the most important routes across northern Wessex, helps us to understand how the king’s childhood home became threatened by Viking forces. We take a gentle walk along this ancient route (4 kms) to examine locations associated with the battle of Ashdown (871) and enjoy a sweeping panorama of the Anglo-Saxon landscape fought over between West Saxons and Danes. Thence to Wallingford, to examine a second Alfredian burh site before visiting a second, and perhaps, more convincing site for the battle of Ashdown overlooking the Thames Valley.

Day 3 - From exile in the Somerset Levels to Victory at Ethandun.
The drama of Alfred’s story really comes alive when we travel to the area overlooking Selwood, where the three shires of Somerset, Wiltshire and Dorset meet and ‘Ecgberht’s Stone’ was once used to assemble the forces of Wessex. We ascend the eighteenth-century ‘Alfred’s Tower’, overlooking this ancient landscape, and then continue to the ancient Bratton Camp with its White Horse and stunning views, near the small Wiltshire village of Edington, to discuss the most likely site of the bloody battle of Ethandun, which saw Alfred’s 878 victory. We continue west to where Alfred was forced into exile into the Somerset Levels. A visit to the refuge upon raised ground at Athelney, ‘the Princes’ Isle’, helps us to understand how, surrounded by marshes, the king was able to hold this last western toe-hold of his embattled kingdom. Continue to Dorchester where we spend our final night.

Day 4 – Wareham, Shaftesbury and Salisbury.
Drive to the Dorset town of Wareham, where Vikings used subterfuge to escape the West Saxons in 876. Thence to the Iron Age fort at Badbury Rings occupied by Alfred’s son, Edward the Elder, in 899 as he opposed the revolt of Aethelwold following his father’s death. We explore the remains of Shaftesbury Abbey, built by Alfred around 888, see its fine modern statue, visit the museum with its Saxon exhibits and enjoy stunning views over the Blackmore Vale. Our final call is to Old Sarum, used just over a century later during the disastrous reign of Alfred’s great- great-grandson, Æthelred ‘the Unready’ (978–1016). Standing atop its ramparts will help us to understand the tragic epilogue to Alfred’s story as the attacks on southern England took their toll during the ‘Second Viking Age’ and the English kingdom finally fell to a Danish King, Cnut, in 1016. Return to Winchester for a late-afternoon dispersal. 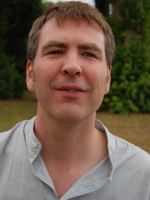 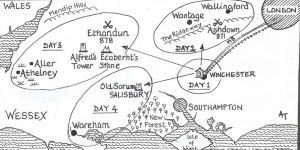 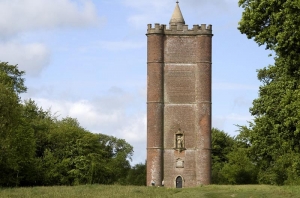 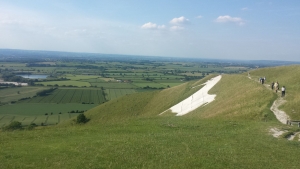 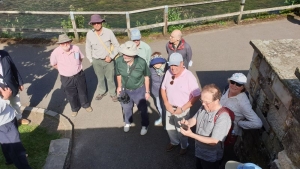 At the only known section of Winchester's Roman wall 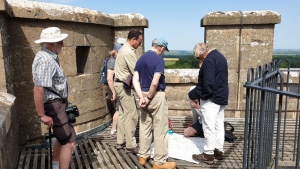 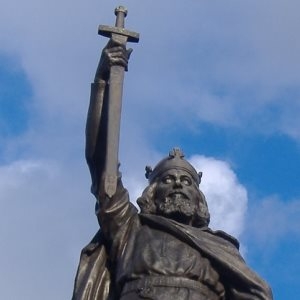