Based in the beautiful city of Madrid with its uniquely rich historical and cultural background, our six-day tour focuses on the battles that took place on its periphery, in particular the exploits of the British and American volunteers, as the Republicans tenaciously held on to the capital city throughout the war. At Franco’s final resting place at the Valle de los Caidos we discuss the war’s legacy to modern Spain; explore the abandoned bunkers high on the Alto del Leon; enjoy stunning vistas from atop the Guadarrama Pass; wander the narrow streets of medieval Toledo; admire civil war inspired art such as Picasso’s cubist painting ‘Guernica’; and stand with British and Lincoln battalions at the Jarama. At the end of the day we will sample some fine Spanish cuisine at several nearby restaurants, perhaps partaking in a glass of rioja or two over a discourse of the day’s memorable events.

The Spanish Civil War was a particularly bloody conflict that led to the deaths of half a million people, and over 30 years of a dictatorship under Franco, the social and political impact of which is still being felt in Spain today. Starting as what was seen as a purely internal affair, the conflict soon became used by some countries as a ‘dress rehearsal’ for the Second World War. Commentators have gone so far as to say the Second World War started in 1936 not 1939.

Yet at the time that was not the prevailing attitude amongst the majority. This view is typical of many governments of the day: “With France and Spain menaced by Bolshevism, it is not inconceivable that before long it may pay us to throw in our lot with Germany and Italy, and the greater our detachment from European entanglements the better.” Sir Maurice Hankey, Cabinet Secretary, 20 June 1936

The non interventionist policy towards Spain, which this kind of thinking produced, was adopted by most western governments (apart from Italy, Germany, and Russia), yet in spite of that some 40,000 individuals from around 50 countries volunteered to fight in Spain on the Republican side, and 1,500 foreign nationals, mainly from Britain, Ireland, and Portugal, volunteered to fight for the Nationalists (alongside the very sizeable military contingents from Nazi Germany and Italy). Amongst their ranks were left wing writers such as George Orwell and John Cornford, Winston Churchill’s anti-fascist nephews Giles and Esmond Romilly, and passionate anti-communists like Peter Kemp. Why did they feel so passionately that they left their homelands, many from countries thousands of miles away, to go and fight in a foreign land?

"Ray's combinations of enthusiasm and knowledge for the subject was perfect - a great privilege for us all."

Fly London to Madrid. Visit the battlefield of Guadalajara, where on March 1937 the People's Republican Army defeated a combined force of Italian and Nationalist armour and motorised infantry attempting to encircle Madrid. Continue to Madrid and check-in to our hotel for five nights.

Puerto de Guaderrama Mountains, the scene of much fighting in the very early days of the war when the Nationalists forced the pass across the mountains but failed to get any further. Then travel to the imposing historical residence (El Escorial) of the King of Spain built at the instigation of King Philip II, in 1563. Afterwards visit the Valle de los Caidos (the Valley of the Fallen) built by General Francisco Franco to commemorate the dead of both sides.

Tour the famed Alcazar in Toledo, the well-preserved site of the famous siege and now symbol of Spanish nationalism, where Colonel Jose Moscardo Ituarte and his Nationalist Guarda Civil held out against vastly superior numbers of Republican militia despite the capture and subsequent shooting of his son. Visit the Spanish Army Museum and explore the town. Afterwards return to Madrid to view Nationalist positions on the Casa de Campo from which they launched their main assault on the City.

In the morning we visit the Reina Sofia Museum of modern art in which Picasso’s famous painting, Guernica, is exhibited. After lunch we visit Ciudad Universitaria (where much of the hard fighting during November 1936 took place) and the Parque del Oeste (Western Park).

Visit the memorial to the International Brigades at Jarama and walk the ground that the British Battalion, under Captain Tom Wintringham, (and later the Lincoln Battalion – their US counterparts), fought over for three dreadful days in February 1937. Peruse the privately-owned museum of the Battle of Jarama at Morata de Tajuna. Return to Madrid to visit the Temple of Debod, one of the few examples of ancient Egyptian architecture outside of Egypt and the only one in Spain.

Travel to the site of one of the biggest battles on Spanish soil where the British Battalion fought, as part of the 80,000 strong Republican army, attempting to relieve the pressure on Madrid in July 1937. After lunch in the rebuilt town of Brunete return to the airport for our early evening flight home. 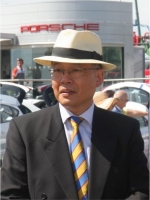 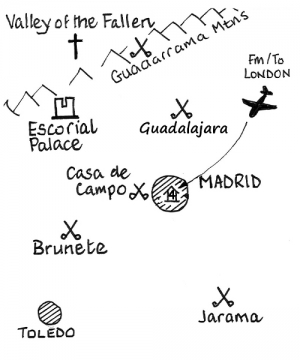 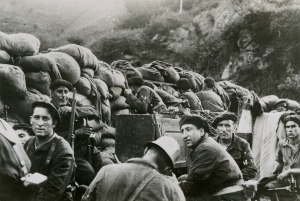 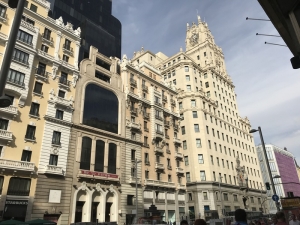 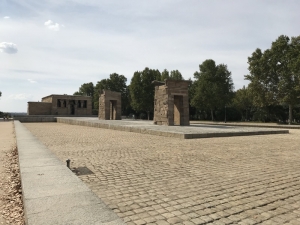 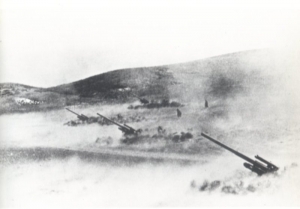 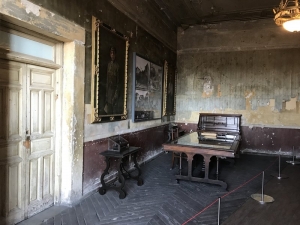