Tunisia is a country steeped in Ancient and Modern History, the sites spanning centuries of archaeological and military importance. Immerse yourself in the art and images of cultures long since passed and explore the melting pot of influences on this diverse and intriguing country. In the company of Military History Monthly editor and archaeologist Dr Neil Faulkner, traverse the richest parts of Tunisia’s history: the Roman occupation and the fierce fighting between the Allied and Axis forces during the Second World War. Discover the history of Carthage, walk through the ancient cities of Dougga and Sbeitla and marvel at the largest surviving amphitheatre in Africa. Follow in the footsteps of the 1st Army through the beautiful but blood soaked Madjerda Valley, stop at the damaged village of Takrouna, left as a stark reminder of the heroics and cost of war and visit the site of von Arnim’s momentous surrender of the Afrika Korps in 1943.

Caught between the clashing influences of Africa and Europe, Tunisia has been a meeting point of cultures throughout history, with a geography as varied as its culture. From the Numidian tribes in 3000BC to the Tunisian Revolution in December 2010, sparking the so called ‘Arab Spring’, Tunisia is a treasure trove of ruins, ancient cities, architecture and artefacts. The country has seen times of extreme prosperity and decline under Phoenician and Roman rule, and the Arab Muslim Conquest, changing the language, customs and architectural landscape of the country from towering, clean cut pillars to the beautiful and imposing domed grand mosques found in every city. The strategic location of Tunisia has been exploited for centuries. It was a base for piratic raids on European shipping under the Ottoman Empire as the Axis Powers’ foothold in North Africa during WW2 until 1943, when they were overwhelmed by the superior numbers and tactics of the Allied Forces. Since independence from France in 1956, Tunisia has been lauded as the most democratic country in Africa, but it has still experienced exciting political change and unrest.

Fly London – Tunis and check-in to our hotel for two nights.

We explore the ancient and bloody history of Carthage, steeped in former grandeur and beauty. Clamber over the sprawling ruins of the town hall, the majestic amphitheatre and the Antonin baths, caught between the bustle of the modern city and the glimmering blue Mediterranean Sea. Fast forward two millennia with a visit to the American War Cemetery to pay our respects to those who lost their lives on the battlefields that we will discover throughout the tour. We end the day exploring Tunis itself, including the stunning 9th century medina, the soothing Zitouna Mosque and the ancient, transporting entrance to the medina, the Bab El Bhar.

We explore the hilltop village of Takrouna, bitterly fought over the by New Zealand forces and a standing monument to the devastation of the war in North Africa. We stop at Sainte Marie du Zit, the small, agricultural settlement where von Arnim was driven to surrender the Afrika Korps to the Allied Forces in 1943. This afternoon we visit the Sousse Archaeological Museum with its vibrant mosaics and curious artefacts, including the morbid, but fascinating funerary collection and the famous ‘drunken women’ terracotta figurines. Continue to our hotel in Kairouan for two nights.

We enjoy a guided tour of the white washed streets of this ancient holy Muslim capital, itself a UNESCO World Heritage Site, and see the trend-setting Great Mosque, boasting the oldest minaret in the Muslim West. Take in the enormity of the changes wrought by the Arab Conquest from their cultural and spiritual seat of power before traveling to the colossal Amphitheatre of El Jem to witness one of the most iconic images of the Roman Empire and way of life that was overrun and forgotten to time. We walk around this monument of extreme violence, death and delight before returning to Kairouan for the second of two nights.

We explore the Museum of Islamic Art, set in an old presidential palace whose treasures record the biggest cultural change in the history of Tunisia. We will admire the scale model of the Great Mosque minaret, the spectacular ceramics and elegant, elaborate stained glass windows, offering a kaleidoscope view across the park. Thence to the crumbling remains of Roman Mustis, built on land gifted to Roman army veterans and soldiers for their service. After exploring the foundations of the villas, churches and forum of this simple community, we continue to Dougga and our hotel for the next two nights.

Spend the day at the breathtaking ruins of Dougga, one of the most well-known, well preserved and enthralling Roman archaeological sites in Africa. The UNCESCO World Heritage site sits proudly on a hillside, offering spectacular views and enticing visitors to enter its baths, villas and amphitheatres as well as ramble through its ancient streets and alley ways. Throughout the day we will discover what life was like in this arid landscape and how the Romans adapted and made their mark on the landscape as well as on Tunisia’s complex and fluid identity.

We follow the 1st Army’s run for Tunis through the spectacular Madjerda Valley. Explore the eclectic architecture of Beja before enjoying a scenic trip through the verdant, undulating valley in the foothills of the Aurès Mountains. We will stop at the desolate Oued Zarga War Cemetery with the turquoise, mirage-like lake offering a bleak backdrop to this poignant final resting place. Finally, admire the sweeping views after a walk to the top of the infamous Longstop Hill to discuss the first epic tank v tank battles at one of the last Axis defence lines before Tunis. 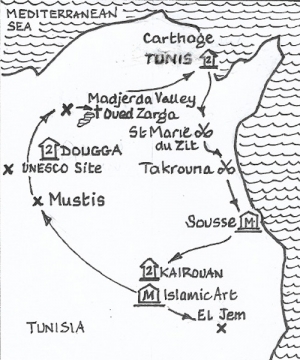 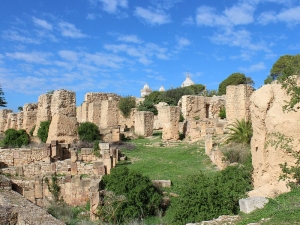 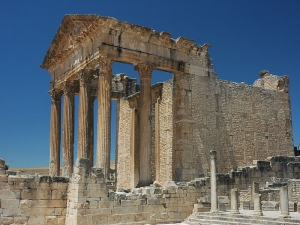 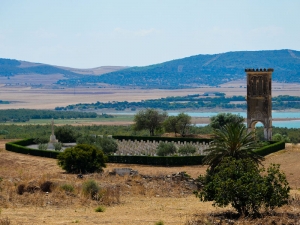 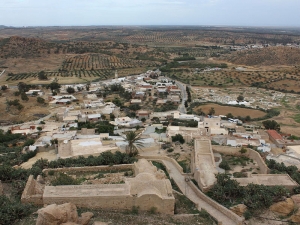