Appealing to history and culture enthusiasts alike, this tour combines the key locations of the Vietnam war, with the stunning highlights of that country. Vietnam offers a rich culture and history, combined with delicious local cuisine with a French twist. Hanoi, with its leafy tree lined avenues, plays host to fascinating, thought provoking museums and military sites. Further north we explore the battlefield of Dien Bien Phu, which signalled the end of French Colonial rule and savour the breathtaking vistas of Ha Long Bay. We continue our journey south to the former DMZ, visiting the Citadel in Hue where some of the fiercest fighting took place during the 1968 Tet Offensive. Enjoy some ‘R&R’ at China beach, cruise the Mekong Delta in the wake of the U.S. Brown Water Navy and explore the incredible Cu Chi tunnels, all in the company of our expert historian. Finally, relax with a drink in the rooftop bar at the Rex Hotel in Saigon, famous hangout of war correspondents and senior US military officials.

The tour is led by leading Vietnam War historian and author Dr Gregory Daddis, described as the expert’s expert on the Vietnam War, a retired US Army Colonel who served in both Operation Desert Storm and Iraqi Freedom and is a former Chief of the American History Division at USMA West Point.

On the 7th of May 1954, the Viet Minh were victorious at the battle of Dien Bien Phu, thus ending French involvement in Indochina. The ensuing Geneva Conference in November of that year divided the country in two along the 17th parallel. North Vietnam continued the fight as an extension of their desire for independence against colonial rule, supported by China and the Soviet Union. The United States and her allies, who feared the rise of communism in Southeast Asia, sided with the South and thus ushered in a new war. American involvement began in earnest in the spring of 1965 when 3,500 US Marines landed near Da Nang; the number of US ground troops then rose rapidly to 200,000 by December of the same year. By this time the North Vietnamese Army and insurgent National Liberation Front (otherwise known as the Viet Cong) controlled large portions of the rural South. The Tet Offensive of 1968 saw the beginnings of a shift to fighting in more urban areas, with the major cities of Hue and Saigon enduring fierce fighting with regiment sized forces opposing each other. Urban areas increasingly became the focus of later operations conducted by the North, such as the Easter Offensive of 1972 and their final Spring Offensive of 1975. Numerous atrocities were committed by both sides, including the use of chemical and biological weapons such as Napalm and Agent Orange. By the end of the war on 30th April 1975, more than 58,000 Americans and an estimated 1.5 million Vietnamese soldiers and civilians had lost their lives.

Fly overnight from London to Hanoi.

On arrival transfer to your hotel for early check-in and breakfast. This afternoon we visit the fascinating Ho Chi Minh Trail Museum dedicated to the system of trails, displaying American weaponry and thought-provoking photographic displays.

Today we begin with a visit to the Ho Chi Minh Complex, comprising the imposing marble Mausoleum, the Presidential Palace, Ho Chi Minh’s wooden stilt house and the nearby One Pillar Pagoda. After lunch we continue to the Vietnam Military History Museum, housing an interesting collection documenting the period between 1954 and 1975, including aircraft along with French, American, Chinese and Soviet military equipment. We visit the small museum at Hỏa Lò Prison, better known as the Hanoi Hilton, before exploring the bunker of the General Command Headquarters.

Transfer to Hanoi airport for your flight to Dien Bien Phu. Visit the Victory Monument for an orientation of the battlefield and visit the battlefield museum which houses an eclectic collection commemorating the 1954 battle, including photographs, weaponry, the bath-tub of General de Castries and a bicycle that could carry 330kg of ordnance. Our exploration ends at the Viet Minh cemetery from where we watch the sunset. Check in to our hotel for 2 nights.

Enjoy a full day exploring the well-preserved battle site of Dien Bien Phu, starting at the Muong Phang tunnels and bunker system of the Viet Minh commander General Vo Nguyen Giap. This afternoon we visit the amazing and extensive recreated French trench and bunker systems atop the three hills of the Beatrice position and climb Hill A1 (Eliane 2) to witness the last stand of the French and the huge mine crater thereon.

We see the site of the French surrender at General de Castries bunker, visit the French cemetery, cross the extant French-laid Bailey Bridge and climb up the Anne-Marie defensive position. We return to the hotel for lunch before transferring to the airport for our return flight to Hanoi.

After breakfast we drive to Ha Long bay, a UNESCO World Natural Heritage Site recognised for its biodiversity and geology. The stunning scenic rock formations of 1,969 limestone islands, set in emerald water, jutting imposingly skywards, is a must do when visiting Vietnam. Join our traditionally styled luxury junk for an overnight cruise. Once onboard, enjoy lunch while you set sail into the myriad of islands, visit Thien Canh Son cave, go Kayaking or simply relax onboard and enjoy the constantly changing scenery. Dinner and overnight onboard.

Enjoy the morning cruising through the bay and explore an island. After lunch disembark and transfer back to Hanoi Airport for your flight to the old imperial city of Hue, check in to our hotel for a 2-night stay.

An early start for a full day tour of the DMZ. We drive to Quang Tri Province and visit the former Marine base at Khe San, where one of the longest and deadliest battles of the Vietnam War was fought. Travelling on Road 9, originally part of the Ho Chi Minh Trail linking the DMZ to the neighbouring Laos, we see historic war sites such as The Rockpile and Ta Con Airfield. We cross from ‘South’ Vietnam to the ‘North’ walking over the Hien Luong Bridge. A visit to the Vinh Moc tunnel complex offers an authentic insight into the life of the Viet Cong, and villagers of Vinh Linh.

This morning we explore Hue Citadel, focusing on the fighting that took place here during the 1968 Tet Offensive. 11 battalions of the Army of the Republic of South Vietnam (ARVN), 4 US Army battalions and 3 US Marine Corps battalions fought a vicious house to house battle with 10 battalions of the People’s Army of Vietnam and Viet Cong. In the afternoon we drive via Red Beach 2, where the US Marines first landed, to China Beach on the outskirts of Danang where we check-in to our hotel for one night and enjoy some R&R in the same vicinity of the US troops.

Fly Danang to Saigon (Ho Chi Minh City) and then drive to the incredible Cu Chi tunnel complex north of Saigon, an immense network of connecting tunnels used by Viet Cong troops. As well as being used in combat, they also served as communication and supply routes, hospitals, food and weapons caches, and living quarters. Explore inside the tunnels and imagine the conditions faced by both sides; tunnels were often booby trapped and examples of traps used are on display.

This morning we drive to the little changed battlefield of Ap Bac, a pivotal battle of the Vietnam War and a potent for the eventual failure in South Vietnam. Thence to My Tho, a centre of operations for US and Australian troops, to explore the Mekong Delta by boat to learn more about the US Brown Water Navy. This evening we enjoy dinner and drinks at the famous Rex Hotel, Saigon!

Discover the history of the Reunification Palace where, in 1975, a North Vietnamese Army tank crashed through the main gates, effectively ending the Vietnam war. We make a stop at the site of the US Embassy and visit the War Remnants Museum, containing exhibits from the French Indo-China War and the Vietnam war. Lunch will be followed by time to explore Ben Than market in central Saigon. Built in 1870, it is the largest market in the city and the most authentic. Evening transfer to the airport for our return overnight flight to London. 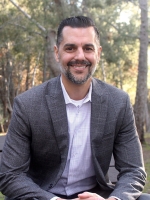 Gregory A. Daddis is a professor of history at San Diego State University and holds the USS Midway Chair in Modern US Military History. Daddis joined SDSU after directing the MA Program in War and Society Studies at Chapman University. Prior, he served as the Chief of the American History Division in the Department of History at the United States Military Academy at West Point. A retired US Army colonel, he deployed to both Operations Desert Storm and Iraqi Freedom. 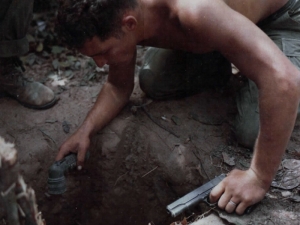 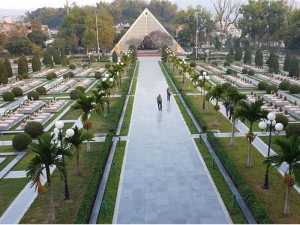 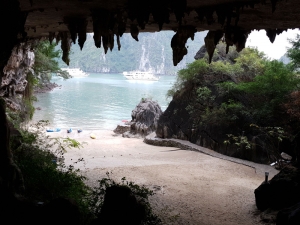 Looking out from Skall Cave 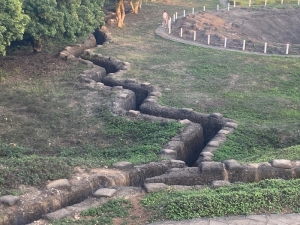 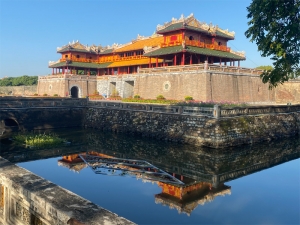 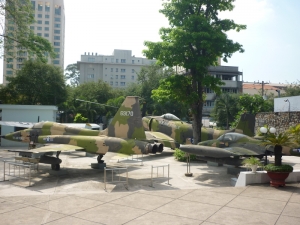 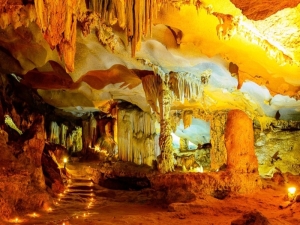 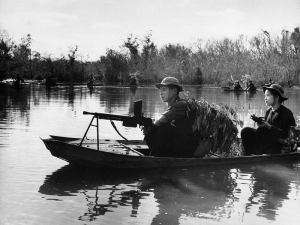 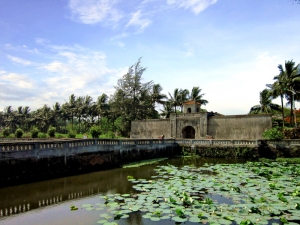 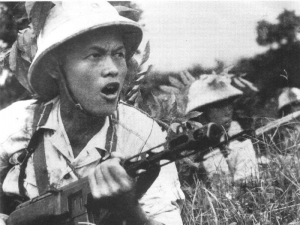 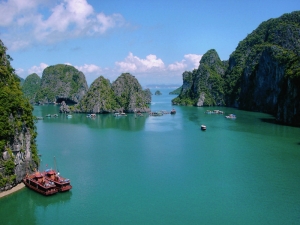 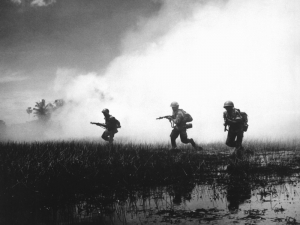 ARVN forces assault a stronghold in the Mekong Delta 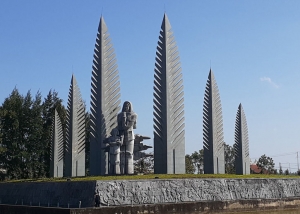 Sculpture on the south side of the DMZ bridge