Our Peninsular War tours cover some of the best open spaces in central Spain – landscapes and townscapes that are generally off the tourist trail and which have changed little in centuries. In spring and early summer the region is at its best: the weather is warm and the countryside is lush with green vegetation and spring flowers - perfect conditions for walking. This holiday is for those who want to combine a historical themed holiday with healthy exercise and the opportunity to explore the battlefields in more depth than is generally possible.

We have divided each day into a varying number of walks – giving us flexibility to adjust the programme to suit weather conditions, individual preferences and levels of fitness, - and to ensure we allow time for the meals you will have worked up an appetite for! We will be covering up to 8 miles on some days – albeit in bite-sized chunks – so you will need to be reasonably fit, but there is nothing here that a regular weekend walker could not cope with.

In 1808, the then Sir Arthur Wellesley (he didn’t become Wellington until after Talavera) landed with a small, untried British Army north of Lisbon in response to a request for military assistance from England’s oldest ally – Portugal – who had been invaded by French armies the previous year. In two brilliant actions at Rolica and Vimiero, Wellesley promptly defeated the French before being superseded by more senior officers. The following year he was back. Having found at Talavera (1809) that his Spanish allies were unreliable, he incorporated the more acquiescent Portuguese into what became a powerful Anglo-Portuguese Army and staged a set-piece defensive battle on the ridge at Bussaco (Sep 1810) to give his new Portuguese partners an opportunity to earn their spurs. Meanwhile Wellington’s famous Light Division had been defending the rugged mountains and river gorges on Portuguese border against French incursions until the secret defensive positions at Torres Vedras was completed by Wellington’s engineers. With his Anglo-Portuguese army now fully trained and equipped, Wellington sallied forth into Spain and defeated the French in a protracted battle around the frontier village of Fuentes de Onoro in 1811 and returning to capture the Spanish frontier fortresses of Ciudad Rodrigo and Badajos in early 1812. Having thus secured the ‘Keys to Spain’, Wellington marched deep into Spain and fought what is arguably his most brilliant action at Salamanca – a precursor to his victorious entry to the Spanish capital Madrid, where our tour ends.

Day 1 - Walking Obidos. We fly into Lisbon and drive north through the Lines of Torres Vedras to the exquisite medieval walled town of Obidos where we will take an evening walk around the town walls and see where the first shot of the Peninsular War was fired. Check-in to our historic hotel for one night.

Day 2 - Walking Rolica & Vimiero. We walk along the beach and coastal hills at Maciera Bay and visualise Wellington’s Army coming ashore through the Atlantic surf. We then enjoy two gentle ‘break-in’ walks around the battlefields of Rolica and nearby Vimiero respectively, taking time out for lunch and a visit to the Vimiero Visitor Centre in between. Drive on to Luso and check-in to our hotel for one night.

Day 3 - Walking Bussaco. Today we start our day surveying Wellington’s magnificent ridgeline defensive position from the French commander’s perspective at ‘Massena’s windmill’ before then following the route of the French army up onto the ridge itself. As we traverse the ridge, we will see where French troops momentarily occupied the ridge top before being thrown off by heroic British and Portuguese counter attacks, where Wellington established his command post, and ‘Craufurd’s windmill’ where the commander of the Light Division held the left flank against determined French attacks. It makes for a great walk with panoramic views over the beautiful Portuguese National Park as we progress. In the evening we drive to the perfectly-preserved hilltop ‘Fort Conception’ (now an hotel) sitting astride the Spanish Portuguese border. This was the Light Division’s headquarters for operations on the border and so it will be our base for the next two nights. Take an after-dinner stroll around the castle walls and hilltop.

Day 4 - Walking the Border. Strap on your marching boots for a day with the legendary Light Division! In the morning we climb down a mountain track into the dramatic River Agueda gorge to witness the scene of the Skirmish at Barba del Puerco where Light Division outposts fought off a determined French night attack. We quench our thirst over a delicious tapas lunch back at Fort Conception with panoramic views in every direction. On the afternoon’s walk we follow the route of the Light Division’s precipitous withdrawal from Almeida down an ancient track to the famous Coa Bridge where see how it was defended against almost impossible odds.

Day 5 - Walking Salamanca. Today the unspoiled battlefield of Salamanca provides a fabulous day’s walking with superb panoramas from every viewpoint. We can follow the march of both armies onto the battlefield and see where the first shots were fired, view the field from Wellington’s perspective and see the spot where he made his famous decision to attack. We can then climb up onto the ridge where Edward Pakenham’s division intercepted the head of the French columns and then follow the ridge back to see where Wellington successively – and successfully – committed his remaining divisions to the attack one by one. Finally we climb up onto the Greater Arapile for a grandstand view of the closing stages of the battle. We will aim to arrive at Salamanca in time to check-in to our centrally located hotel for a promenade of this beautiful cathedral and university city and this evening we will enjoy our final meal in the Plaza Mayor – one of the most splendid city squares in Europe.

Day 6 - Return. We drive over the Sierra de Guardarrama mountains to Madrid for our flight home, via a snack break and photo opportunity outside the spectacular walled city of Avila. 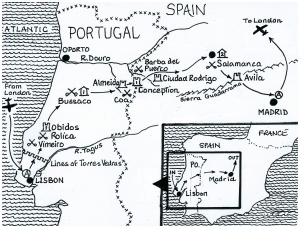 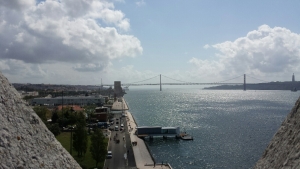 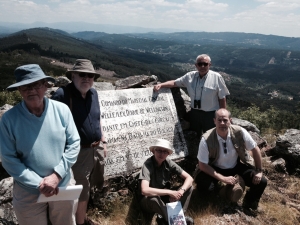 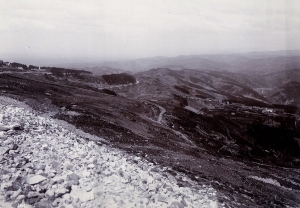 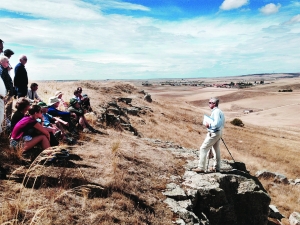 On the battlefield at Salamanca 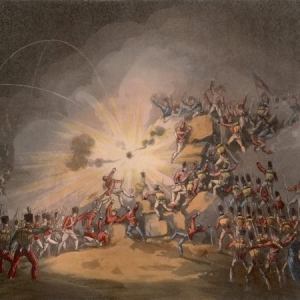