His System, Strategy and Tactics

His System, Strategy and Tactics

During this gently paced tour we examine the generalship of the Duke of Wellington in the company of leading Peninsular War historian and former soldier, Colonel Nick Lipscombe, whilst simultaneously enjoying magnificent Iberian scenery, fabulous architecture and striking wildlife. Visit the little changed battlefield of Vimeiro surrounded by its verdant hills and valleys; wander the narrow medieval streets and walls of Moorish Obidos; admire the stunning views from atop the Sierra de Busaco amidst its beautiful eponymous national park; stroll through granite walled villages and weathered outcrops on the Castilla y Leon plain, explore the wonderfully preserved Vauban-style fortified city of Ciudad Rodrigo; stroll through the World Heritage golden city of Salamanca with its twin cathedrals; discover the complete medieval crenelated walls and circular towers of Avila; unearth the treasures of Romanesque churches, a Gothic cathedral and the Disneyesque alcazar of Segovia; and ascend the mighty Pyrenees mountains on a cog-wheel railway to gaze over bucolic Aquitaine and its shimmering coastline.

Wellington was of the opinion that his hardest fought battle was Assaye in India but it was his dramatic victories achieved during the Peninsular War that built his international reputation as a great commander. At Vimeiro he first demonstrated his skill in defence by combining his fighting components, use of dead ground and clever manoeuvre to meet and repulse multiple French assaults. At Busaco he took a strong defensive position and improved its lateral communications to allow timely rapid movement to meet and repel successive attacks. He showed that he was not averse to taking risks at Fuentes de Onoro by fighting with his back to a deeply ravined river and offering an open flank. Often criticised for his defensive nature, at Salamanca the Duke seized the initiative driving his ‘Fighting’ Third Division forward and defeating “an army of 40,000 men in 40 minutes”, an achievement that one of his opponents that day said raised his “reputation almost to the level of Marlborough”. Whilst the campaign of Vitoria culminated in the complete rout of the French in Northern Spain, that success was in no small part due to the tremendous strategic risk taken in switching the Allied lines of communication from Portugal in the west to the recently liberated ports of northern Spain. But it was his planning and execution of the battle of the Nivelle that Wellington thought was his “best work”.

Fly from London Gatwick to Lisbon and drive to Vimeiro where we stand on the round hill and gaze across the fertile rolling ground over which Wellington’s men fought in August 1808. Continue to Obidos for one night where we will explore its cobbled streets and ascend its walls.

The ancient walled arboretum that stretches below and along the ridge defended by Wellington in 1810 creates a pretty backdrop for our tour of Busaco which includes the military museum, battle monument, Wellington’s Command Post, Craufurd’s and Massena’s Mills. Late afternoon we take a tour around the university and Roman city of Coimbra where we spend the night.

We travel through the extreme countryside of Beira Alta to Fuentes de Onoro fought in 1811 where we visit the traditional village and walk along the sandy tracks, little changed over the centuries. Thence to Ciudad Rodrigo to walk its walls, visit its cathedral, while away some time in its lovely Plaza Mayor and check-in to our hotel for one night.

The arid plains around the farming village of Los Arapiles have changed little over the years. Above Miranda de Azan we will envisage the fierce attack launched by Wellington and climb the Greater Arapile to see the final defeat of the French in July 1812. Late afternoon we explore the wonderful university city of Salamanca with its beautiful yellow stone buildings, vibrant centre and stunning cathedrals. Check in to our hotel for one night.

Whilst these historic cities would have been known to soldiers throughout the ages, our visits are purely cultural as we take a guided tour of both. They boast superb cathedrals, daunting fortifications and mazes of tightly winding lanes. Continue to the well-appointed town of Lerma where we spend the night.

The great victory at Vitoria was secured by Wellington’s use of hidden ground and outflanking manoeuvre to the north. We visit the original French positions at Arinez, the numerous crossing points over the Zadorra, the heights of Zuazo, the actions at Gamarra Mayor and Durana. We cross the border into France and check in to our hotel in Biarritz for the last two nights.

Re-crossing the border we examine the audacious crossing of the Bidassoa at Irun and drive up to the curious Col d’Ibardin above Vera. From here we gain splendid views over the Rhune mountain up which we travel by train later in the afternoon. That lofty mountain provides picturesque yet commanding views over the French countryside from which Wellington was to benefit in his execution of the battle of the Nivelle.

Drive to Bilbao via the pretty little port of Pasajes for our return flights to London Gatwick. 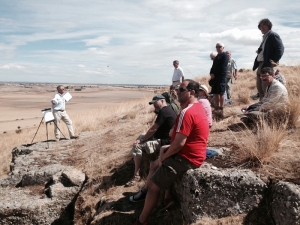 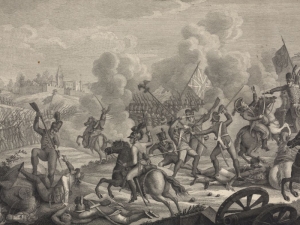 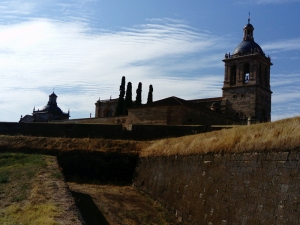 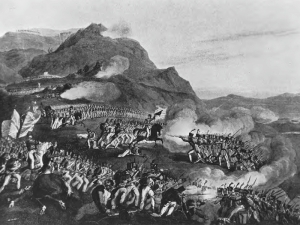 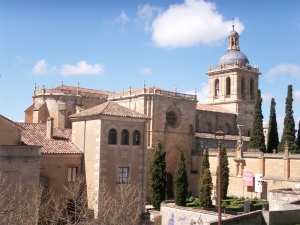 The Cathedral of Ciudad Rodrigo 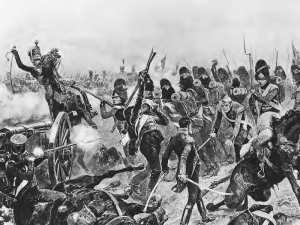 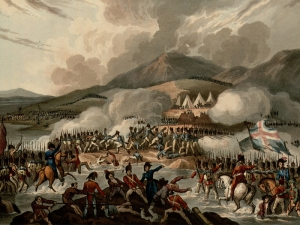