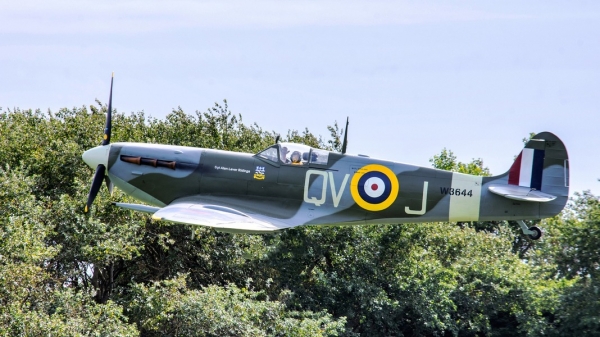 Flight Sgt Jan Iwanowski’s experiences of the Second World War is an epic, untold tale of overcoming the odds. One of the last WW2 Spitfire pilots alive in Britain, Jan endured two years in a Soviet labour camp before being transferred to the British and becoming an RAF hero of the skies.

Almost as old as the RAF in which he served, Jan recently turned 100 at his long-time home in Cornwall, but he was actually born in Novogrudek, Poland (now part of Belarus). Enlisting in the Polish Army when he was barely 20 years old, Jan was captured by the Soviet Red Army when they stormed in from the East while Hitler’s army invaded from the West.

Jan was held in the notorious Lubyanka prison in Moscow before spending two unbearable years in a Siberian gulag. He was forced to work in the forests, felling trees in freezing conditions.

“The forest was so vast,” he remembered, “We were so lonely. I started to sing to keep myself company and avoid going mad.”

Jan was handed over to the British with other Poles as part of a soldier exchange programme, but it appeared that the British were unsure of what to do with them. Jan travelled through Afghanistan and the Middle East and ended up in North Africa. Here he was given new clothes and shoes because his own were now little more than rags hanging off his body.

Over several months, he and his Polish comrades were transported to South Africa, then across the Atlantic to North America and Canada.

“The British didn’t quite know what to do with us, but in the end, they took us to Britain,” Jan recalled. “That’s when I joined the RAF and trained to be a pilot.”

Jan flew both Spitfires and Lancaster Bombers from 1942 onwards, but it was in the iconic Spitfire that he spent most of the war, protecting London from Luftwaffe bombing raids.

“I don’t remember how many missions I did”, he said. “It’s so long ago. I would shoot at German planes and when you hit them there’d be smoke coming out. You hoped they would go down.”

“Flying was a passion, but I did my duty too. I knew that, when their planes went down, we were taking out their best.”

“There was a strong sense of satisfaction when you saw a German plane go down.”

Jan was awarded the Air Force Medal for Gallantry for his efforts during the war.

One of eight children, Jan believed that his entire family was dead after the war. However, in 1952, the Red Cross managed to locate them scattered across Russia and Eastern Europe.

“One of my brothers was in Siberia and another had been forced to join the Resistance. My sisters had been taken to Germany and were forced to work in factories.”

“In the end my mother went to collect them all. They all went back to Poland.”

When asked why he didn’t move back to Poland with them, Jan spoke of how proud he was to feel British.

“My wife was British. I had a business. Then we had a daughter. My life was here. I’m far more British than I am Polish.”

Jan had left the RAF by 1947, gaining British citizenship and opening a hair salon in Wolverhampton. After 15 years, he moved his family to St Erth, Cornwall, where he ran the local Post Office with his wife for the next 20 years. Despite staying in Cornwall, Jan has travelled several times to see his relatives in Poland.

Jan now lives in Truthwell, just outside of St Just with his daughter, surrounded by photos of his two grandchildren and three great-grandchildren.