This 'War and Peace' tour based out of both Moscow and St Petersburg gives you the chance to immerse yourself in the world of Leo Tolstoy and his epic novel. In Moscow experience the best of Russian history and culture, with the focus on one of its most celebrated cultural heroes, then surround yourself in the imperial splendour of St Petersburg, including a number of locations used in the filming of the recent BBC adaptation of the book.

Accompanied by your own private English-speaking guide, spend time in Russia's two largest and most visited cities. In Moscow, explore Russia’s mighty capital and the centre of its political power with particular focus on the life and times of Tolstoy himself. Before departing for St Petersburg, you will have the opportunity to tour the battlefield of Borodino which features so heavily in Tolstoy’s novel. The beautiful city of St Petersburg, once home to the Tsars, is an abundance of grand palaces, stunning architecture and the centre of Russian Art, which have all contributed to it becoming a UNESCO World Heritage Site. These remnants of the past will truly transport you back to the world of Prince Andre, Count Pierre and Countess Natasha.

We can include flights from London to Moscow or St Petersburg. It's also possible for us to arrange a private driver guide to take you to all the sites you wish and also arrange travel between Moscow and St Petersburg which are easily transferable by train.

A local English speaking guide can accompany you throughout or for part of the tour.

Day 1 - Moscow. Meet your guide and enjoy a sightseeing tour of the Russian capital, taking in all of its famous landmarks such as Red Square and the Kremlin, plus some of Tolstoy’s personal favourite spots. Check into your hotel for 3 nights on a bed & breakfast basis.

Day 2 - Yasnaya Polyana & Tula. After breakfast take the train to Yasnaya Polyana, accompanied by your guide. This is the estate where Tolstoy was born and spent most of his life, wrote most of his works and also set up 13 schools for the local peasant children. You will then continue to the nearby medieval town of Tula, apparently older than Moscow itself, to visit the Tolstoy museum. In the afternoon there will be a guided tour of the city and a visit to a Samovar museum, the highly decorative metal tea urns famously made in the region. After dinner you will transfer back to Moscow.

Day 3 – Moscow. This morning your guide will take you to the Tolstoy museum, home to thousands of artefacts, handwritten works and paintings depicting scenes from his novels. There will also be a visit to Tolstoy’s Moscow residence. In the afternoon enjoy a chance to visit the Borodino Battlefield Panorama and museum. Borodino was the deadliest battle of the Napoleonic Wars and is heavily featured in War and Peace. There will then be free time to explore further on your own or do some souvenir shopping.

Day 4 – Borodino & St Petersburg. Check out of your Moscow hotel this morning and drive out to and tour the Borodino battlefield. Here you will have the chance to really get a feel for both the strategy and chaos of the crucial battle that paved the way for Napoleon to enter Moscow. It also has the oldest battlefield museum, containing original uniforms and weapons. Having visited the museum take the train to St Petersburg. Check in to your hotel for 3 nights on a bed & breakfast basis.

Day 5 – St Petersburg. Gain a feel for this magnificent city, once home to the Tsars and now a UNESCO World Heritage Site, during a guided tour of the major sites. Spend the afternoon marvelling at the wonders contained within the vast, world-famous, Hermitage Museum. The Hermitage is one of the oldest and largest museums in the world containing an incredibly vast collection of art, treasure and antiquities from around the globe. One of the buildings that houses the collection is the Winter Palace, home to the royal family from 1732 until its demise in 1917.

Day 6 – St Petersburg. Take the short journey out of the city to the village of Pushkin for a visit to the Tsars’ summer residence, Catherine Palace. The palace is one of the finest examples of Rococo architecture to be found and is home to the famous Amber Room, a large chamber of decorated amber panels adorned with gold leaf and mirrors. The palace features in both the novel, during the famous scene of the Tsar’s Ball, and in the recent BBC adaptation. To finish off your 'War and Peace' tour, visit the grand Gatchina Palace, one of Catherine the Great’s personal favourites, which became a royal residence and then an Imperial City (official residence of the Russian Emperors). More recently it has featured as a film location for a number of ‘War and Peace’ film and TV adaptations.

Day 7 – Check-out of your hotel and transfer to St Petersburg airport for your flight home. 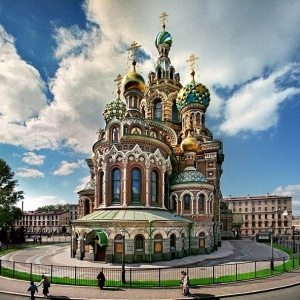