In The Footsteps Of Alexander The Great

Archaeology, Battles And Sieges In Turkey

In The Footsteps Of Alexander The Great

Archaeology, Battles And Sieges In Turkey

Our ten day tour to Turkey explores the myths and reality that surround Alexander the Great as we follow in the footsteps of his army, starting at Granicus, heading south along the Ionian Coast and ending by tracing the liberation of the Lycian Valley. We explore the ruins of Alexander’s metropolis of Militus, the beautiful temples at Assos, Ephesus and Priene, the ancient harbours of Telmessos and Phaselis, and the remote, atmospheric Patara and Termessus. We will see two of the seven wonders of the ancient world as well as spending time in Istanbul and Antalya.

Dr Andy Fear, historian, archaeologist and lecturer in classics at Manchester University leads this fascinating tour of battles, sieges, history, archaeology and architecture to provide evidence to establish the fact from fiction.

After subduing the rebellious Greeks, Alexander embarked upon a campaign against the Persians that took him to the edges of India in search of the end of the world. In doing so he created one of the largest empires of the ancient world and earned himself a place in legend. With an uncertain claim to the throne, Alexander set out to liberate the region of Asia Minor from King Darius III and reclaim the lost Greek territories of his forefathers. The campaign of 334-333BC saw some of Alexander’s most spectacular and memorable moments, from the ingenious crossing of the Hellespont to the defining and disputed battle of Granicus, from the mythical cities of Troy and Halicarnassus to the defiant cities of Aspendus and Termessus.

Fly from London to Istanbul and check in to our hotel for two nights. Introductory talk and pre-dinner drinks.

We visit the outstanding Archaeology Museum to peruse the riches recovered from antiquity across Asia Minor including the impressive decorated sarcophagus of King Abdalonymous of Sidon, in the past confused with the legendary leader himself. Thence to the thrice built Hagia Sophia, one of the region’s most spectacular examples of architecture and the battlements of the imposing Byzantine walls.

Drive to the battlefield of Granicus, where Alexander won a resounding victory against the Persians paving the way for his conquest of Anatolia. Here we discuss the very different ancient records of Alexander’s tactics. Thence to the ruins of Troy, the scene of the triumph of Alexander’s personal hero, Achilles, and to which he made a special personal pilgrimage. We continue to Canakkale, the narrowest point on the Dardanelles, the inspiration for the Greek legend of Hero and Leander and where Alexander’s army crossed into Asia. Check in to our hotel for one night.

Along the Aegean coast we find the beautiful 1st Century BC ruin of Assos, once the home of Alexander’s tutor, the philosopher Aristotle. Wander around the once glorious Temple of Athena before making our way to Pergamon, the seat of what became a regional superpower in the aftermath of the collapse of Alexander’s Empire. Brave the walk or take the cable car to look down upon the steepest Greco-Roman theatre in the Roman Empire before heading into Bergama for one night.

An early start will take us to the ancient city of Ephesus where we will spend the whole day exploring this historic port which welcomed Alexander’s troops with open arms. We wander the streets of this forgotten world, stroll past its iconic library and bear witness to one of the seven wonders of the ancient world, the Temple of Artemis. We see the changing character of the city through its architecture, with a Greek temple juxtaposed with the Basilica of St John and his tomb, before heading into Selcuk for one night.

We explore an Ionian Trinity of ancient Greek cities: Priene, where Alexander personally funded the building of the temple to Athene Polias; Miletus, besieged by Alexander, with its now landlocked port’s battered defensive walls and castle; and Didyma with its Sacred Way, the road that connected Miletus to the Temple and oracle of Apollo which, after its destruction by the Persians, was rebuilt by Alexander. End the day at our hotel in Bodrum.

Day 7 - Halicarnassus and the Lycian Valley

At Halicarnassus we admire the crumbling walls, pillars and rubble that was once a wonder of the world, the massive tomb of King Mausolus. We discuss the influence of another of its famous citizens - Herodotus, the father of History. It was here that Alexander faced perhaps his most dangerous opponent, the Greek mercenary commander Memnon. We drive to Telmessos, the home of Alexander’s favourite sooth-sayer and constant companion, to see its spectacular Lycian tombs. We make brief stops at tragic Xanthos, the romantic water-logged ruins of Letoon, and Patara which, after surrendering to Alexander, grew into a wealthy and strategically important naval base. We end the day at our hotel in Kas.

Continuing our coastal journey we arrive at Limyra, the Zemuri of the ancient Lycians and site of the cenotaph of a man who would have ruled the world had he lived: Caius, Augustus’s grandson. Thence to Phaselis, the town of three harbours and Alexander’s headquarters in the winter of 334 BC, picturesquely set beside the turquoise Mediterranean Sea. Continue to Antalya and check in to our hotel for two nights.

At Aspendos, whose fickle inhabitants tried to double-cross Alexander, we visit a magnificent theatre. We explore the fortress of Sillyion, a town as ancient as Troy, which successfully defied Alexander. And at the commanding ruins of Termessos, called “the eagle’s nest” by Alexander, we wander through tombs, city walls, and foundations to reach the spectacular amphitheatre, perched as if it were on the edge of the world.

Fly back to London from Antalya via Istanbul. 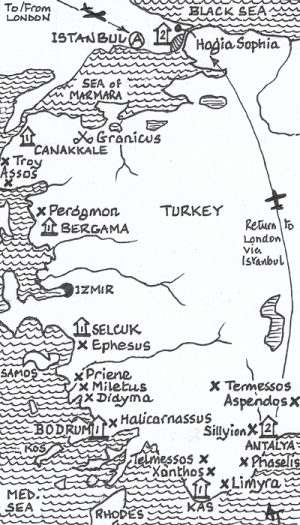 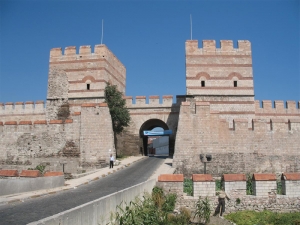 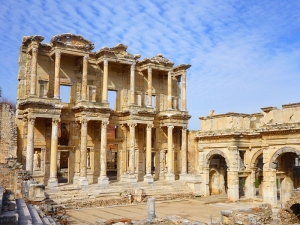 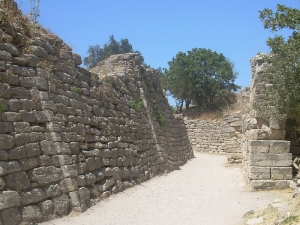 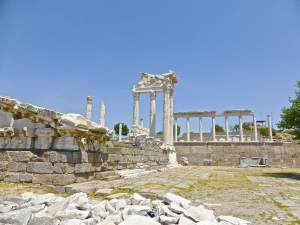