This tour is a study of the two conflicts between the Afrikaners seeking independence and the freedom to maintain their unique way of life, and the imperial Forces of the British Empire during the height of the scramble for Africa. Travelling through this wonderful country you will get a feeling for its vastness gaining an insight into the problems this caused and how the Boers could use it to their advantage. There is also a chance to spot some of Africa’s unbeatable wildlife whilst venturing through impressive landscapes, and staying in characteristic accommodation in serene and natural surroundings. As we have learnt from our Zulu tours, the local hospitality in South Africa is always welcoming and your expert historian, Ian Knight, is unrivalled in his knowledge of the country and its military history.

In the first half of the 19th century, a desire for freedom from the British government drove large numbers of Afrikaners away from the settled areas into the hinterland. Conditions on the ‘Great Trek’ were harsh and dangerous, and progress was contested by African groups along the way, but it achieved its aim of independence for the Transvaal (1852) and the Orange Free State (1854). This, however, was the age of empire and Britain was pursuing the wealth and prosperity of this rich and fertile country, and in 1877 annexed the Transvaal republic. In 1881 the Boer population rebelled and the fighting began. We look at the events which led to that war, the opposing forces and the humiliating defeat of the 'Rooineks' at Majuba Hill in February 1881.

The life of the new republic was short. With the discovery of gold in the Transvaal, the Boer way of life was again threatened by an influx of foreign miners, 'Uitlanders'. In October 1899 the conflict was reignited. This was a war of sieges, of huge distances and guerrilla warfare and we look at the commanders, strategy tactics and the fighting men of both sides whilst exploring the most important battle areas.

"Corpses lay here and there. Many of the wounds were of a horrible nature. The splinters and fragments of the shells had torn and mutilated them. The shallow trenches were choked with dead and wounded"

After a morning arrival in Johannesburg we drive south to explore the battlefields of the climactic actions of the 1881 Transvaal Rebellion. Firstly at Laing’s Nek we discover how General Sir George Colley completely underestimated the 2,000 strong Boer force and was defeated. Thence onto Majuba Hill where Colley and his 550 men succumbed to a humiliating defeat, Colley himself being killed in the action. The defeat led to the Treaty of Pretoria granting independence to the South African Republic. We head onto Dundee, which changed hands twice during the Second Boer War, and check in to our hotel for three nights.

Day 3 - Talana and the Siege of Ladysmith

18 years after the treaty was signed, the conflict once again flared up. The opening battle of the Second Boer War was at Talana Hill where a frontal attack by the British - this time wearing khaki - succeeded, but at the cost of heavy losses. Thence to Elandslaagte, where once again the British were victorious, but retreated instead of hammering home the advantage. This would become the prelude to the siege of Ladysmith, to which we turn our attention this afternoon, visiting the dedicated museum and the actions around the defensive perimeter of Platrand and Wagon Hill.

Today we focus on the actions of the Ladysmith relief column starting with the early failure at the Battle of Colenso where a 21,000 strong force led by General Buller were beaten back by 6,000 entrenched Boers. Buller was so badly beaten that he advocated the surrender of Ladysmith. Despite this he led a successful assault on the Thukela Heights after the disaster of Spioen Kop, which led to the siege being lifted and the tide of the war began to turn.

Spioen Kop was the defining battle for the relief of Ladysmith and one of the most poignant British disasters of the war. After believing they had taken a commanding position atop Spioen Kop under the cover of darkness, the British were horrified to find that their position on the summit did not command the approaches. This left them completely exposed to Boer artillery fire and to an assault at close-range, and nothing short of a massacre ensued. The British force eventually left the hill beaten and bloodied after what was an all-round military disaster – although, ironically, the Boers also withdrew, believing that the British had managed to hold on. This afternoon enjoy a relaxing and scenic drive through the foothills of the Drakensburg to our accommodation in Golden Gate National Park for one night

Our first visit today is the battlefield of Sannah's Post which was one of the first actions of the guerrilla war. In a perfectly executed ambush, the Boers inflicted heavy losses and secured access to Bloemfontein’s water works, aggravating an epidemic of enteric fever dysentery and cholera among the occupying British army. We head into the Free State capital of Bloemfontein and visit The Emily Hobhouse Museum. Emily Hobhouse was a remarkable woman who performed crucial relief work at the concentration camps despite fierce opposition from her own countrymen. We head to our accommodation in Langberg and experience Karoo hospitality at its best

Today is spent following these actions including the battle of Modder River, where the Boers managed to delay the strong British force on their way to Kimberley but were ultimately unsuccessful and retreated to Magersfontein, where they dug in and successfully repulsed a frontal attack two weeks later. At the Magersfontein Museum, we can see some preserved Boer trenches and explore the recently renovated exhibition. We end the day with the battle of Paardeberg, which actually took place after the relief of Kimberley. Blocking the Boers’ route to the Modder River, Kitchener led a poorly executed assault and was repulsed. A siege followed and the Boers, under Cronjé, were starved into surrender.

Day 8 - The relief of Kimberley

The siege of the diamond mining town of Kimberley lasted for 124 days and, although ill prepared, the inhabitants’ and garrison’s improvised defence held out. We hear of the trials and tribulations of living under siege and visit the Kimberley Museum. We then head to the ‘Big Hole’, the remnant of an open Diamond Mine that claims to be the largest ever excavated by hand - an incredibly impressive site! This afternoon is free for you to relax and explore at your leisure.

We check out of our hotel for the last time and drive north through the vast and impressive semi-desert terrain of the Karoo and into the Transvaal. Evening return flight from Johannesburg to London. 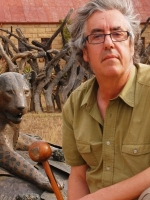 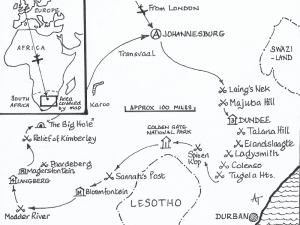 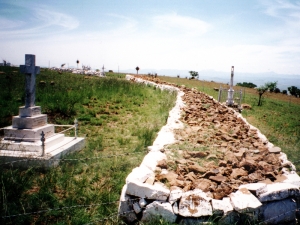 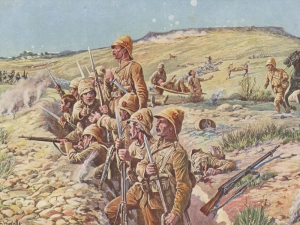 In the trenches at Ladysmith 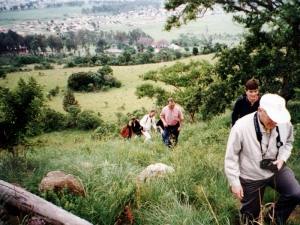 Filed artillery going in to battle 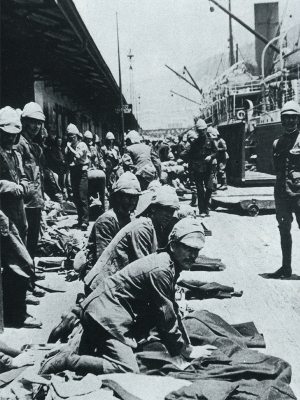 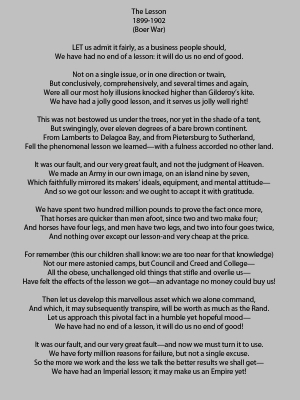