This 14-day tour of China follows the ancient Silk Road trade routes from the metropolis of Beijing, beyond the Great Wall to the ancient streets of Kashgar. See archaeological wonders from the famous Terracotta Warriors to the fascinating ruins of Jiaohe and the colourful Mogao Caves. You will discover how the Silk Roads influenced the development and culture of the Chinese frontier cities of Turpan and Dunhuang and see how these traits are still present today at the kaleidoscopic Kashgar Bazaar.

Along the way we will stay in Imperial Beijing and the cultural paradise of Xi’an and stand on the westernmost edge of the Great Wall, diving into all of the culinary and architectural delights this vast and varied country has to offer.

You will be accompanied throughout by historian Dr James Greenbaum. A Visiting Fellow in the School of Culture, History & Language at the Australian National University, James has also taught and mentored post-graduate students at Renmin University in Beijing and has published multiple books on Chinese culture and history.

The Silk Roads were a series of ancient trade routes that stretched from the frontiers of Imperial China to the shores of the Mediterranean. Linking the Far East, the Middle East and Europe, the Silk Roads involved over 40 countries that exported silks, spices, livestock, goods and, most importantly, culture. Operating from the 2nd Century BC until it was closed off in the mid-15th Century, the influence of this defining era can still be seen and felt in China today; from the decline of Buddhism and the rise of Islam in the north, to the amalgamation of art and architectural styles from across the world visible on its thriving city streets.

Overnight flight from London to Beijing.

Arrive in Beijing and transfer to our hotel for two nights. This afternoon we visit the Temple of Heaven, a masterpiece among China’s ancient sacrificial buildings used for rituals during the Ming and Qing Dynasties. Later we will make our way to the centre of the city and walk through the narrow streets and alleyways of Beijing’s Hutongs to experience the sights and sounds of the old Beijing lifestyle and truly feel the historical changes of this great city.

Day 3 - The Great Wall and the Imperial City

Travel to a lesser visited part of the Great Wall and climb the rising towers to appreciate its preserved original appearance and great views across the dramatic landscapes. Return to Beijing to tour Tiananmen Square and the impressive Imperial Forbidden City.

We will take a fast train to Xi’an, the cultural capital of China and check in to our hotel for two nights. This afternoon we will visit the Shaanxi Provincial History Museum with its magnificent architecture and unrivalled collection of bronze wares, chinaware, jade and mural paintings. End the day by exploring the lively Muslim Quarter.

Marvel at the clay army of the great Emperor Qinshihuang, created to protect him in the afterlife. Walk through over 8,000 life-sized warriors, horses and chariots that were hidden for over 2,000 years, and experience one of the most important and fascinating archaeological finds of the 20th Century. Return to the city and visit the towering seven-storey Great Wild Goose Pagoda, a Buddhist masterpiece built to preserve classic scriptures. Finally, we take a peaceful stroll on the ancient City Walls and enjoy the beautiful panoramic views of modern Xi’an, juxtaposed with the preserved brickwork.

This morning we will fly from Xi’an to Kashgar. Upon arrival, transfer to our hotel and check in for two nights. This afternoon we will discover the delights of the Kashagr Old Town.

We will spend most of today at the kaleidoscopic Kashgar Bazaar, where we will observe a myriad of merchants trading livestock, silks, spices and goods from all over Asia, as they have done at this location for over 2,000 years. We will also visit the azure tiles and colourful Apaq Khoja Mausoleum and the Idkah Mosque, one of the largest mosques in China.

Travel to Turpan to see the curious mummies and other precious treasures that have been preserved by the arid climate, documenting the rise and fall of this ancient cultural meeting point. Check in to our hotel for two nights.

Against the backdrop of the desolate Gobi Desert, we will visit the resplendent ruins of Jiaohe, the ancient capital of the Cheshiqian kingdom, which would have been well known to travellers along the Silk Road. Travel through the cool tunnels of the ingenious Karaz Well System and traverse the Bezeklik Thousand Buddha Caves, built into the cliff face of the picturesque Flaming Mountains.

Visit the unique and richly decorated Emin Minaret before taking the fast train to Dunhuang, once a major city on the Silk Road. This afternoon we will travel to the outskirts of the city to visit the miraculous Crescent Lake and stunning Ming-Sha Dunes. Check in to our hotel for two nights.

An unmissable Silk Road highlight, the Mogao Caves are an ancient Buddhist monastery and pilgrimage site, whose walls are still adorned with fascinating murals and colourful statues that reflect the development of China. Return to Dunhuang to visit the museum which houses many sutras and treasures recovered from the caves, and walk around the vibrant night market.

Drive to Jiayuguan and check in to our hotel for one night. This afternoon we travel to the draconic Overhanging Great Wall, hidden on the slopes of the intimidating Black Mountain to trap those who wanted to avoid the daunting Jiayuguan Pass.

Stand upon the ramparts of the westernmost edge of China’s Great Wall and explore the vital fortress that defended the last frontier of the Chinese empire. We will walk through the renovated fortifications and imposing gate towers and discover the weapons, armour and tactics employed along the massive structure. Fly to Beijing and check in to our hotel for our last night. 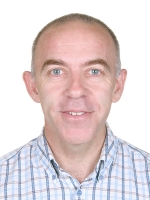 An Australian historian, Greenbaum first travelled in China in 1983, and was based in Beijing from 2004-2017. He is a Visiting Fellow in the School of Culture, History & Language at the Australian National University. 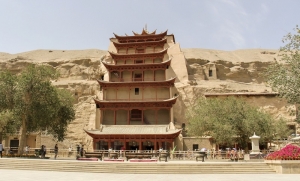 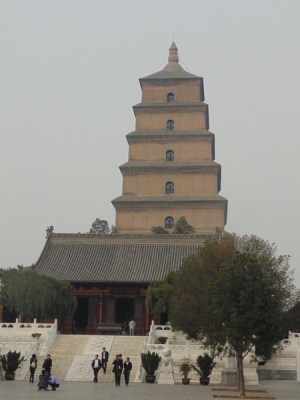 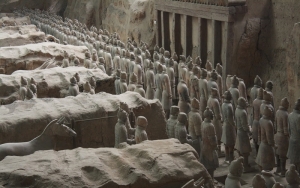 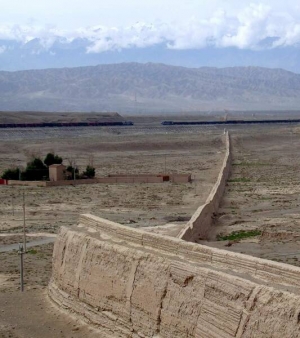 The Great Wall near Jiayuguan 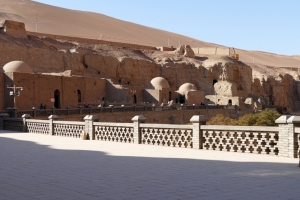 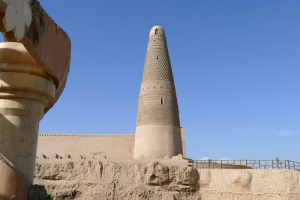 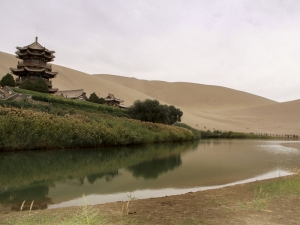