Battling through the Norman Bocage

Breaking out from Omaha to St-Lo

Battling through the Norman Bocage

Breaking out from Omaha to St-Lo

This tour focuses on some of the most bitter and costly fighting of the entire north-west European campaign. It follows the routes taken by American forces as they smashed through the German coastal defences at Omaha Beach and thrust inland towards the key communications centre of St-Lô. Special attention is paid to the achievements and experiences of the famous U.S. 29th Infantry Division (‘The Blue and the Gray’), which lost thousands of men as it fought its way forward through the hedgerows, orchards and villages of Lower Normandy from 6 June to 18 July 1944. But we will also examine some desperate battles fought by other U.S. units, and see the fighting from the German perspective as well as that of their opponents. The tour culminates in the city of St-Lô, devastated by Allied air power and artillery in 1944, but now sympathetically restored and a thriving centre of Norman country life.

Enjoy spending time in the charming and interesting city of Bayeux, home of the famous ‘Bayeux tapestry’ and one of the few Norman towns of any size to have escaped the destruction visited across so much of the region during the 1944 campaign.

Of all the D-Day amphibious assaults, Omaha Beach was the most fiercely contested. Poor navigation, powerful currents and a strong sea swell cost many lives before a single American foot was placed on the sand. Encountering mines, beach obstacles and a deadly cross-fire from German defences on and inland from the coast, the Americans struggled for a hundred hours to secure their D-Day objectives. When on June 11, forces from Omaha and Utah linked up near Isigny, the battle for Normandy moved into its second stage, as heavily depleted U.S. battalions grappled with tenacious German defenders amidst the numerous hedgerows, sunken lanes and fortified villages of the Norman Bocage. Measuring their daily advance by the number of hedges and lanes crossed, this battle of attrition lasted over a month, culminating in a savage battle for St-Lô, which finally fell to the American 29th Corps on 18 July.

Travel by Eurostar to Paris and from there by SNCF to Bayeux where we check in to our hotel, our base throughout the tour. Welcome drinks and introductory talk.

We contextualise the events of the next few days with a visit to the excellent exhibition at Omaha Beach visitors’ centre at Colleville-sur-Mer. On the beach itself, we study the bloody battle to establish a beachhead there on 6 June. As we approach Grandcamp, we will see where T/Sgt Peregory won his Medal of Honor, before going on to explore the recently discovered and excavated bunkers, tunnels and trenches at the nearby Maisy German coastal battery. Our day ends at Isigny, where U.S. forces from Utah and Omaha beaches linked up on 11 June.

In the morning we follow some of the exploits of the US 101st Airborne Division, visiting the site of the battery destroyed by Easy Company 506 PIR at Brécourt Manor, the museum at ‘Dead Man’s Corner’ and the causeway down which the 101st attacked to capture Carentan on 11-12 June. Later we drive to the River Aure, where 29th Division performed an audacious assault across a wide flooded valley as it thrust inland from Omaha Beach. Besides the monument at Le Carrefour we see where an exhausted and ’green’ battalion of the US 115th Infantry Regt was subjected to a surprise German night attack. We end our day at the site of a ferociously-opposed river crossing near Ste-Marguerite-D’Elle

Day 4 - Battle of the Hedgerows

At Graignes we follow the gallant stand by stray elements of 82nd Airborne Division against the ruthless 17th SS Panzergrenadier Division, and discuss the ensuing massacre of the wounded and civilians. Thence to the battles west of the River Vire, in which the Americans had to overcome cunningly-emplaced defences in the hedgerows and farms of rural Normandy, and repulse a series of violent counter-attacks. We pay special attention to battles involving the elite German Panzer Lehr Division on 11 July as it sought to drive the Americans back towards the coast. We end our day under the oak trees at La Cambe cemetery, where more than 21,000 Germans who died during the Normandy campaign are interred.

Today we look at how American forces broke the back of German resistance near St-Lô. We begin at Hill 192, where the U.S. 2nd Infantry Division delivered a stunning blow against some of the most determined and effective fighters deployed by the Germans anywhere in north-west Europe – the fallschirmjäger of General Meindl’s 2nd Parachute Corps. Then we follow the route along the Martinville Ridge taken by the U.S. 29th Division as it slogged its way yard-by-yard towards its final objective. Finally, we head into St-Lô itself, telling the story of the American drive into the heart of the city, and visiting the church where the body of Major Tom Howie – made famous across the world as ‘The Major of St-Lô’ – was laid in honour shortly after the ruined city was liberated.

We return to Omaha to visit the beautiful but sombre American cemetery at Colleville-sur-Mer where we pay our respects to Major Howie and many other young Americans who died during these desperate days of summer 1944. Return to London by train via Paris. 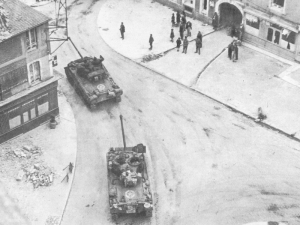 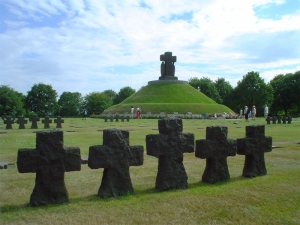 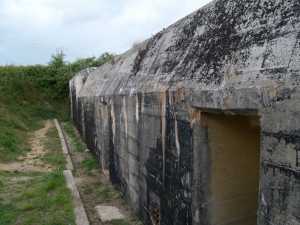 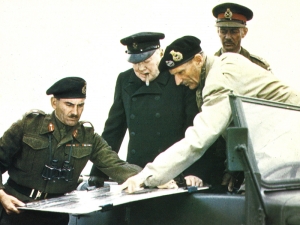 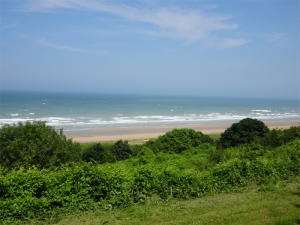