Home of the Emperors

Home of the Emperors

Our tour looks at the province’s towns which were its heartbeat, showing us magnificent buildings, mosaics and other works of art in Seville, Ecija, and the provincial capital, Cordoba, and also where new finds are emerging at Torrparedones, the ancient colonia of Ituci where we can see how a pre-Roman settlement and its fortifications were Romanised. We shall also visit a whole suburb built by the Emperor Hadrian for his hometown of Italica which includes one of the largest amphitheatres in the Roman world. As well as urban splendour, we will also visit the villas and garum works which generated this fabulous wealth and see how, in towns like Carmona and Cadiz, locals held on to their Carthaginian heritage despite the passing of the centuries.

Modern Andalucía was the second oldest province of the Roman Empire. It was captured from Hannibal’s Carthaginians in the Punic Wars after the battle of Ilipa, outside of Seville, in 206 BC and then remained a Roman possession for some six hundred years. First known as “Further Spain”, Hispania Ulterior, and then as Baetica after the river Guadalquivir which runs through its heart, it became one of the wealthiest provinces of the empire, famous for its exports of Olive Oil and Garum or fish sauce. It was also the birthplace of some of Rome’s most famous sons, such as the emperors Trajan and Hadrian, the epic poet Lucan, and the philosopher Seneca. The region’s prosperity continued in the post-Roman period. The Visigothic bishop of Seville, Isidore, wrote an encyclopaedia, the Etymologies, which was to be the standard work of reference across Western Europe for the best part of a millennium and he has recently been made patron saint of the internet.

Fly London – Malaga. Driving in to the historical centre of this lovely city, we gain a glimpse of Malaga’s Roman Theatre. After lunch we head for Jaen and check in to our hotel for one night. Evening lecture before dinner.

We visit Jaen’s wonderful provincial museum with its fine collection of 5th Century BC sculptures and Spain’s largest surviving Moorish baths, the Baños Arabes. At the impressive Torreparedones Archaeological Park, where digs continue, we find amongst other things, the forum with its monumental inscription carved in to the pavement, the Ibero-Roman Sanctuary, fortified eastern gate and important necropolis. Continue to our hotel situated on the edge of the Sierras Subbeticas Natural Park.

We drive to the Roman villa ‘El Ruedo’, one of the largest such sites in Iberia, with its mosaics, paintings and paving. Thence to the impressive Roman cisterns found under a cemetery in Monturque. Continue to Cordoba to visit the archaeology museum with its fine display of Roman mosaics, ceramics and glassware. Check in to our hotel for the night.

We see Cordoba’s Roman bridge and temple before we drive out to the Roman villa of Fuente Alamo, with its superb collection of figurative and geometric mosaics and thermal baths, and the archaeology museum at Puente Genil. This afternoon we head for Ecija, known in Roman times as Astigi, where we find the Archaeological Museum which holds fascinating finds including many mosaics recovered from sites still under excavation. We will also see a monumental Roman pool and the church of Santa Cruz where the altar is a reused Byzantine sarcophagus. Check in to our hotel for one night.

We stop at Osuna to explore the ancient quarry of El Coto las Canteras. Upon arrival at Carmona we discover the Romano-Punic necropolis, the recently accessible amphitheatre, the Gate of Seville with its origins in the Punic period, and the excellent Town museum with its remarkable collection of Tartessian artefacts. Check in to our hotel for the night.

Just outside Seville lies the archaeological site of Roman Italica, birthplace to Hadrian and Trajan. We will explore its theatre, massive amphitheatre, large houses with preserved exquisite mosaics, temples, baths and sophisticated sewer system. Amongst the huge collection of Seville’s archaeological museum we will discover statues and busts of Roman emperors and gods, treasure collections, mosaics, bronzeware and much more. Continue to Cadiz where we spend the night.

Exploring Roman Cadiz/Gades we find the impressive 1st Century BC Roman Theatre, a columbarium, garum factory and its museum housing Phoenician and Roman artefacts. At the Phoenician site of Gadir we walk above and look down on 5000 year-old streets and houses and follow evolution of Cadiz from its foundation to Roman times. At Baelo Claudia we find the excavated remains of an almost complete Roman town and we will wander around it streets, houses, basilica, theatre, forum and temples. Our day ends at the archaeological site of Romano-Punic Carteia in the bay of Algeciras which boasts a fine collection of excavated buildings. Check into our Algeciras hotel for one night.

En route to Malaga we stop at the remains of the Paleochristian basilica of Vega del Mar. Return flight to London. 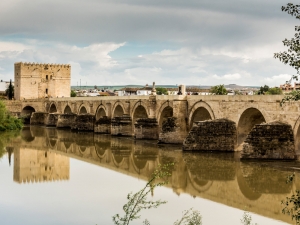 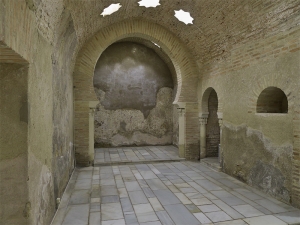 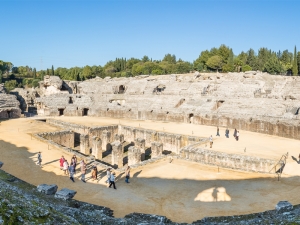 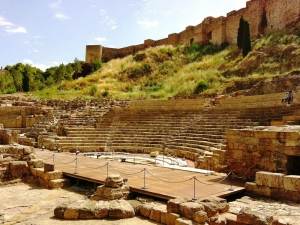 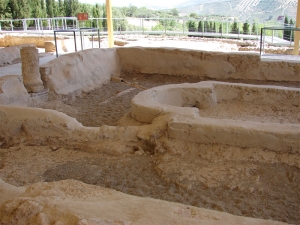