Now’s your chance to visit the neglected battlefields which made up Kesselring’s last line of defence. If you have a grasp of Sicily, Salerno, Cassino and Anzio - or perhaps you’ve already visited them - this tour makes the perfect epilogue to study those who dodged D Day! The coastal plain up which the Canadians and Poles tried to thrust near Ancona soon gives way to increasingly rugged foothills, each guarded by rushing streams and rivers, all of which required assault bridges to be put in place and under fire.

The Germans battled toughly but elegantly for every yard, killing and wounding Allied troops as they tried to grind northwards from Florence towards the Po Valley and the dream of a break out.

Patrick Mercer’s father fought here and he’s especially pleased to show his guests the supporting orders, maps and photographs which were used in this bitter fighting. He also had the chance to visit many of these battlefields with veterans in the 1970s and recorded their stories. This makes a remarkable package, an unforgettable tribute to the Yanks, Tommies and so many others who still lie out there.

As Rome became the first Axis capital to fall in June 44, the Germans pulled back towards the north, first delaying the 5th and 8th Armies either side of Florence before scuttling into their bunkers and tank turrets from Pesaro to Pietrasanta. For the 5th Army, brilliant operations on the Giogo Pass and Mount Ceco were matched by the 8th army at Gemmano and Coriano Ridge, before the Germans began to crumble and finally break back towards their next outposts.

The more mobile warfare around Bologna and Faenza led to punishing combat but it has got to be remembered that these were the same troops - the German Tenth Army - whom the Allies had failed to nail as they left Sicily and then allowed to escape near Rome. The guts and daring of operations near Commachio make a grand backdrop to this often forgotten campaign.

Our flight on day 1 will depart at 8am. If you would like a quote for an overnight stay at London Heathrow please let us know and we can arrange this for you.

Fly London to Bologna and drive through the Germans’ rear areas as we approach the US 5th Army’s target sector of the Gothic Line. Check in to our Bologna hotel for two nights and an introductory lecture.

Today will concentrate on the US 5th Army’s operations to break through the rocky collar of the Gothic Line north of Florence. The village of Baragazza still bears the scars of war, whilst the US 85 and 91 Divisions’ achievements breaking through the narrow bottle necks of the Futa and Giogo Passes are remarkable things to see. Many of the German defences are still there and we will examine both them and the Divisional memorials. We end the day at the impressive yet sad German cemetery to which bodies are still being brought.

We start with the 1st (British) Infantry Division’s breathtaking capture of Monte Ceco and Pte Burton’s gallantry which earned him the VC. The memorial to 11Bn Lancashire Fusiliers, 1Bn Duke of Wellington’s and 2nd Sherwood Foresters will be looked at by those who want a steep climb! The fight for Monte Grande will be examined in detail before we set off for the eastern sector of the Gothic Line which was attacked by the British 8th Army. We check in to our hotel near Rimini for two nights.

Today we will walk over the four attacks at Gemmano and get an understanding of why it was known as ‘The Cassino of the North’. You will be taken to the spot where Brigadier Grenfell Smith-Dorrien was killed before we look at the destruction of 168 Brigade around Croce. The successful attacks around Tribio and Zollara by 56 (London) Division will complete a busy and highly evocative day.

Our fifth day will continue with 8th Army’s operations and those of Sir Richard Hull’s 1st Armoured Division around Coriano. The attack by the 9th Lancers on San Savino will be walked over and, using original documents, we will see how it was finally seized. Via the Gurkha victory at Passano, we will visit the Coriano Ridge CWGC Cemetery before motoring on to Faenza for one night.

We will now move to the pursuit of the Germans and combined operations by looking at two VC actions. The first is that of Capt JHC Brunt of 6th Bn Lincolnshire Regiment near Faenza. Via the Argenta Gap and General Mark Clark’s attempt to storm through enemy resistance in April 1945, we will look at operations by the Special Boat Section on Lake Commachio to examine the actions that led to Anders Lassen being awarded the VC. Drive to Bologna and check in to our hotel for the last night.

We will visit the Bologna Military Museum with its exhibitions on armour, the fighting for Bologna and the Gothic Line. To conclude the tour, we will summarise the whole campaign in Italy, the final stage on the Gothic Line and the last gasp of the enemy in Austria. Fly Bologna to London. 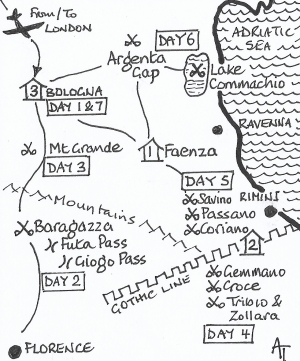 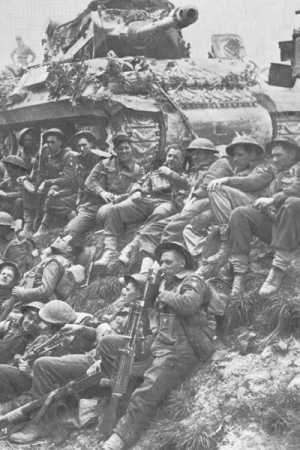 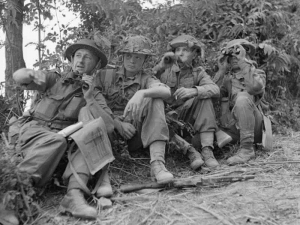 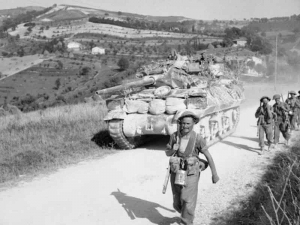 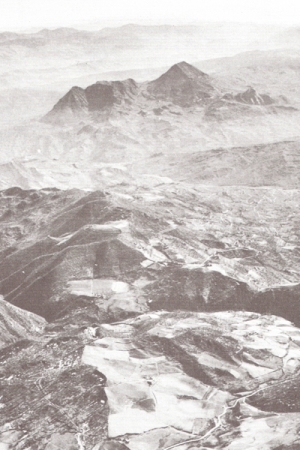