The Jewel of the Arabian Peninsula

The Jewel of the Arabian Peninsula

The 15th Century navigator, Ahmad Ibn al-Najdi described the populace of Oman as ‘hospitable and sociable people who love strangers’. His portrayal of Oman’s citizens is as accurate today as it was 500 years ago. While neighbouring oil-rich countries on the Arabian Peninsula are building skyscrapers, shopping malls and huge convention centres, Oman, the oldest independent state in the Arab world, remains firmly attached to its vivid culture and rich heritage. This 11 day tour begins in Muscat, centre for trade on the historic maritime Silk Roads since the 2nd Century AD. From here we travel by 4x4 inland, traversing the Al Hajar mountain range, gateway to Oman’s interior. These isolated mountains and wadis are home to wolves, foxes, jerboas and gazelle. We explore the huge forts of the Jebel Akhdar and the communities built around Oman’s ancient falaj system before taking a flight down to Salalah, where coconut and banana palms replace the ubiquitous date trees of the north. From here we dip our toes into the great sand sea, The Rub al Khali otherwise know as ‘the Empty Quarter’ and visit some of the sites associated with the Dhofar Rebellion. most notably the battle of Mirbat fought in 1972.

This fascinating tour is led by historian, analyst, and desert explorer Eamonn Gearon. A former Daily Telegraph stringer for the Arabian Peninsula, he also reviews for the Times Literary Supplement. A Middle East specialist, he writes for TV, Jane’s Intelligence, and The Great Courses. His work has also appeared in the Daily Mail, London Magazine, and Geographical.

In recent years, Oman has seldom been in the public eye but the country has played an important part in world history for many centuries occupying as it does a crucial strategic and geographical corner to Arabia and the Indian Ocean. Between the seventeenth and nineteenth centuries, Oman built one of the most notable non-European empires, spanning both the Gulf of Oman and the Indian Ocean. The southern coast was famous in the ancient world as the source of frankincense. The northern coast was one of the most celebrated seafaring areas of the ancient and medieval world. Its contacts with the Middle East, east Africa, the Indian Ocean islands, India and Sri Lanka, even South-East Asia and China, provides a key to an understanding of Asian and African history far beyond its borders.

Day 1 – Depart. Fly London to Muscat and check-in to our hotel for three nights.

Day 2 – Muscat. After a relaxed lunch by the sea, drive downtown to visit Bait Al Zubair a private museum owned and run by the Zubair family. The museum displays the family’s collection of Omani artefacts.

Day 3 – Grand Mosque Muscat, Barka, Nakhal Fort. Morning visit to the Sultan Qaboos Grand Mosque, one of the biggest and most extravagant modern mosques in the world. Drive to the coast for lunch in the coastal town of Barka and visit the 17th Century fortified house, Bait Na’am, now a museum. Continue to Nakhal Fort in the western Hajar Mountains. Return to Muscat for last night.

Day 4 – Al Hazm Fort, Bat and Al Ayn, Nizwa. Journey to Nizwa stopping en route at the impressive Al Hazm Fort, one of the biggest of Oman’s fortified structures, and the beehive tombs of Bat and Al Ayn in their dramatic setting on top of a ridge against the backdrop of the Jebel al Misht. Continue to our hotel in Al Hamra in the mountains above Nizwa.

Day 5 – Guhl, Wadi Nakher, Al Hamra, Misfah. Drive into the mountains towards Wadi Ghul, known as Oman’s ‘Grand Canyon’, and explore the stunningly beautiful Wadi Nakhr gorge. In the afternoon we visit Al Hamra, one of Oman’s best preserved old towns founded during the Ya’rubi dynasty over 400 years ago. Continue to Misfah a medieval village built into the rock face and walk along the falaj which supplies water to a system of terraces where bananas, mangoes, papayas and pomegranates are grown.

Day 6 – Tanuf, Nizwa, Jabreen Castle. Visit the ruins of old Tanuf, destroyed with several 1000 pound bombs by the British RAF in the mid-1950s during the Jabal Akhdar Wars. Continue to Nizwa, known as ‘the pearl of islam’ to explore its 17th Century fortress and visit the souk, mostly used for the everyday trade of fruit and vegetables, but also caters for the casual visitor with antiques, silver and souvenirs to be found. Return to our mountain top hotel visiting en route Jibreen Castle, former residence of Bil’aub bin Sultan and later used as a Koranic school.

Day 8 – Wadi Darbat, Mirbat, Sumhuram. Drive west and into the mountains to enjoy the dramatic scenery of the Wadi Darbat which feeds one of the largest lagoons in Salalah, the Khor Rori. Continue to Mirbat Fort which in 1972 was courageously defended by nine SAS servicemen against hundreds of highly trained and heavily armed guerrillas known as the Adoo. Afternoon visit to the 4th Century site of Sumharam, founded as an outpost for the Kingdom of Hadramawt in modern Yemen once the Nabataeans started to export frankincense from the Hymraite ports.

Day 9 - The Empty Quarter. Journey to the edges of one of the world’s most fabled wildernesses, the Empty Quarter, a sand sea which encompasses most of the southern third of the Arabian peninsula.

Day 10 – Salalah, Al Baleed. Visit the World Heritage site of Al Baleed, ancient port city of Zafar. The ruins date from the 10th – 15th Centuries when the city was settled as a port for exporting frankincense. There is an excellent on site museum displaying finds from Sumharam and Al Baleed, amongst others. 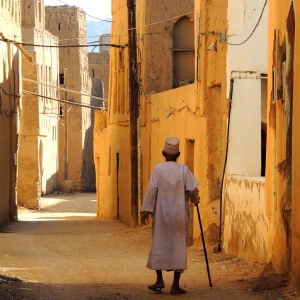 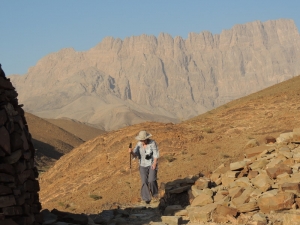 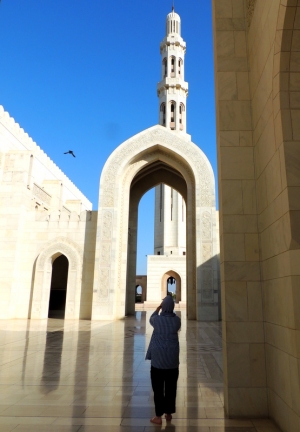 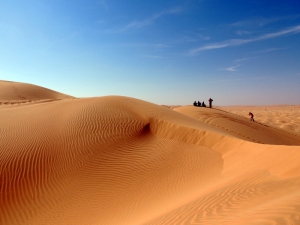 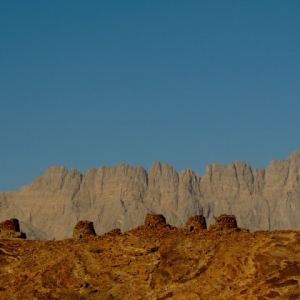