The Archaeology of the Bay of Naples

The Archaeology of the Bay of Naples

return flights from London, 4 star hotel, buffet breakfast, all lunches, 3-course dinner with drinks each evening, all entrance fees and expert historian throughout.

This comprehensive archaeological tour of the Bay of Naples and the events of AD79 not only includes the well-known and impressive remains of Pompeii and the superbly preserved Herculaneum but also those lesser known, but nonetheless important sites such as the seaside villas of the wealthy at Oplontis, possibly once owned by Poppeia, wife of the Emperor Nero; Stabiae, where the frescoes are amongst the most beautiful found anywhere in the world; Cumae, the first Greek colony on the Italian mainland; Baiae, a fashionable Roman seaside resort, and Pozzuoli, the main port of the early Roman Empire. Throughout you will be in the company of one of our expert historians: Roman Empire specialist Dr Andy Fear, a veteran guide and archaeologist, or Amanda Pavlick, a Roman archaeologist who specialises in the material culture of Roman cities and pre-Roman Italy. Both have excavated widely across Britain and Europe.

When Vesuvius erupted, pyroclastic debris was hurled more than twenty miles into the atmosphere, engulfing the entire Bay of Naples and beyond, killing thousands of people. Pompeii was not the only city to be destroyed - the inhabitants of all the neighbouring Roman resort cities, including Herculaneum and Stabiae, were also completely obliterated. The devastation wrought and the way the volcanic ash sealed and preserved everything it engulfed, has fascinated visitors since the first archaeological investigations at Pompeii in 1748. The fact that it has been the most famous archaeological site in the world for so long means that centuries' worth of repairs and restorations have added their own overlay to the Roman originals. Modern day archaeologists have to sift through not only layers of dust and ash to interpret this large city but also the theories and presumptions of the excavators that went before them.

Check in to our hotel in Castellammare di Stabia for six nights. Welcome drink and introductory lecture.

Spend the day exploring the heart of the ancient city of Poseidonia. The most dramatic sights are the three Doric temples; roofless, but still standing, these are among the greatest archaeological monuments in Italy. In the afternoon we visit the Museum which contains paintings and grave goods from tombs in and around Paestum. The most famous of these is the fresco from the 'Tomb of the Diver', the only extant wall-painting from a Greek tomb.

A whole day in Pompeii exploring the public monuments and private residences that best illustrate what life was like in this bustling port and market town. The fountains in the street, worn where thousands of people have rested to take a drink, the stepping stones, wheel ruts, corner shrines, bakeries, public baths, the brothel, street cafés and ancient graffiti – all of human life in AD79 is here when you know where to look for it.

Ancient Stabiae, founded between the 7th and 6th centuries BC, was one of the places chosen by the aristocracy of Rome to build their large luxury villas in a panoramic position on the edge of Varano Hill. It was here that Pliny the Elder met his death, probably during the last fatal surge of the pyroclastic cloud. We visit three impressive houses today - Villa San Marco, Villa Arianna and the Villa of Poppea at Oplontis, a grand residential building on an imperial scale, with a huge pool, and cleverly designed gardens.

During the eruption of Vesuvius, the buildings of Herculaneum were smothered by toxic gas and boiling mud which, as it solidified, prevented their collapse. Subsequently sealed under an airtight layer of volcanic rock, the partially excavated town now offers a unique insight into Roman life, with many buildings still with upper storeys intact and frescoes and mosaics in an excellent state of preservation. In the afternoon, we drive up the slopes of Vesuvius, taking the final stage to the summit on foot (a walk of around 200m).

A day exploring the area west of Naples known as The Phlegraean Fields. Cumae, the epicentre of the Greek colonization of the 8th century BC; Baiae, the home of pleasure palaces of Roman emperors; the Castello Aragonese which now houses the Archaeological Museum of the Campi Flegrei; and Pozzuoli, with its impressive amphitheatre begun by Roman Emperor Nero and finished by Vespasian.

The National Archaeological Museum, great treasure trove of the Bay of Naples and home of one of the most important collections of classical archaeology in the world. Among the notable exhibits are the Herculaneum papyri, carbonized by the eruption of Mount Vesuvius and the Alexander Mosaic, originally from the House of the Faun in Pompeii. Continue to the airport for our return flight to London. 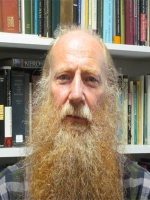 return flights from London, 4 star hotel, buffet breakfast, all lunches, 3-course dinner with drinks each evening, all entrance fees and expert historian throughout. 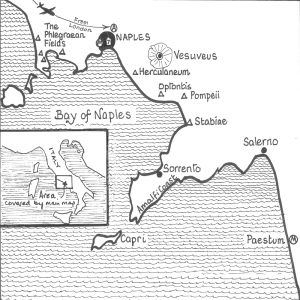 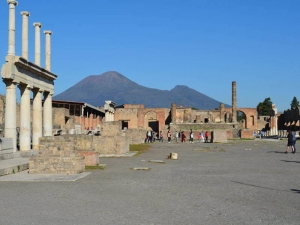 View of the Forum, looking toward the Tempio di Giove 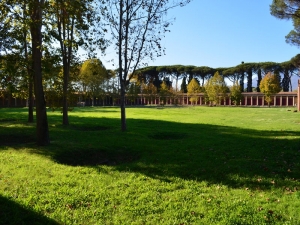 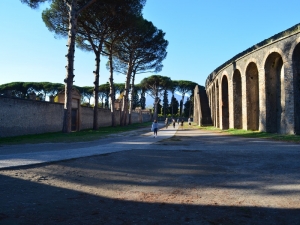 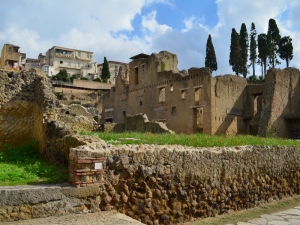 The juxtaposition of ancient and modern at Herculaneum 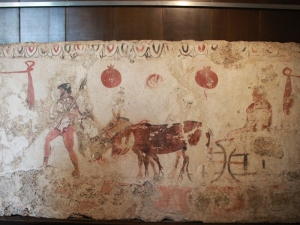 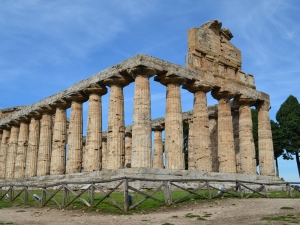