Straddling either side of the English Channel this tour visits a plethora of battlefields, castles, abbeys and churches to tell the fascinating story of William the Conqueror: the magnificent Falaise castle, the place of his birth and adolescence; the celebrated Bayeux tapestry; Caen with its chateau from where the Dukes of Normandy ruled and the abbeys which house both William and his wife Mathilda's last resting places; the battlefields of Val es Dunes and Varaville where William demonstrated his competence as a military leader; Pevensey Bay, from where he launched his conquest of England and Hastings, or rather Battle, where he soundly defeated King Harold to win the throne of England. The highlight of this battlefield tour is sure to be the magnificent re-enactments of the Battle of Hastings which will feature hundreds, if not over a thousand sumptuously armoured and uniformed soldiers.

Known to his contemporaries as William the Bastard, William of Normandy controversially inherited his title in 1035 at the tender age of 7. He was just 15 when he was knighted by his overlord, King Henry I of France, who in turn assisted him at the battle of Val es Dunes to win the fealty of the Norman nobility in 1047. And within ten years he had assured his own independence from King Henry at the Battle of Varaville in 1057. In so doing he had become a strong, efficient and brutal military leader and administrator who commanded fear and respect in equal measure both within and outside of his Duchy. Believing his right to the English throne had been usurped by Harold II, in early 1066 he spent 7 months meticulously planning his invasion which would culminate in victory atop of Senlac Hill on 14 October 1066 and see him crowned king of England on Christmas Day of that same year.

Day 2 – Bayeux and Falaise.
View the Bayeux Tapestry and visit the Norman cathedral. At Falaise we explore it’s recently restored chateau with its unique interpretation of the Dukes of Normandy. Thence to walk the unspoilt battlefield of Val es Dunes.

Day 3 – Caen and its environs.
At Dives sur Mer we see where William assembled his fleet and embarked for the conquest of England, and its church listing the names of his compatriots. Thence to Varaville where William used the rising tide to gain a tactical advantage. Our day ends back in Caen where we visit the Abbey aux Dames which houses Queen Mathilda’s tomb and L’Abbaye-aux- Hommes where William is buried.

Day 4 – Pevensey.
Travel by train to Ashford via Paris. Drive to Pevensey Bay, where William came ashore and follow his route across the marshes to Pevensey Castle built on the orders of William. Continue to Eastbourne and check-in to our hotel for four nights.

Day 5 – Battle of Hastings.
Today we will find ourselves on the battlefield of Hastings 950 years to the day that this pivotal battle was fought. We will look at the traditional and the newly suggested sites and allow you to weigh up the evidence and judge for yourself. We also visit Battle Abbey and the interpretation centre.

Days 6 & 7 - Re-enactment.
Although the schedule is to be announced, over these two days you can expect there to be a major re-enactment of the battle each afternoon. You will be able to wander through the army camps, question the soldiers, watch demonstrations of medieval fighting, archery and falconry and enjoy period fayre.

Day 8 - Depart.
Check-out at your leisure for your return rail journey to London Victoria. 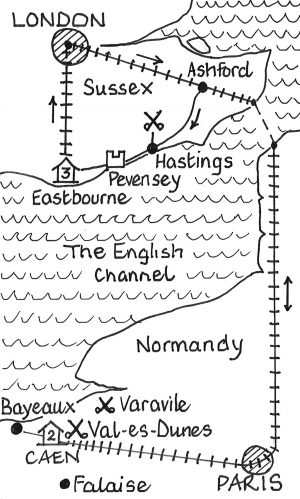