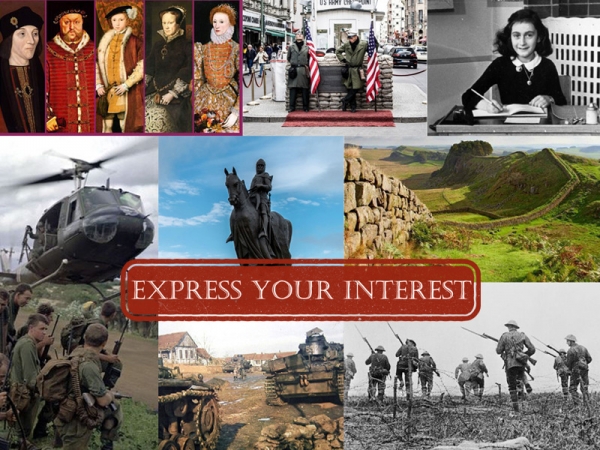 We have been working hard to come up with some brilliant tours that we are looking to run throughout 2020. You can register your interest in these tours by filling in the form at the bottom of this page.

By registering your interest in a tour you will be given an exclusive booking window to be able to book a tour before it goes on general sale.

All of the tours are listed below, but you can also view our mini brochure here.

Crete and Santorini - Lost World Of The Minoans, with Professor of Art History & Classical Archaeology Dr Rita Rousso (May)

Explore the lost world of the Minoans, from the Labyrinthine palace of Knossos to the frescoes of Akrotiri. Our itinerary is designed to immerse you in Minoan Bronze Age sites, culture, art and mythology.

In the company of expert historian Dr John Sadler we explore Fontevraud Abbey where Henry II King of England and Count of Anjou, his wife Eleanor of Aquitaine and their son King Richard the Lionheart, chose to be buried. We visit Angers Castle, Chateau Chinon, The Royal Apartments and castle of Loches, Chartres Cathedral and Rouen Cathedral where Richard's heart is buried.

Travel the length of Hadrian’s Wall, the most important site in Roman Britain, with fortifications, civilian settlements and temples. This World Heritage listed site is the largest surviving monument to the Roman army.

Elizabeth I's England was a realm under siege; threatened by Spanish invasion and domestic conspiracies. This unique tour visits the sites where this secret war was waged: ranging from torture chambers to grand country houses.

In the third instalment of our English Civil War tours, leading historian Nick Lipscombe examines the centre of England from Oxford to Worcester and the battles of Chalgrove Field, Cheriton, Newbury and Naseby.

Frederick The Great In Silesia - He Who Defends Everything Defends Nothing, with retired engineer-in-chief & author Maj-Gen John Drewienkiewicz (September)

Follow Frederick the Great's campaigns throughout German Silesia. Examine the 1757 battles of Breslau and Leuthen against Austria and the hard-fought battles of Zorndorf 1758 and Kay 1759 with the Russians. Ending with the climactic battle of Kunersdorf.

This tour focuses on four of the major engagements fought by British forces in the 7 years war in Germany. We take a close look at the battles of Minden 1759, Kloster Kampen 1760, Villinghausen 1761 and Wilhelmsthal 1762.

The Thirty Years’ War started as a religious conflict within the Holy Roman Empire, evolving into a power struggle for control of Europe. Set against a back drop of modernisation of weapons and tactical innovation in warfare, it changed the geopolitical face of Europe.

Spend time on foot exploring the little changed landscape of the battlefield of Austerlitz, discovering how the rolling countryside concealed the French troops.

A very special tour which takes in spectacular fortresses, unspoiled local villages and a way of life that has changed little since Wellesley’s time. Visit the magnificent fortress of Gawilghur, Ahmednagar & Daulatabad Forts & Assaye.

This tour explores the magnificent 'Big Sky' country of Montana. Enjoy the re-enactment of the battle of The Little Big Horn and the Black Hills of Dakota - the evocative landscape of the 'Old West'. See Mount Rushmore and the Crazy Horse Monument.

It was the most significant war in Europe since Waterloo, changing the face of the continent for the next fifty years. We explore the Battles of Wissembourg, Wörth, Spicheren, Mars le Tour, Gravelotte/St Privat and Sedan.

Travelling through rural India and staying at splendid hotels, we recount the dramatic and tragic events at Meerut, Delhi, Gwalior, Jhansi, Kanpur and Lucknow as well as the Taj Mahal and Lutyen's New Delhi.

We explore the much overlooked and forgotten story of the American involvement in WW1 at Belleau Wood, the Marne, the Meuse-Argonne and the St Mihiel Salient.

This five day tour to Northern France and Belgium visits the battlefields of Mons, Ypres, the Somme and Arras and puts the whole war into perspective geographically, chronologically, strategically, tactically and technologically.

Walking the Somme - The Battle Explored On Foot, with WW1 author & lecturer Simon Jones (May)

From the preserved former front line, to woods still scarred by trenches and bunkers; walking the chalk downlands of the Somme battlefields is to understand the past through the landscape. Explore the catastrophic opening day of the Battle of the Somme in 1916, the deadly crucible in which modern warfare was forged.

Spend time underground exploring warrens of tunnels, chambers and passageways, many of which are littered with extant evidence of their former occupiers. Whilst above ground we will hear stories of Flanders, the Somme, the Argonne and the Aisne.

Advance to Victory 1918 - The Beginning of The End, with WW1 expert Dr Bruce Cherry (Autumn)

Explore each of the major events of 1918, visiting iconic battlefields such as Villers Bretonneux, the Saint Quentin Canal, Le Quesnoy, Mons and, fittingly, the site of the November armistice signing at Compiegne.

The Gallipoli Campaign - Damn The Dardanelles: This Will Be Our Grave with, WW1 expert Dr Bruce Cherry (May)

During this tour we will visit and examine the main aspects of the Gallipoli campaign: the naval assault, the problems of landing against defended beaches at Cape Helles, control and communication issues, the miracle that was ANZAC, the conditions at Gallipoli & the Suvla Bay fiasco.

Italy In The First World War - The Campaigns In The Dolomites, with military historian & author Maj Gordon Corrigan MBE (Sept)

Set amongst some spectacular mountain scenery, the infrequently visited battlefields of Isonzo, Caporetto, and Nervessa have changed little over the years. Marvel at the precarious positions occupied by both sides. It is also where a young German officer called Erwin Rommel began his rise to fame.

Follow the fortunes of Lawrence of Arabia in the desert at Wadi Rum, explore the stunning rock hewn city of Petra, the Dead Sea and the Dead Sea Scrolls, the Crusader Castle at Kerak and the wonderfully preserved Roman remains at Jerash.

This tour focuses on the heroic and often untold stories of the Medics during the Great War, like Noel Chavasse, the only man to be awarded the Victoria Cross twice. We also attend the Last Post ceremony at the Menin Gate.

Visiting St Petersburg and Moscow, you won’t just see where the Russian revolution evolved, endured and eventually exploded, but also immerse yourself in one of the most unique and fascinating cultures in the world.

Based on his internationally acclaimed books on the Battle of the Bulge. Belgian academic historian, Peter Schrijvers, brings to life the decisions of commanders under extreme pressure, and the experiences of soldiers and civilians in desperate circumstances.

Guided by leading Holocaust historian Prof Tim Cole of Bristol University, this tour through Prague, Vienna and Budapest provides new insights in to the horrors suffered in Central Europe at the hands of the Nazis, and leans heavily on the content of his book 'Holocaust Landscapes’.

This tour highlights the plight of the Jews in Latvia and Lithuania, revealing the atrocities in Riga, Kaunas and Vilnius, the suffering in the Ghettos and the mass shootings at Paneriai and Rumbula Forest. Learn about armed Jewish resistance groups and the Japanese vice consul, Chiune Sugihara, who saved over 5,000 Jewish lives.

Anne Frank - In The Footsteps Of A Young Girl, with author & lecturer Professor Tim Cole (Sep)

Follow in the footsteps of Anne Frank and those who hid with her. Starting in Amsterdam we learn about life at the time of occupation and their deportation to Westerbork transit camp before travelling to Bergen-Belsen and Neuengamme concentration camps.

Col Bob Kershaw examines the Army Group North advance. We look at the actions fought by General Hoepner's Panzergruppe 4 from Memel through Kovno and Dvinsk to armoured clashes at Ostrov and the intense fighting around Pskov up to the gates of Leningrad. This tour offers a rare insight in to the campaign from seldom visited locations.

The battles for the Bataan peninsula and Corregidor Island will always be remembered for the fierce defence by American and Filipino troops, fighting side by side against overwhelming odds, their defeat and forced “Death March” to Cabanatuan POW Camp. Followed by the daring rescue immortalised by Hampton Sides in his book Ghost Soldiers.

September In early August 1944 both the Allies and the Germans were rapidly approaching the endgame in the battle of Normandy. The Americans surged forward from the west and the British/Canadian effort finally broke the stalemate around Caen. Seizing the opportunity to encircle the Germans, the Allies launched an attempt to envelope the German forces in Normandy.

Explore The Battle of Britain, the most famous aerial conflict in British history. In this 80th Anniversary year we follow in the footsteps of those brave ‘few’ who took to the air to defend our skies. Discover how leadership, courage and technology, turned Britain’s darkest hour into her finest.

Follow the fascinating story of the high risk landings and hard fought actions along the dramatic coast lines to the towns of Chania, Rethymnon and Iraklion, the White Mountains and down to the crystal clear waters of Sfakia.

A myriad of military history as we explore the Russian victory at Gross Jagersfdorf in 1757, the Napoleonic battlefields of Eylau and Friedland, the iconic Tilsit, the initial Russian 1914 successes at Stalluponen and Gumbinen and the dramatic Russian assault of Konigsberg's extant 19th century fortifications in 1945.

Explore the hidden world of spies and how the cold war raged in Berlin. Discover secret listening tunnels dug by the CIA and MI6, walk across the Glienicke Bridge used for spy swaps, visit the former HQ of the feared Stasi, and step inside a former Stasi prison. We also view iconic Check-Point Charlie and remaining sections of 'The Wall'.

In which we compare the advance and retreat of both Napoleon’s and Hitler’s armies between Smolensk and Moscow in the heart of rural Russia. We will look at the battles around Smolensk, Viasma, Moscow and of course, Borodino, the tour coinciding with the dramatic re-enactment of the 1812 battle.

Former war correspondent Patrick Bishop looks at three devastating 20th century conflicts. The shots at Sarajevo which began WW1; the resistance of Tito's partisans in WW2; and the savage civil war of the 1990s.

Please fill in the form below, and click on Send