Turning the Tide - the British Capture of Fort Duquesne 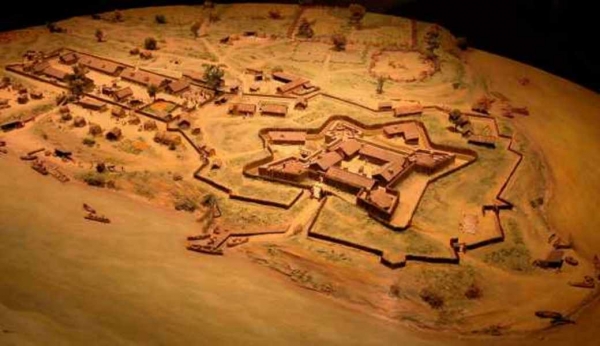 Fort Duquesne is one of the most important sites associated with The French and Indian War (1754 - 1763). It’s construction by the French in 1754 was a catalyst for that war as the British and French competed for control of the Ohio Valley. It’s capture by the British in 1758 was a turning point, leading to the British invasion of Canada and the eventual removal of the French presence in North America.

Built on the confluence of the Allegheny and Monongahela Rivers where they become the Ohio River, Fort Duquesne was a point of immense strategic importance. It enabled the control of the Ohio Valley and the resources it yielded, as well as control over the new fur supply routes starting in Canada. The French built the fort to gain access to these supply routes, but the British, seeing the advantages it gave them, quickly claimed the territory as theirs, and assembled an army to enforce it. And so began the French and Indian War; a pre-cursor to the global conflict known as the Seven Year War.

There were many early attempts by the British to take Fort Duquesne, but they all failed. In 1754, a young Major George Washington led 300 Virginians towards the fort. They ambushed a campsite of about 30 Frenchmen, but rather than advance onwards, Washington urged his men to build an opposing fort, Fort Necessity. Three months later, French and Indian forces attacked Fort Necessity, resulting in Washington losing thirty men, agreeing to leave Ohio County for a year, and the destruction of Fort Necessity by the French.

The most devastating attempt to claim Fort Duquesne was ‘Braddock’s Defeat’ in June 1755. With the aid of the now Lieutenant Colonel Washington, General Edward Braddock led 1400 troops towards the fort. Ten miles from their target, the larger force met an army of 900 Frenchmen, Canadians and Native Americans. Unused to American frontier warfare, the British forces were massacred, with 977 British being killed or wounded, including General Braddock. In contrast, the French and Indian army only had 39 casualties.

It took the British until 25th November 1758 to successfully take Fort Duquesne. Charged by British Prime Minister William Pitt to drive the French back into Canada, General John Forbes advanced his force of 6000 men towards the fort, including 2000 Virginian militiamen under the command of Washington. Unsure of the size of the French garrison, Forbes sent Major James Grant with 850 soldiers on a disastrous scouting mission. Grant set a trap for the French and Indian soldiers, but was caught in a trap himself, resulting in 300 casualties and his own capture.

Initially deciding to delay an offensive until the spring, Forbes was surprised to learn from a French prisoner that the fort was occupied by only 200 French regulars, who suffered from low moral and dwindling food supplies; their Indian allies had already deserted in large numbers. The walls of the fort were only six feet thick, meaning that they would be susceptible to British cannon fire. Forbes immediately ordered his men to begin the tricky final advance on Fort Duquesne.

Faced with complete disaster if he were to fight back, the French commander of Fort Duquesne ordered a withdrawal on November 24th, the night before the British were due to attack. Under the cover of darkness, the French set Fort Duquesne on fire and escaped down the Ohio River. The next day, Forbes and the British claimed the burning husk and the land where the fort once stood.

A contingent of British forces remained at the site to construct a new fort and maintain control of the strategic location. The new ‘Fort Pitt’ remained under British control until it was taken by colonists during the American War of Independence.

The capture of Fort Duquesne, coinciding with the capture of Fort Frontenac and the fortress at Louisbourg, marked a major turning point in the Seven Years War, contributing to driving the French back into Canada. The massive blow to the French forces encouraged the mass desertion of France’s Indian allies, who could see which way the war was going.

Fort Pitt was later used by the British as a location from which to focus the successful invasion of Canada.

Our French and Indian War of 1754 - 1763 tour visits the site of Fort Duquesne and the still standing Fort Pitt, as well as exploring the Fort Necessity battlefield and the final resting place of General Braddock. It then follows the British advance in to Canada. You can now book this tour, or call the office on 0345 475 1815.