The True Story of The Rifles in The Peninsula

The True Story of The Rifles in The Peninsula

Bernard Cornwell’s popular ‘Sharpe’ series was based on real-life characters and events. By juxtaposing Cornwell’s books with contemporary diaries, Ashley Truluck, (Chairman of the Society of Army Historical Research) has produced a fascinating tour which tells the real story of Wellington’s legendary Light Division. By the nature of their role, The Light Division - and The Rifles in particular - served in every significant battle of the Peninsular War, and in many exciting missions and skirmishes in between. This gives us a wonderful vehicle for visiting a representative cross-section of the Peninsular campaign, and its more colourful regiments, characters and locations – and to do so in chronological order.

We travel along the famous Tagus valley and up over the mountain passes of central Spain to our base in the unspoiled fortress of Cuidad Rodrigo. After following the exploits of the Light Division amongst the rugged splendour of the ravines and fortresses along the Portuguese border, we head into a national park in Spain. Finally we head out across the wide open plains of Northern Castille via magnificent Salamanca and Vitoria. We will be staying in excellent historic hotels and sampling the local hospitality and cuisine en-route.

The embryonic Light Division – consisting of the 95th Rifles, 43rd and 52nd Light Infantry (later to become the famous ‘Royal Green Jackets’ and now surviving in the British Army as ‘The Rifles’ regiment) – was founded and trained by Sir John Moore. When Great Britain’s first foray into The Iberian Peninsula ended in failure in the winter of 1808/9 it was The Rifles who covered Sir John Moore’s retreat to Northern Spain, leading to his death and the British Army’s successful evacuation by sea from Corunna.

We will pick up the story of The Rifles with their return to the Peninsula in 1809 and their epic march from Lisbon to Talavera. We then follow them as they cover Wellington’s withdrawal back into Portugal, holding the rugged mountainous border region against a far larger French force whilst Wellington regrouped and retrained his main army behind them. We then drive deeper into Portugal to learn how the Rifles avenged the death of Sir John Moore by playing a pivotal role in Wellington’s classic defensive battle on the magnificent ridge at Bussaco in 1810. We then follow their footsteps as they spearhead Wellington’s successful advances into Spain in 1811 and 1812, capturing the border fortress of Ciudad Rodrigo, rescuing Wellington’s beleaguered right wing at Fuentes de Oñoro, and on to victory at Salamanca and finally, in 1813, playing a key role in the victory at the battle of Vitoria, gateway to the Pyrenees and France itself.

"A fantastic tour! Ashley's reading of memoirs greatly enhanced the trip, brought tears to my eyes in fact. A lovely group of people and wonderful locations"

Day 2 – Talavera.
We pick up The Rifles as they arrive at the closing stages of the battle of Talavera after an epic forced march of 360 miles from Lisbon. On to the bridge and fort at Almaraz we see at first hand what was involved in taking and defending remote outposts. Then over the beautiful Sierra de Gredos mountains to Ciudad Rodrigo where we check-in to our historic Parador for 3 nights.

Day 3 – Light Division Country.
We spend a fascinating day in the rugged highlands along the Portuguese border: We start with a visit to the Roman bridge over the spectacular gorge at Barba del Puerco ('Pig's Beard') which was the setting for an heroic stand which has gone down in Rifles history. A few miles south is the newly-restored Fort Conception, spiritual home of the Light Division, where we enjoy a relaxing lunch break before making our way down to the River Coa to see how the Light Division escaped being cut off by vastly superior French forces thanks to excellent leadership by junior officers. Finally we visit the Portuguese border fortress of Almeida overlooking the River Coa and hear its amazing story.

Day 4 – Bussaco.
Today we take a day trip into Portugal to visit the iconic battlefield of Bussaco, set in a beautiful national park. We see where the Light Division held up a whole French Corps, viewing the scene from the very windmill from which their operations were directed. We also visit the famous Bussaco Palace Hotel on the site of Wellington's headquarters.

Day 5 – Fuentes de Oñoro and Ciudad Rodrigo.
We visit the unspoilt and atmospheric village of Fuentes de Oñoro (‘Fountain of Gold’) and also the plain in front of it where the Light Division’s brilliant tactics rescued Wellington from probable disaster. Then back to Ciudad Rodrigo to hear the story of the Light Division’s heroic storming of the fortress before travelling on to Salamanca.

Day 6 – Salamanca.
We spend two nights in our city centre hotel in Salamanca – allowing ample time to explore both the magnificent panorama of the unspoilt battlefield and to enjoy the sights and cuisine of this beautiful cathedral city.

Day 7 – Vitoria.
On to Burgos where we briefly discuss why this was the only fortress Wellington failed to take. And then on to the great amphitheatre that forms the battlefield of Vitoria – where the Light Division’s dash and initiative set the scene for a decisive victory over the French which in turn set the seal on eventual success in the Peninsular War.

Day 8 – Bilbao & Home.
After a leisurely breakfast we take a short trip to Bilbao for our return flight to the UK. 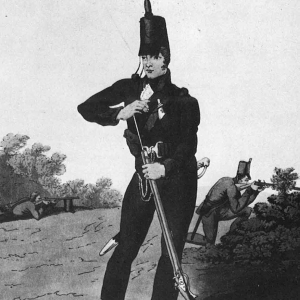