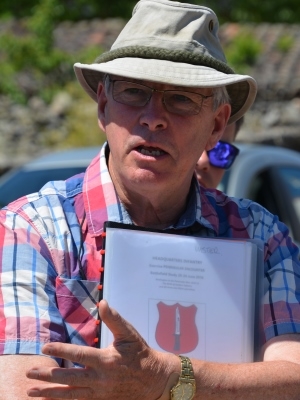 On scale and reach: Alexander the Great or Napoleon. But on results: Wellington  he won every battle he fought and almost always against superior numbers

Salamanca: Almost completely preserved, totally accessible, beautiful countryside topped off by the dramatic Arapiles hills  which make terrific viewpoints from where the whole panorama can be viewed, and its a great battlefield to walk.

There are so many good books coming out just now, especially on Waterloo and the First World War. But for durability and sheer enjoyable reading I keep coming back to the classics of each era: Wellington: The Years of the Sword (Elizabeth Longford); The Reason Why (Cecil Woodham-Smith), Goodbye to All That (Robert Graves) and Quartered Safely Out Here (George MacDonald Fraser).

Identifying the exact time and place where the Scottish ancestor of an American guest fell at Salamanca.

Napoleons under-estimation of Wellingtons generalship at Waterloo. But invading Russia was pretty dumb too  and Hitlers repetition of the same mistake was even dumber (see 8).

Cant think of one that has done justice to its subject  although the opening scenes of Saving Private Ryan were about as realistic as two dimensional film can get.

That the British Army was lions led by donkeys in the First World War  see my blogs on the subject on TCE newsletters.